Was out of town this weekend.
Received a notification from my RING doorbell not Wyze that this is happening.
I have a Wyze outdoor cam that is positioned to cover quite a bit more than the Ring doorbell and Wyze saw nothing.
Pretty embarrassing for a company that keeps talking up a big game about how much better they’re getting.
I’ve supported Wyze for many years now and have bought at least 15 devices but keep getting let down by poor performance and reliability.
Unfortunately it’s time for me to jump ship.
Very disappointed!!!
Video attached. Ring, not Wyze.

I’m having the same issue with my V3 cameras.

What are the sensitivity settings and notification settings on your camera?
Do you have Cam Plus on this WCO?

I’ve tried high sensitivity and low. Doesn’t make a difference. I think the problem at night is the IR/light focus… Because the came is mounted in a place where I have a couple of plants. Not in the way at all, when it’s dark, the camera misses the subject walking up bc it focuses on the plants instead.

Because the came is mounted in a place where I have a couple of plants. Not in the way at all, when it’s dark, the camera misses the subject walking up bc it focuses on the plants instead.

What did you have your wco settings at, at the time of the incident?

Watching the ring video, I am assuming the path the perp walked up was the same path they used to exit, which on the wco picture is behind the vegetation on the right when the path is the closest. 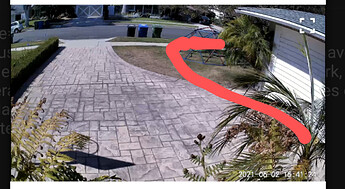 And you said the plants “are not in the way at all”, then the “camera misses the subject walking up bc it focuses on the plants instead.”. Not sure if you are referring to the motion detection method or the camera just recording the subject walking. The WCO has a pir sensor, which detects infrared signatures as a way of detecting motion and waking up the camera do begin recording. The range is maybe 25-30 feet for a good detect. It detects motion more reliably going side to side than if it was coming towards the pir sensor.

Does the wco catch you if you walk the same path as the subject? I think the “miss” is probably a combo of range from pir when they were not behind the plants, sensitivity settings and direction of motion.in relation to pir.

Other things at play here maybe:
Are you using camplus or the free cloud storage? What’s your cooldown settings if in the latter?

Just my analysis of the info provided.

May have missed it, but do you have CamPlus?
Did you change your Cool Down period to 1 minute or is it set to 5 minutes which I think is the default?

What could have happened is the shrubs could have triggered the WCO motion and then was in the cool down period when the thief came up the path.

As @Omgitstony asked, does it catch you coming and going from the house?

Since it is a WCO, why not try moving it next to or near the Ring Camera to see if it catches you as well.

Thank you guys for trying to help.
I’m not subscribed to cam plus and my setting were high sensitivity with a 1 min cool down.
I don’t have a previous recording around hat time of shrubs swaying in the wind or anything.
The camera does pic me up during the day but need to see if same goes for night time.
This is really my only option for mounting location.
Problem with these cameras,like you said, is they start recording the subject when it’s already too late and no longer in the frame. Or catches the tail end of the event.
In this case, nothing at all was caught.

I agree with the statements above. If the face of your camera is pointed as shown in the blue/yellow arrow you won’t get much. Try to move the cam so the face is in the direction of the red or green line. Also you can record more than 12 seconds without Cam Plus. Put a good 32 GB SD in the camera, set it for schedule event recording, 30 days, no cooldown, max video length of how ever many minutes you want, I have mine set at 2 min. The cam will record as long as motion continuous. The face of my cam in attached video is pointing at the SUV in the driveway at the left. 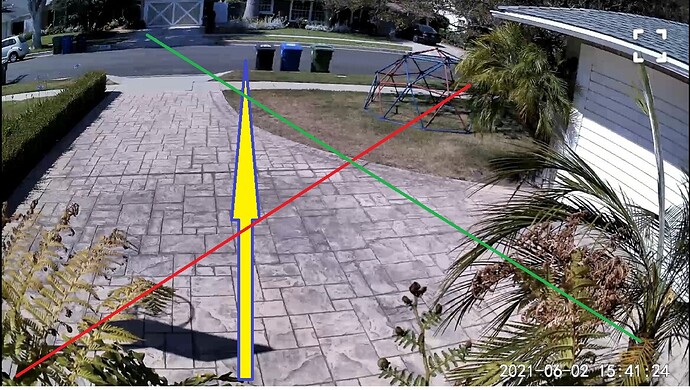 I just bought 2 outdoor cams with base station and have cam plus subscription. No matter what I try, neither cam will record anything from 12am-5am, when it is dark. I even have motion lights in my drive that will light up. I have another cam brand in the window and it picks up everything. I stood in front of my wyze cam at 1:30 am the other night and waved my arms for a good 20 seconds and it picked up nothing, This has to be a global issue because both my cams do this and a friend of mine out of state has 2 of them and is experiencing the same thing.

At the end of the day guys, you get what you pay for.

I hope your outdoor cams are indeed outside and not looking through a window,

My outdoor cams records cats and other critters at all hours, day or night. 2 of them have the IR lights on and the other 2 do not because I also have motion detection lights. Do you have an SD card in the outdoor cams? If you do try a scheduled event recording. For a test you could set it for motion events 1 hour, video length 1 min, click start now and move around in front of the cam. I have no idea what kind of setting besides maybe some kind of rule that would keep them from recording at certain hours?

They are indeed mounted outside and are not behind any windows. I do not have SD cards in them. I don’t understand why I would need them since everything works fine during the day. Even at 11:59 pm it still picks up motion, but anything in the middle of the night, it just seems like the cameras go to sleep on purpose. Very annoying. The main point of having cams for some people is because most crime happens in the middle of the night,.

I agree with @Antonius , do you have any scheduled rules for motion detection setup?

Does live view work after 12:00 AM ? How about your network, does that have any settings that turn it off at night or after 12:00 AM. I have no other ideas, the cams don’t care what time it is,

How about your network, does that have any settings that turn it off at night or after 12:00 AM.

If it does, I haven’t set them up manually. I just installed these last week. After checking into the router settings, I have confirmed that zero to little traffic is occurring at these times. 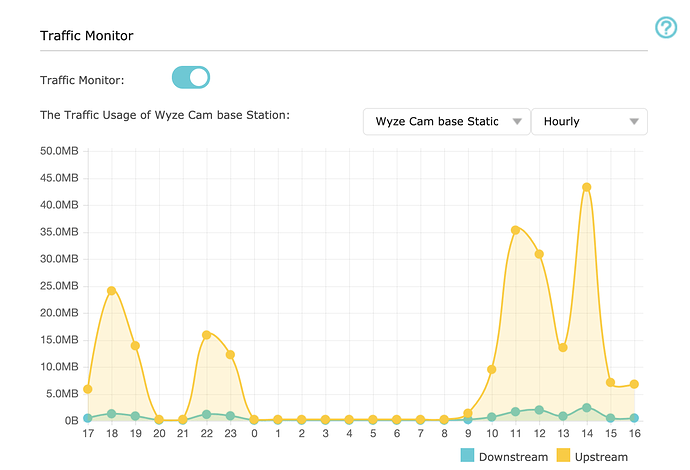 I mean, this is happening to a friend of mine in a different state running on a completely different network setup. I think it has something to with something on Wyze’s end. I have no scheduled rules set up either.

This is the only cam I have on Cam Plus and the events look like this every day/night/early morning. 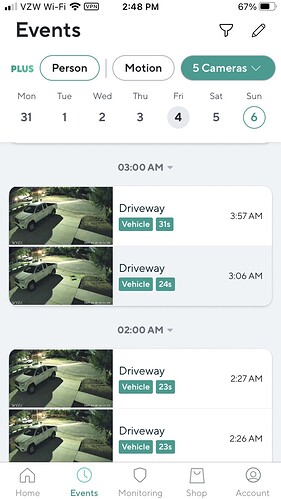 Hey thanks. I really appreciate all your feedback today. I just wanna figure this out. I made some changes in my router settings and rebooted it, but my buddy in another state is also experiencing this. So hopefully we can get it figured out. Are you using the SD cards in yours and manually creating scheduled recordings during the night? That may be the route we need to go, just don’t understand why we would need to just for night recording, when day recording works just fine w/o using SD cards.

I had issues with my Cam Plus accounts on my 4 outdoor cams. Support and engineering is still trying to figure it out but I cancelled 4 of the 5 licenses, I could not download the event videos from the WYZE Cam Plus server from the WCO so I turned it off and I could download again. I kept the one CP license for the V3 that I have and have never had any issues with down loads. I put good 32GB SD cards in all 4 WCO, I set them all up on scheduled event recording. I currently have them set for Event recording, 10 days but you can go to 30 days. I have set no cooldown period and the max length of each event video to 2 minutes, you can go up to 5 Min. Basically if the cams detects motion they will record until the motion stops or it reaches the 2 min. mark they it will start a new event video. The only down side I see is you will still only get a 12 second event video notification from Wyze and if you think things continue you have to take the SD out of the cam to view everything that was recorded after 12 seconds. I watched one last week that had an event video of 1:45.
It just baffles me that your cams will not record during a certain time. You didn’t answer if you can see the Live view after 12:00AM. Of course I don’t want to stay up that late just to test a camera either but I know mine do record during the early hours.