The person is moving on a bit of a diagonal toward the camera, but it doesn’t seem to matter at times even if they are walking diagonally across the frame.

It also seems to fluctuate on when it begins. Sometimes I get a few steps before they reach the door and others they are pretty much inside already.

Also cars driving into the driveway are not recognized unless they pull up very close.

On the other hand, a garbage truck driving down the street seems to trigger it well. Maybe because of its huge heat signature.

I have not bought cam+ since the detection seems poor and am hoping it improves before I purchase.

Any thoughts? Anyone else have issues like this? Is my camera faulty or are they all this way?

(also in general things don’t seem to always work, like my events to turn things on and off. It’ll say it worked in the app event history, but the light or camera will not be on like it says)

Thanks in advance for your help!

The outdoor cam is meant to pick up horizontal movement (left to right or right to left) across the pir detection zone. Objects/people coming toward it head on (top to bottom or bottom to top) won’t be detected as well.

The delay to recording is proboly the “wake to record” time. The WCOs are in a “sleep” state untill motion is detected by the our sensor, then that wakes up the camera and then the recording starts. This usually take a second or two. You can test this by approaching the camera from out of view, then waving your hand ten times infront of the camera. Wait to receive the event and then count how many waves you see? Now you know the wake time by how many waves you don’t see on the event. You can improve detection by remounting the camera to a place where motion travels sideways across the cameras view (like @towelkingdom stated), or just angle the camera more at it’s current spot if able. If you post a picture of your camera view I’d say your could get a few tips from the community here.

I just did a test where I walked down the street from the left, then across the driveway towards the camera. It did not record until I had the door open and was on my way inside. Here’s the pic of my cam positioning. Any thoughts?

That’s correct its due it PIR all of mine do it as well, nothing we can do,I just added V3 Camera in the hi traffic area problem fixed.

Well that’s unfortunate! Thanks for the help.

I did try it in my house and seemed to have drastically better results for some reason. Even coming toward the camera. It was a lot closer to the hub and I didn’t start as far back however.

I suggest point the face in the camera in this direction, the PIR zone is very wide. 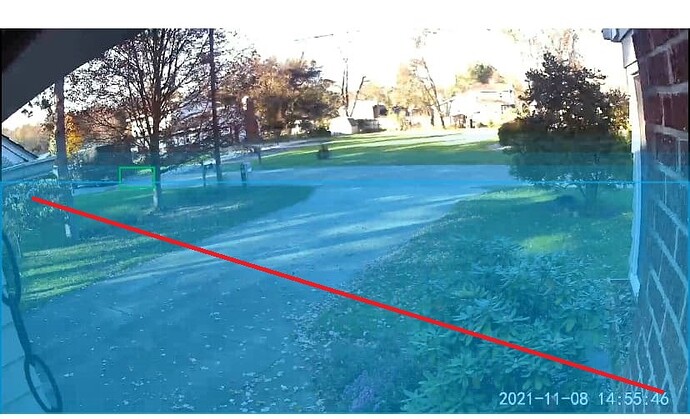 One of mine. Face of cam is pointing in direction of red line. 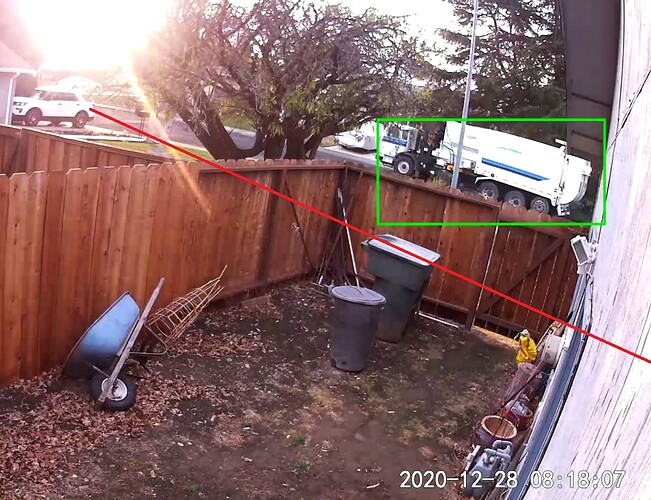 That is the latest base station beta release which was announced last week and gradually rolled out to users since the announcement.

Able to remount the camera to that soffet/corner of the house on the upper right corner of the picture? Then aim the camera more to the left so that the travel along the driveway is left to right ir right to left not directly towards or directly away.? One option.

I have to test it a bit more but, I did have one better result tilting the camera to the side. Only problem is at night the soffit vents blow out the white balance and I can’t see anything. Might have to re-mount elsewhere. Any suggestions on making a removable mount? I’m using double sided tape but it’s difficult to get off.

I had luck with the mounts for one my Blink cameras using “nanocell” tape. Plenty of vendors on Amazon sell it. It is that clear relatively thick (about 1/8") tape that is advertised as washable and reusable (and yes, you can, but as it tends to stretch upon removal it may not be practical).

Given my experience with the IR on cameras, even that chain alone that close to the cameras would blow out the night vision. You really don’t want anything within several feet of the camera’s view if you can avoid it, but especially anything that shows up bright in IR light.

Is there anything in your yard (e.g., a tree) you could mount the Outdoor Cam on?

There are 2 issues. First you have to use your phone with the WYZE app to check the signal where you want to put the cam and see if it is at least 2 bars. The IR lights are reflecting off the house in you current location. I would try the left or right side of the garage door if you have a good signal at the cam. On the right side have he face of the cam pointing left, left side pointing right. I assume you do not want to drill a bunch of holes in the siding but maybe you can us duct tape or similar for test purposes? My siding is T-111 wood siding so some small holes were Ok I just fill them with caulk and paint over them. 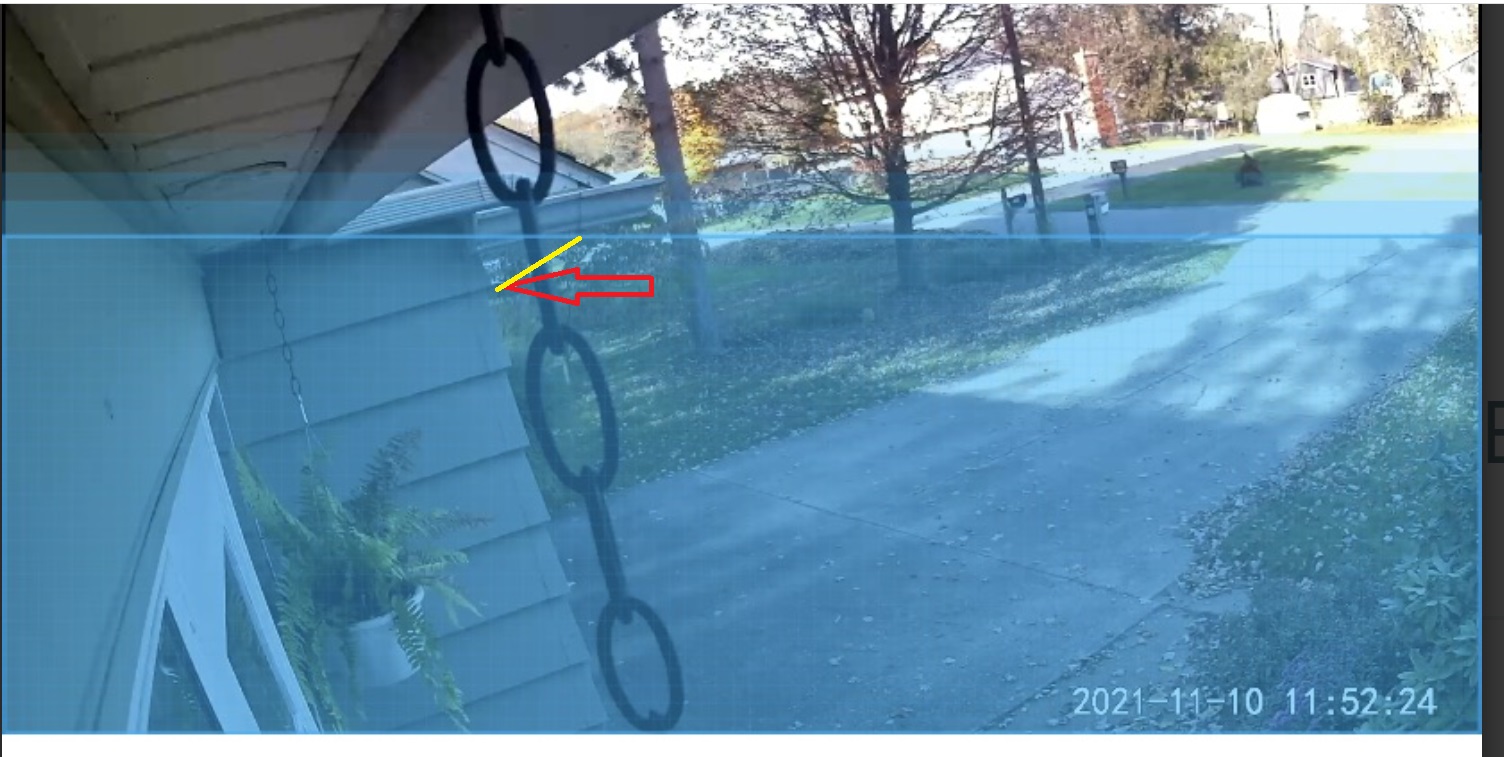 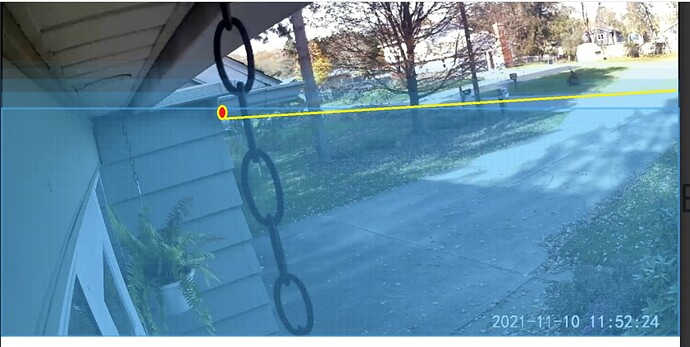 One issue I see with mounting it where you suggest is PIR sensors tend to work better with objects moving across their view rather than toward them.

Frankly, I would be tempted to strap it to the trunk of that tree closest to the house in the above view (assuming a good WiFi signal there).

That’s true due to PIR decode,we have ours set on 90,I would move the camera closer to the driveway,and point it more down so at nite you won’t get the reflection