The past 6 months my five WYZE cameras have been disconnecting and reconnecting randomly…
I have a mix of V2s and V3s along with pan cams.

These random disconnect and reconnect problems often result with one camera not working one day then working a few days later than failing again another day later than another set of cameras failing and some other camera failing to reconnect some other time.
All other devices in my home such as handheld phones laptops and anything else that needs a Wi-Fi connection have been Rock Solid.
The wyze cameras were good for literally for months and then a few months ago one of the Wyzes updates broke all the cameras?

If anybody has any other ideas of things to try afeel free to let me know.
Like I said all other devices on my wifi network such as cell phones laptops and other Wi-Fi devices and remain connected rock-solid only the wyze cameras become extremely unreliable recently.
I’ve Got a Sinking Feeling in the pit of my stomach wyze is just junk and they throw up patches without any regard of what those patches may do to their cameras.
I used to praise wyze cameras now I would never, never ever recommend them to anyone… especially since now wise has drastically increased the prices and all their cameras are looking for other ways to pump money out of customers…
That’s fine but your cameras need to be reliable.

Have you tried installing an older firmware version? I was having a lot of issues, especially with one V3. I loaded the RTSP firmware on all my cameras, which is an older version than production, and my problem went away.

Sadly I have noticed the same issue with cameras disconnecting at random. It’s happened to me on multiple occasions when I have been on vacation. That’s not good from my perspective.

I was considering going all in on Wyze products (cameras, sensors, plugs, lights…), but now I am wondering if a different path such as Apple HomeKit compatible devices would be a better route for me. I’d rather pay more up front for devices that work reliably than wonder if they will working when I need them to.

If anybody has any other ideas of things to try feel free to let me know.
Like I said all other devices on my wifi network such as cell phones laptops and other Wi-Fi devices and remain connected rock-solid only the wyze cameras become extremely unreliable recently.

Do you have other devices on the 2.4 GHz band of your router that work fine?

I had to replace my sister’s router a while back because her 2.4 GHz band became intermittent. Her phone, etc on the 5 GHz band had no issues.

Yes that’s what I said twice? my network has several things running on that on the 2.4 and they are Rock Solid stable… only wyze cameras are unstable.

I have no idea how you would install older firmware on Wyze cameras… besides even if I did Weis would come along and forced one of their broken patches on the cameras all over again?

You’re right I’m very disappointed in Wyze. I used to tell people about Wyze. Now the only thing I can say stay away from Wise because they’re getting expensive and their junk. Even when the cameras do work the microphones in them are absolutely horrible. Seems Wyze has killed the Golden Goose of quality product at a good price… now they’re just expensive junk.

come along and forced one of their broken patches on the cameras all over again?

One of the reasons I installed the RTSP firmware is that there aren’t any forced upgrades on it, right now.

Same continuous connection problems. Five cameras, different models. Really unusable. Trashing these cameras and going for a different brand. I had really gotten into Wyze products, but this does it. I had problems with their contact sensors too. Really bad products. Good luck to all of you users.

Same here, exactly. While I watch the reliability of the camera system deteriorate (e.g., my 3 Cam V3’s disconnect from wifi randomly), I still get regular marketing emails from Wyze about new products. Those just annoy me.

I was having similar issues. What fixed it for me was changing the wireless channel to 6 in the router. From what I understand, WyzeCam v3 is a bit stupid to work on Auto channel.

One potential issue could be interference from other devices. I have three Wyze cameras at my mom’s house - two V2s, and one V3. They go online and offline intermittently, so it’s nearly unusable, but my mom went on vacation yesterday, and they’ve all been working perfectly. I think maybe either her laptop or her iPhone is interfering with the Wyze cameras, which seems ridiculous. My other theory is that there was also an Amazon cloud outage a few days ago, so when it was brought back up, maybe it fixed something. We’ll see in a few days.

I just disconnected all my 13 wyze cams from my wifi. After firmware version 4.36.10.2864 was pushed out for the v3 cams the wifi started getting slow and all the cams would randomly drop offline and have to be rebooted. The wyze cams were only used occasionally to live stream for a minute. Called support and they recommended rolling back to an earlier version. This is unacceptable. If wyze can push out broken firmware they can push out the fix. I have a tp-link deco wifi mesh router with 43 connected devices(about 10 directly on eithernet) and everything else is working fine with the wyze cams shutdown.

I guess I should feel lucky that i don’t (yet) have these issues that others have.

I would also recommend setting up a rule to automatically reboot every camera at least twice a week. These are no different than cellphones and computers that need routine rebooting. The rule even has a history that shows if the auto-reboot was successful… 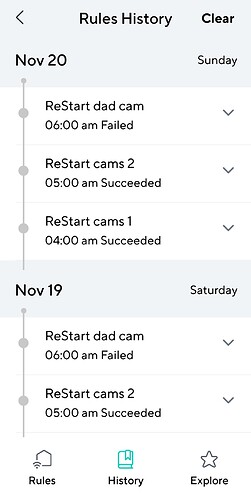 Oh wyze one, do the rules work when the cameras are offline like what is happening to me? I will test. But, I’m thinking if the rules are working why not the rest of the camera? It takes manual reboot(power cycle) to get the cameras working again. What if the camera goes offline before the reboot and I’m without a camera during that time. If rebooting is the answer then why not reboot every hour or minute. You get my point. Maybe include “rebooting required” in the description. In addition, your “routine rebooting” seems to apply more to wyze cameras rather than other manufacturers products. I have 2 cameras from Famisafe Wireless which I can’t find on Amazon anymore that never need rebooting even after switching out the wifi router. Also, there are no constant firmware downloads. My 3 Teckin smart plugs and 4 Teckin smart switches always work and never need rebooting. They just work.

I was having issues as well, but i found the fix.

i had Spectrum internet, 300mbps download bandwidth, however my upload was a measly 10 mbps on average. i switched to AT&T fiber 1 GB upload and download. the 1 GB cured a lot of disconnects i was having.

I also upgraded my router for a larger distance coverage. I had the TP-Link AC2600, which after upgrading the internet upload speed, the wyze cameras were having A LOT less disconnects and also able to watch the view.wyze.com video’s for longer periods of time before they stopped. went from 5-10 min view periods before it would stop to 1-3 hours. a huge difference! however this wifi router could not do more than 400-500 mbps over wifi.

so i also upgraded my router to the Netgear nighthawk RAX 120v2, hell of an expensive router, i never thought it necessary. but it totally is for not only the distance coverage, but to actually get the fiber 1 GBs wifi speeds available over wifi. not only is the distance coverage great, the bandwidth over wifi great, but also it has the capability to handle more devices streaming at the same time whereas cheaper modems do not. which is why people use mesh all the time, however if you have a router capable of handling more devices streaming then you’re golden as well.

so here’s the recap

hope that helps everyone