Just updated the WCO V2 and V2 cams. All updated without issues. Will monitor and test

The updates went fine for my 8V2s and 3 PansV1. 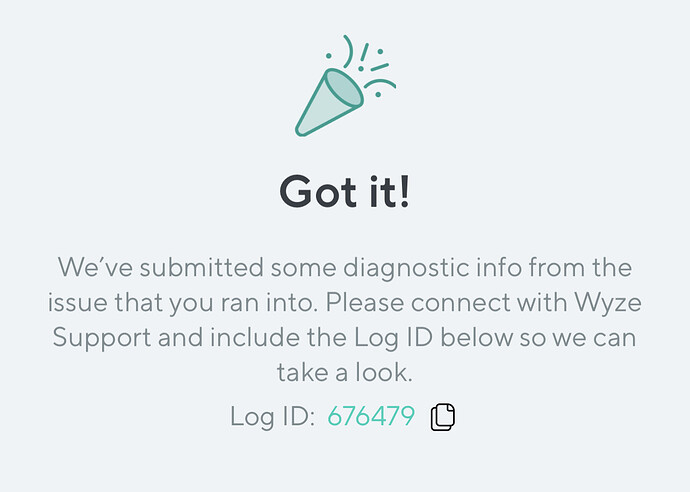 Edit: the choppy events clips created with the last beta (x.x.1273 ) seems to be solved. Now they are correctly tagged as person(CPL)

Edit 2: The photo of the zone detection is now loading correctly but still no landscape view since a long time. I don’t know if the landscape adjustment has been abandoned…

Issue when recording from Playback.

I updated several of my (non-critical, learned my lesson) v2’s. Like @gyzmo using a playback record still yields a “corrupted” recording and a black preview. Video recordings work fine if I take it off the SD card directly.

Luckily, this beta (SO FAR) hasn’t suffered from the previous “forget configuration” bug where the camera won’t remember wifi settings on restart/power-off.

Updated just fine on my V2 cam without any issues and I’ve not experienced any corrupted video playback like a few have reported above but I will keep an eye out for it.

Need to charge my V2 outdoor and test.

Updated both versions of WCO and v2 cam, no issues!

Oop, turns out it’s cuz the update failed… on all of them… trying again, could be my internet being dead

Thank you for the feedback. After investigating the playback recording issue, it is not related to the new firmware but a 2.34 iOS app bug. We will work on the app to fix it.

I’m happy to report that I’ve updated 10 of my v2’s and Pans to this firmware beta, from the problematic 1273 beta, all so far (24 hours in) have worked much better than 1273 beta, in that none have needed power unplugged/replugged (yet). Two of the 10 did not “take” the latest firmware update until after 2 or more attempts, but all 10 are now updated. With 1273 beta, 3 of the 10 would not stay operational more than a few hours before needing to be unplugged/replugged. Thanks Wyze for getting me past 1273, I’m once again a happy beta-tester.

Update:
Initiated an update last night for all cams after the failure, then went to bed. In the morning, all were updated and working except the v2 cam. That took another attempt then it worked.

Ok so I have not gotten any update on my Outdoor v2 cam. I noticed I was on a very old update and it wasn’t even listed on the site. It’s just never updated, so I manually flashed the latest one I can see which is 4.48.4.124 which worked but I still can not see this latest update, is there a possible reason why? I’m going to try repairing the device and see what happens and will update.

No luck with the repairing and double checked I’m set to be in the Beta but still not seeing the firmware update.

I am still seeing choppiness / dropped frames on my Pan V1s with CP detections (e.g., Person detected) as with the previous beta, although possibly to a lesser extent. The constant upload activity has stopped with this beta, which I am very thankful for.

One of my v2’s had a problem after the update process. It flashed properly but then experienced the “won’t remember wifi settings on restart/power-off” issue. Attempted to reestablish the parameters and camera did work for that duration, but when I powered it down to move it back to its mounting spot, it failed to remember wifi configurations. Reverted back to 4.9.8.1002 and working normally now. Hopefully the ones that did upgrade properly won’t exhibit this issue.

I’m still not seeing this update on my outdoor V2.

When do we expect this firmware update to be released?

If you’re talking about 4.9.9.1355, should already be available as I can see the BETA offering in my update list - if you’re asking about the stable version of this, I’ll have to defer that to the Wyze folks.