I have four Cam Outdoors and the base station that all have 32GB microSDHC UHS-I cards. When I check the Advanced settings for the cameras and base station, they all read the card (i.e. 0.01GB/29.7 GB). I have also Formatted them and get the same result. When I check the card on my PC, the only thing being saved on the cameras and the base station are thumbnail photos. They are not saving any video. When I try to enable “Back up to Base Station” under Event Recording on any of the cameras, the On/Off toggle is greyed out and if I select it, I get a message that says “No Micro SD card detected in Base Station”, even though I have one in and formatted it.

Do you have cam plus on those cameras? If you do the the videos will not be backed up to the base. I have 4 cams on cam plus lite with no issues. 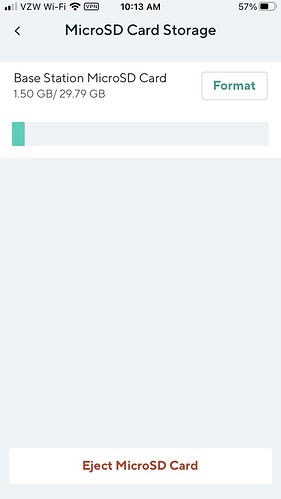 I am having the same problem. In settings for the Base Station - MicroSD Card Storage it says “No MicroSD card detected”. I put a Wyze 32 GB card in it and formatted it, but it is not showing up. Is there something I did wrong? Do I need to do something different?
Thanks.

The iOS app is strange. Have you tried to force close the app and open it back up to see if the SD shows up in the base ? I’ve done that before and it worked. Yesterday I charged a cam that was at 40%, the red light was solid after 1.5 hours which means it was done charging. I opened the app and it said 40% still, so I force closed the app, opened the app again and the cam showed 100%. Try it out, only takes a few seconds.

I had the same problem. force closing the app and starting it again worked for me very strange

I just installed my Outdoor Cam and have the 30 day Cam Plus license. I have a 32GB SD card in the camera but nothing in the base unit. Events are being captured but nothing is recording to the SD card. I formatted the card. I don’t get the option to Record to MicroSD Card that I have on my 2 other Cam 3 cameras. Also, I tried a 64GB card in the Outdoor Cam and it didn’t recognize it but it does work fine in the Cam 3 cameras.

1.Video Events are not recorded to the SD in the WCO like the V3.
2.Preiously if you did not have cam plus the 12 second videos were backed up to the base. I haven’t checked if it will back up to the base with cam plus lite but I know it will not back up to base with the full cam plus version.
3. The SD in the cam will only work as my post above and also for time lapse.
4. The cooldown period was added for the WCO to save the battery life I think, you could set it for 1 to 5 min between the ability to record events. I don’t use it, I have my 4 WCO on scheduled event recording with no cooldown which means they will record to the SD as long as motion continues up to the time I set which is 2 minutes per event.