Just received the Outdoor Cam and setup was easy. My issue is in the detection settings, mine is partially greened out and I can’t grab a corner to adjust size and area. It almost looks like a bad sensor or could it be a firmware issue that can be fixed with an update?

I wonder about the same thing. No way to change the detection zone. Looks like it is fixed. The upper third is outside the detection area and that is what I need to capture motion that is about 15 feet from the camera.

Same problem, no ability to adjust detection zone, camera also does not detect any motion. 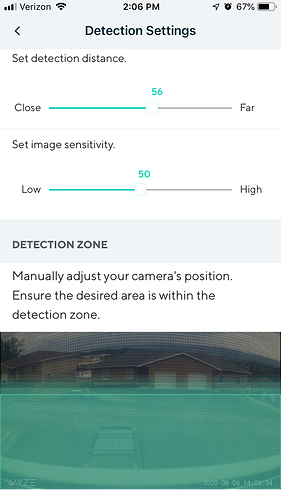 I have three outdoor cameras, the one that I have setup right above my front door does not detect when a person is at the door at all. It does not record or give me a notification. I am also perplexed by the fact that you can’t adjust the motion sensing area.

the green detection area is fixed, it even tells u to manually adjust the cams position right above it

Same problem. Green detection area is not adjustable. No motion detection on camera.

I can pinch and zoom, are you saying to zoom in to the area you want detected? That makes it almost impossible to not get areas you don’t want detected in a lot of cases.

I agree that setting the detection is not optimal, much different than the v2/pan. The only option is physically adjust the camera. I believe it’s because the PIR sensor is in that zone. So in my example, if I wanted better detection in front of those bushes, I’d need to adjust the cam as such. I was mainly wanting coverage for the back door of the garage.

It’s because of the PIR sensor. It’s easier to make detection zones for pixel-based detection.

I would hope that at some point this would be addressed by WYZE, until it is I would not be able to recommend this camera to anyone…

I am also experiencing the same issues (no adjustments, 2/3 detection area, intermittent motion detection, and the detection distance scale is very inaccurate) , and feel the current documentation and sales info is misleading. I am asking Wyze to acknowledge the issues, give us help and best practices, and road maps for fixes or updates. I want to learn to use this camera better but currently can’t recommend it to others at this time. -Kevin

where is share arrow? like what used to be on my other 3 cameras? I could send thru iMessage different vids…cant find it on screen. Sigh

Just got my Outdoor Cam today and I think expectations were very poorly set - PIR (Passive Infrared) why in the hell are they calling it MOTION? It should be HEAT and as you mentioned its mounted below the camera lens and that zone is NOT ADJUSTABLE like the other Cams (V2 and Pan) which use a completely different technology

I am also very disappointed with this new feature. Is almost impossible for me to get what I want inside that spot. Hopefully Wyze can come up with a better solution and release an update.

The lower 2/3rds restriction is due to hardware, the PIR sensors below the lens is aimed forward, slightly down from center (hence, the lower 2/3rds box.). The PIR is the initial wakeup for the camera, then there is a pixel based second layer of detection like the V2 and pan which is adjusted in settings. If motion passes both of those layers an event is recorded. Currently there is no adjusting the pixel based detection zone or box (which can be seen by enabling motion tagging and see the green boxes) from full screen beyond adjusting the sensitivity level in settings.

I just received my Wyze Cam Outdoor setup. I have it mounted at my front door looking straight down the sidewalk all the way to the street. People are walking all the way up the sidewalk and getting right at the door, actually ringing the doorbell, then close to 10 seconds later the recording starts. If it happens to be UPS or FedEx all you get is a shot of the person almost all the way back to the street. I do not see a way of adjusting this in the settings. I have slowly moved up the “Detection Distance” and “Image Sensitivity” to 100 and either slider bar does nothing as far as I can tell. Is anyone else seeing this?

Mine is the same and has been since I received it. Multiple updates have not fixed it. Mine it green on the top 2/3 of the screen.

The WCO detection zone is fixed due to hardware, it will remain the bottom 2/3 of the frame. Adjust the detection zone by physically reaiming the camera.