Is there already or does Wyze Cam plan on developing an app so that you can see the cams from a PC?

According to the Wyze Cam frequently asked questions the answer is no. Wyze Cam does not have a pc app, and do not have any plans to release one at this time.

25 posts were merged into an existing topic: View On PC/Browser

Check out a PC program called “Blue Stacks”. It runs android apps on PC’s. I’ve successfully used it to run the Wyze app on my PC laptop. And, you can run multiple instances of Blue Stacks to view more than one camera concurrently. Blue Stacks uses a lot of resources so your PC will need to be pretty robust. YMMV

Blue stacks didn’t work for me. Crashed out everytime I tried to open a view a camera, when you hit back button it took you out of the app altogether. You may be able to get it to work but it is a crapshoot and it has too much shadiness to be considered a true solution for the security conscious user. IMHO

Yep, your mileage may vary…I was able to run Blue Stacks on a top of the line Lenovo X1 Carbon laptop with Intel i7 processor and 8 gb of memory running Windows 7. With three instances running all resources were in use and the CPU was pegged. I’m sure it would crash any device with a less powerful processor or less memory.

mhsjfa - not the problem. I am running a machine with 64gb of ram on a xeon processor. It’s not a resource issue. It’s a software issue. And it goes beyond resource usage to the fact that this emulator is anything but reputable. It’s a workaround with support from less than scrupulous backers. It may work for you, but I can’t say that it is the right solution for anyone.

The problem faced by Wyze is that they are app developers who hired someone to put tech into someone else’s cam enclosure. It’s a frankencam. To develop a desktop app would require them to spend large sums to bring in professionals to do the job. Considering they already went to market with what could only be described as an early beta of the camera and the app, I doubt they have the funding to pull this off. Programming a desktop app is leaps and bounds over an android or ios app development. The web interface likely poses issues with the AWS cloud interface and is problematic in different ways.

My guess is that unless Wyze spends the time and overextends their pocketbooks, the company will fold or sell off to a larger company and all of our little cams will stop working over time.

perhaps the OS is an issue? running win7 here

appreciate your general comments on WyzeLabs development, thanks for your insight

yep, they’ve got a ways to go as none of my six v1 cams are reliable enough for true security use 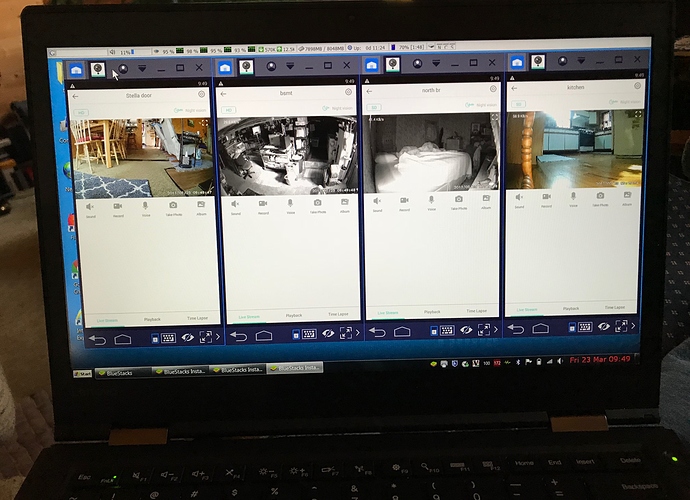 where is the app?

There is NO Wyze desktop app. Sure you can use an emulator, but I would advise against.

In the end, these are likely to cause more issues than solve problems. It would be nice to have a solid, stable, Wyze supported desktop app, and if you absolutely need it, you can use these workarounds, but they aren't quality solutions.
2 Likes
eqstuff May 4, 2018, 6:07am #18

Ditto! for everything you just said!

Copying and pasting your replies to multiple threads is bad form, not to mention that your opinion, expressed as fact isn’t necessarily true for everyone. The app is convenient and uncluttered. Multi-tabbed browsing combined with a multi-streamed camera viewer poses more issues that you are attributing to it. It’s not cut and dry.

The correct fact would be “the best solution for everyone is to have a customized solution for each user”, but that isn’t feasible now is it.

I wasn’t coming out in favor of one option or the other. I don’t think either is happening anytime soon, so what’s the point.

You are right that a browser may have more cross platform compatibility, but what about browser compatibility. HTML5 isn’t implemented the same across browsers. Some security measures are different and when dealing with streaming, trust me, there are big differences from browser to browser.

What I am trying to point out is that your “one size fits all” solution doesn’t exist. There is no “best for everyone”. What Wyze has to do is find the best for the most users with a viable solution for all users.

You can get it to work through TinyCam Pro.

Download TinyCam Pro (paid app, but cheap @ $3.99, since it supports multiple cameras) on an android device. Add your Wyze cameras to the app. Then turn on the WebServer feature, and click on the link that appears at the bottom, which then takes you to a screen where you set your own username and password. You can then access all your Wyze cameras through a password protected URL.

The idea was to do this on Windows and not Android hence the subject title.

that’s what I"m talking about. Once you turn on the web server, you can access the cameras from any browser. PC or MAC…doesn’t matter

Here’s their demo account, so you can see what I mean.