My ISP recently sent me notification showing excessive use of internet - which is surprising based on my family’s internet usage habit.

After looking into the usage (through Unifi Dream Machine), it shows Wyze camera (matched by MAC address) has uploaded 65GB+ in the past week - then I realized that was because I have been watching our new puppy live stream through Amazon Alexa throughout the day (kept it video stream on throughout the day).

Contacted Wyze support, and was directed here to post a thread and work with community to upvote for request.

[Mod Note]: Post was moved to this category (for forum troubleshooting/help) as your request is satisfied by existing functionality. Wyze cams currently live stream via yor local WiFi when your viewing device is connected to the same LAN as your cams.

I’m not sure what you are asking for, Local streaming on the same LAN has been the case since day one. There could be an issue with the Alexa device that is forcing traffic out to the internet and back, but the Wyze cameras and Wyze app monitoring will stay local to your LAN when both the phone and camera are on the same LAN. Note that if the phone has WiFi turned off or disconnected, traffic will go out to the Internet.

That’s awesome to know. Perhaps it is the problem with how Alexa talks to Wyze?

If you have CamPlus it uploads a large amount of data to be analyzed by the AI and with no 5 minute cooldown period that data will add up.

And occasionally the programmers mess up and the particular combination of OS version, App version, phone etc. will just suck up all the data in the universe. Hopefully this gets corrected in Beta but since we don’t have every combination of the various parameters it could slip through.

@bryonhu - do you know of any EASY (1 touch) good Android app one can use to monitor data usage version going into settings etc. ?

@gemniii My data is not shown by an App rather it is shown in a web interface of my Cellular modem/router. I have one modem at my property dedicated to my cameras, security system and VOIP.

The security system (non-Wyze) uses very little data, and I rarely use the VOIP as it is linked to my smartphone which I take most my calls on. So 98% of that cell modems data is the Wyze cams.

I have another modem for my computers, tablets, TV’s and other non IOT devices that all my other data usage is on. Both modems are on a true unlimited plan so I have no data caps.

As far as an android app that could calculate data on my networks there may be one for the Orbi Mesh system but I don’t use that to check data and get that info directly from the cell modems.

Below is a screenshot of the web interface of cell modem I get the data from: 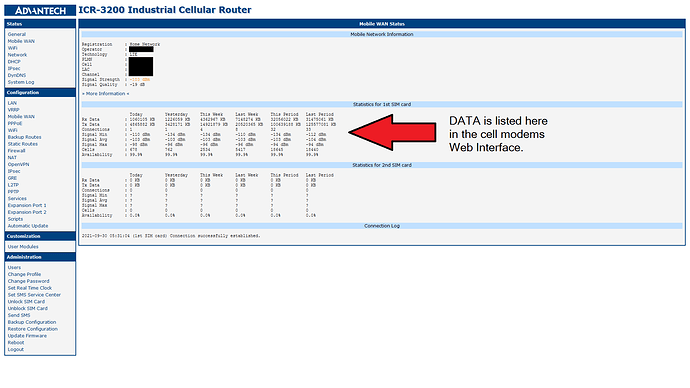 Because of what my router is, I can measure in substantial detail what device is communicating with what. I’ll set up a few packet counter rules…