Wiring for a Wyze Switch (two red, one black)

I bought several Wyze switches, and one of the locations I want to install one has strange wiring. It’s an old dual switch, but only the top switch is wired. And there is no ground.

There is a red and a black wire to the switch and another red wire that is capped inside the gang box. (See image below.) I tried to use the capped red wire as my neutral, but this didn’t work. I haven’t tested the wire for power (something I’m going to try tomorrow), but assuming all three lines are hot, can this be wired for a Wyze switch? 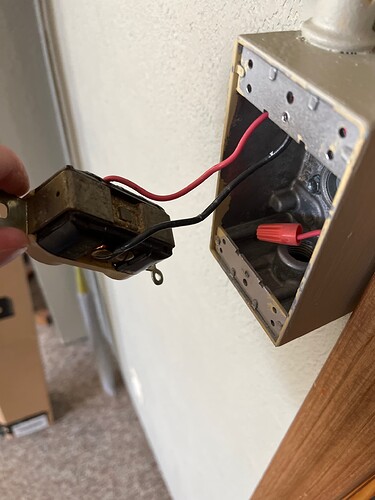 Welcome to the forum @treyreid.

I am not an electrician, but a DYI person and have never ran into that type of configuration,
But based on what I know about Smart Switches and to the best of my knowledge.

Someone may correct me, but, I do not believe you will be able to use a smart switch there.

While I don’t know where the capped red wire goes to or comes from, the switch connection itself is definitely a single pole configuration (no neutral) regardless of the color of the wires, and therefore wouldn’t work with the Wyze switch.

What does that switch control?

Sounds like a three-way switch. Two reds would most likely be travellers, from what I’ve read. Also not an electrician.

By “dual”, I believe they mean duplex, like this one:
https://www.amazon.com/Leviton-5224-2W-Single-Pole-Combination-Grounding/dp/B0033PSGAU

My home had a couple of those, one near each door (one switch for the outside light, one for the inside light or outlet).

The red was likely the load line for the second switch, and was disconnected due to that load no longer being in use or no longer needing to be switched (similar to what I did with one of my duplex switches).

These switches normally have a break off metal tab connecting the line terminals, so only a single wire could provide power to both switches or they could be used for independent circuits.

Ah, yes. So, black would be line, red would be two load lines. From the photo no neutral. Box might provide ground.

I would agree that the black is most likely hot and the two reds were to the switched leads. The OP said that the top switch was not used. That was most likely what the second red wire was.

As for the conduit and box being able to provide a ground, it could well be. It appears to be a metal box and conduit. No guarantee without measuring it. Ground and Neutral are NOT the same, and are not interchangable. Trying to use the box ground as a neutral would absolutely violate electrical code, and if this is downstream of a GFCI, it would very likely trip the GFCI. Don’t do it. Pull a real neutral through the conduit.

In full disclosure, I am not an electrician, but I do a lot of electrical work as part of my employment working under the direction of a licensed electrician.

Lots of good info here. Lots of “I’m not an electrician” disclosures.

Same here - a DIY’er who doesn’t do my own electric. My disclosure is that someone more knowledgeable about electric will be helping me with the install this week.

It’s most definitely not a three way switch. Would make sense if the capped red wire was for the second switch. I’ll check it out this week.

As far as pulling a neutral through @K6CCC… the wiring is in conduit and easily accessible through a dropped ceiling. Running a neutral shouldn’t be difficult. As someone who’s never done it… does it need to run all the way to the breaker? I’m assuming it does. If so, it might be problematic. If I can tie in to a any neutral, even one from a different breaker, that might be possible.

This is in my office at work (old building.) The good news is, I have all new wiring at my house with updated line, load, and neutrals at every switch. My home install will be super easy.

The plot thickens! (Or is clarified…)

Below is a picture of the wires at the top of the conduit in a junction box. It looks like the original wires coming in are Black, white, and green. The black is connected to the black wire in the switch. The green and white are connected to the two red wires. So the capped wire must be the green, neutral wire. (I didn’t have my voltmeter to test it, but it makes sense.) So I should be able to use the black and red for line and load. And I’ll need to run a third wire for neutral. I’ll let my buddy who knows electric better do it. 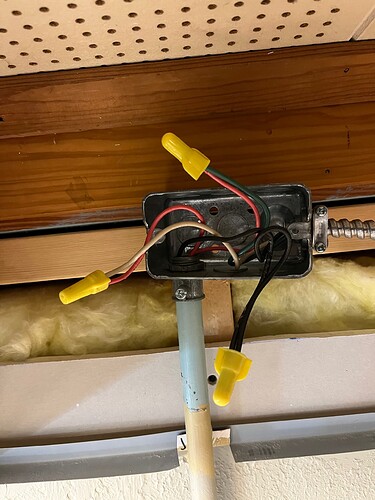 So the capped wire must be the green, neutral wire.

Green is the normal color code for ground, white for neutral, black for line: 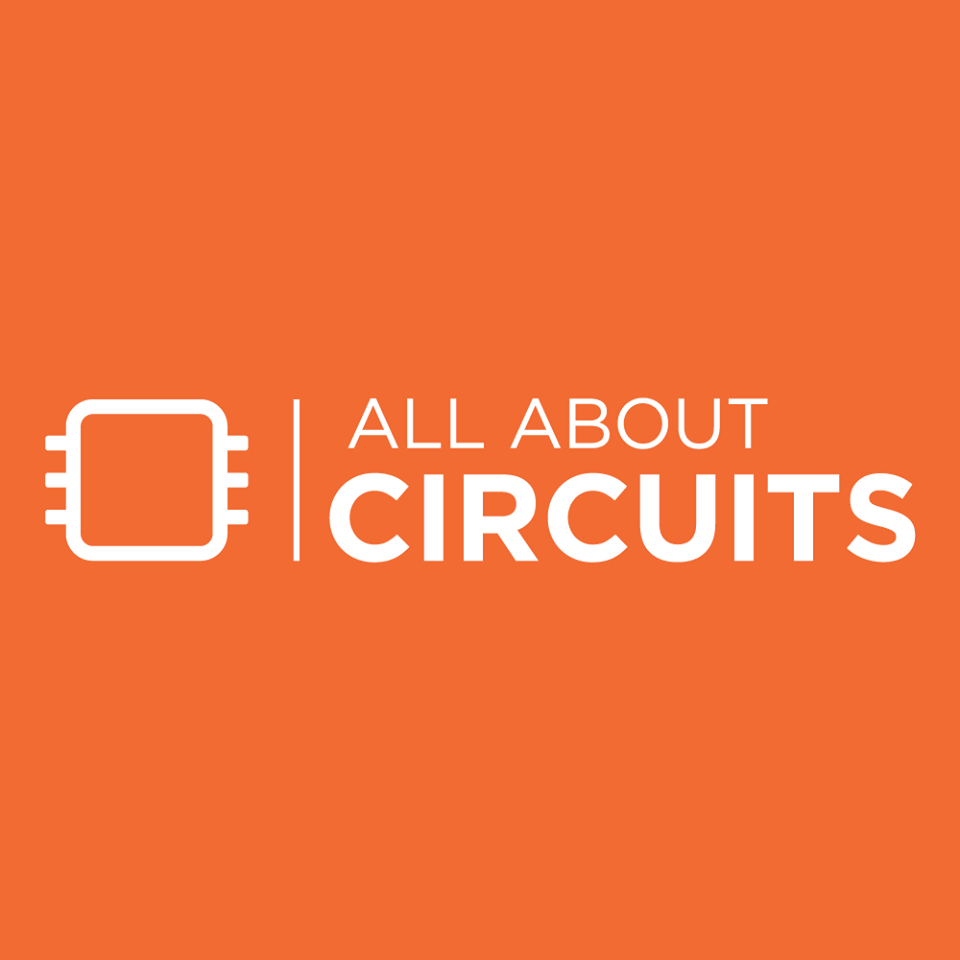 Yep. Mistyped. Meant the green is ground, not neutral. I’ll have to run a neutral down through the conduit. Shouldn’t be too difficult.

It looks like they used the BX cable (the stuff coming in from the right) as wiring intended to run to a switch with TOTAL disregard to color codes. That is NOT Hot, Neutral, and Ground. It is Hot (most likely on Black), and green and white as the two switched hots. There is no neutral in that box, and the only ground is via the metal shell of the BX.

The next step would be to go to the other end of that BX cable and see what is there. Unfortunately there is no easy way to get neutral there. Most likely you will find a box that really does have hot, neutral, and maybe ground coming in from a power source, and the two switched hots coming from the (gag) green and white wires in the BX and going out to whatever those switches were powering along with neutral and maybe ground.

What I would do if it were my house is replace the BX with conduit (likely flex because it would be easier to retrofit). In that conduit, I would bring hot (black), Neutral (white), Ground (Green), and the two switched hots (some other colors - yellow and orange for example). Those would just pass through the box shown above the ceiling to get to the box where the switch is located.

If you are not confident in doing that (or don’t understand what I explained), hire an electrician to fix that disaster.

Yes, crappy that they didn’t keep the color code. It’s not my house, it’s my office. However, I have the liberty to rewire as needed. When I’m back in the office tomorrow, I’m testing the capped red (which is coming from the green) to see if it’s hot. I THINK it’s a ground. That leaves the black as the hot (line) and the other red (coming from the white) as a the load.

It will actually be very easy to run a neutral there. I’m going to run it from the opposite side of the lights that are mounted in a dropped ceiling. Lots of room to access. And since it’s conduit to the switch, I can fish it to the box easily.

But yes, whoever wired it did a crappy job.

I’m testing the capped red (which is coming from the green) to see if it’s hot. I THINK it’s a ground.

Almost certainly it is NOT ground. It intended as the switched hot from the second (unused) switch. It should be going to whatever load was supposed to be controlled by that unused switch (if there is anything).

I’m pretty sure can make a good guess as to how it is wired (including the part in whatever box is on the other end of that BX). I can make a drawing and post it if you would like.

A drawing would be fantastic. I did talk to a contractor today and he confirmed that running a wire from the neutral side of my overhead lights (controlled by my current switch) would work as a neutral for my smart switch. Again, thankfully between conduit and a drop ceiling, it can easily be done. He also confirmed that the metal box and metal conduit served as a ground and that a ground wire was not needed to be attached. Phew.

My plan is to run the neutral wire this week and leave the capped red wire capped. I wish I knew where it led to, but it goes into a wall before I can trace it to it’s final destination.

You (@K6CCC) especially have been very helpful getting this switch installed in my work office. Thanks so much. In better news, my home was completely rewired during a major renovation about eight years ago and every switch has neutrals already. I installed two Wyze switches yesterday in about 30 minutes time combined. Looking forward to switching more over the next few months.

If it were my house, I would replace the BX cable with a piece of conduit (flex most likely) and pull five wires through it and the conduit down to the switchbox as follows: Black for hot, White for neutral, Green for ground (I don’t generally trust a flex conduit as a ground conductor), and two other colors for the two switched hots (maybe yellow or orange - which I keep in stock). 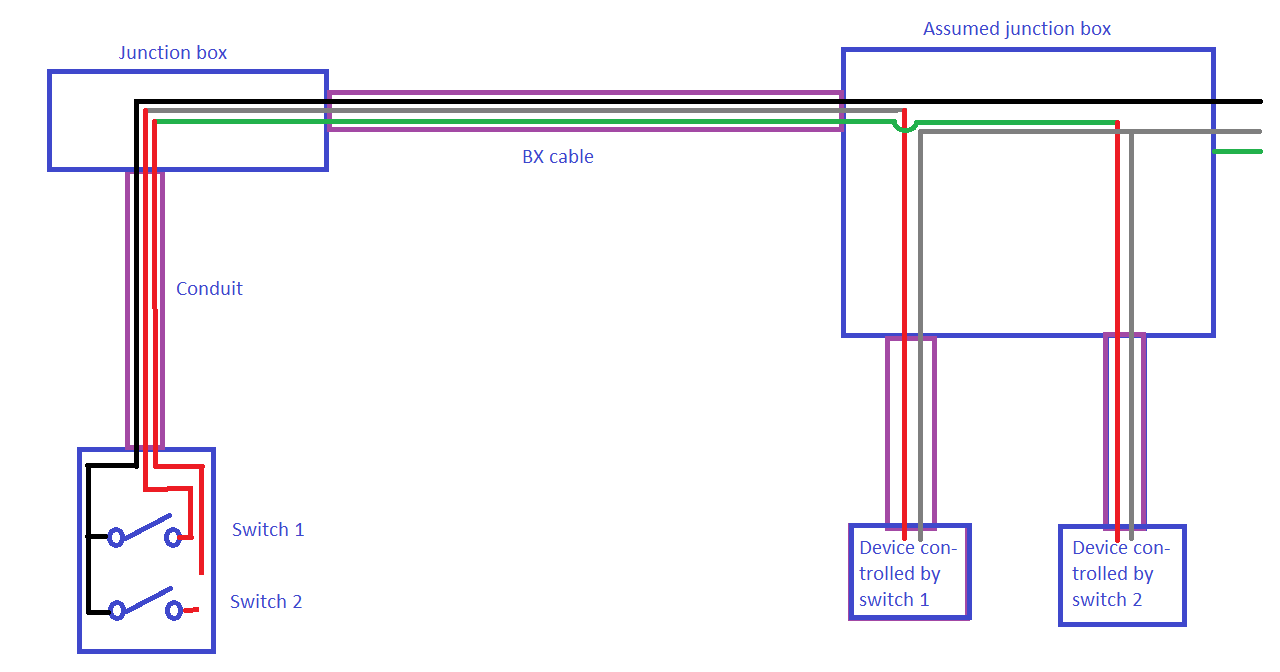 Last update is a successful update!

I confirmed that the green to red wire was the capped wire in the switch box. So I disconnected the red to green and capped the green wire alone. Then I connected the now disconnected red to a white wire in a short piece of Romex and was able to tie into the neutral wire coming out of the lights. (Thankful it was a very short distance and that I have drop ceilings!) Now that capped red wire in the switch box is a neutral wire. I labeled everything I did for whoever needs to do future work.

Viola! Working smart switch. Thanks for all your help! 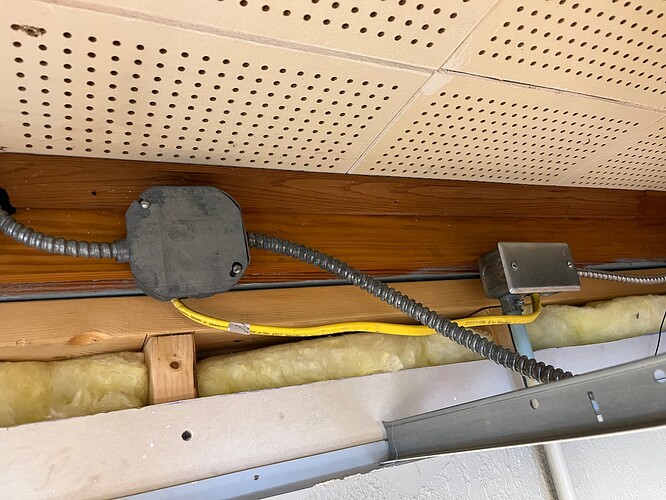 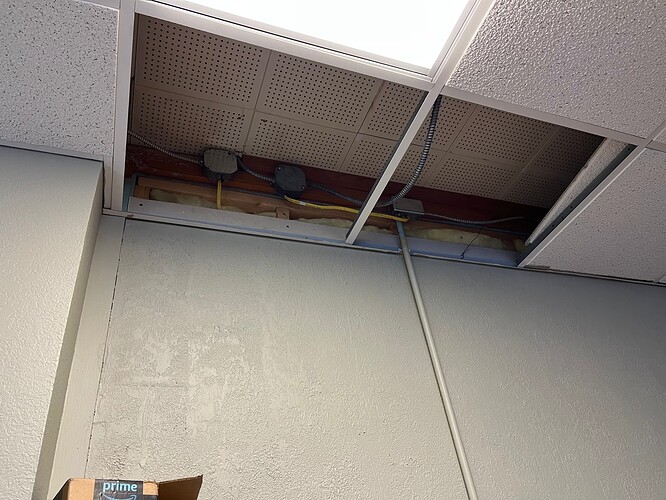 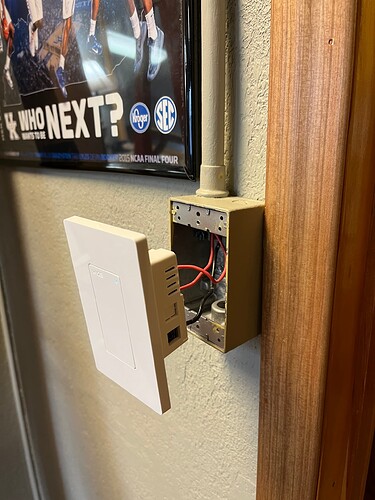 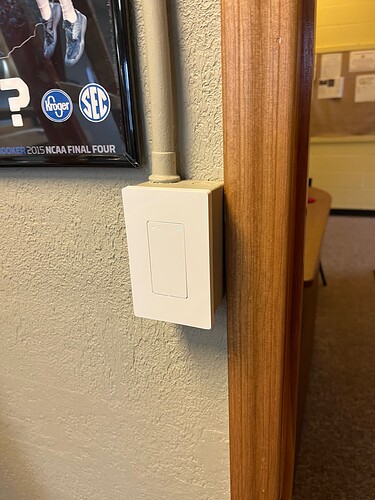 Please, please, please since it’s conduit down the wall so this is easy - pull in a piece of white wire and use that wire for the neutral. Don’t perpetuate the incorrect use of a red wire as neutral. Your option to pull out the extra (unused) piece of red wire between the switch box and the upper box. Here is the drawing I made to show what I would do if this were my house (completed prior to your post above). Short version is I would replace the BX with conduit and properly wire it. Added a few notations to the drawing as well. 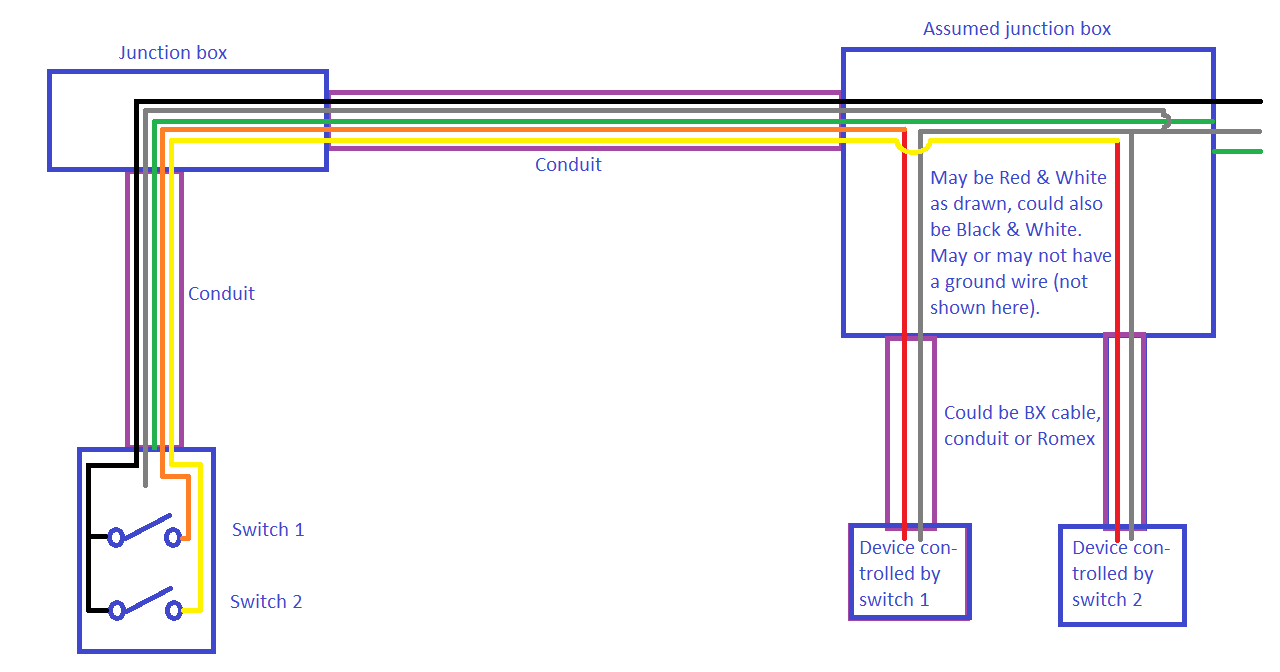 It’s not a bad idea to swap out the red for a white in the conduit. Replacing the BX with conduit is not feasible since it disappears into a wall. I have no ideal the path to get to the breaker box. I also have no idea if the second switch ever controlled anything at all. If it ever did, it hasn’t worked in close to 20 years.

For right now, I am pleased that the circuit is complete. Next time I’m at a hardware store, I’ll buy about 6 feet of white 12 gauge wire to run into the conduit and to the switch.