Will Wyze cams connect to a 4G hotspot?

My parents have Directv with AT&T internet service which is basically a 4G hotspot (modem with its own cell phone number). I bought them a doorbell cam and outdoor cam because they are both elderly and I want them to be safe. My mother is in a wheelchair now and my father has hip/back problems. They live in a nice area and are very vulnerable to “mischief makers”.
I have been trying to set up their cams for nearly 2 months now and I cannot get them to connect. I have separated their 5GHz and 2.4GHz bands so I know I’m connecting to the right band. I’ll pull up the WiFi set up on my phone while I’m trying to connect using my dad’s phone and I see the devices show up but I keep getting the message that the QR code is incorrect on the doorbell and it failed to sync on the outdoor cam.
I contacted AT&T internet support and they said I had to do port forwarding. Well, on my parents modem everything works off the same port. So I had a friend who knows something about IT come look at it and he said he didn’t think it would connect on a 4G hotspot.
Can anyone tell me if it’s possible and what I need to do?

Sure it’s possible, you’re doing the right things, your friend is wrong, and AT&T is lying to you. No port forwarding should be required - your app and the Wyze cameras are making outbound connections.

All they need is 2.4 GHz WiFi and Internet. Just make sure your phone is on that WiFi during setup.

I’ll try that, thanks.

Some cellular hotspots limit the number of connected devices is it possible that the maximum number of devices are connected?

Older AT&T hotspots allowed 10 devices, some of the newer ones allow up to 40
Check hotspot and see if it is maxed out.

I run 24 Wyze cams on 4G LTE with no issues, I am using a cellular router that connects to 3 wireless access points to cover 4 Acres (Basically a Hotspot on steroids)

Make sure the cameras are within the range of the hospots WiFi signal too.

A word of warning on the portable hotspots, a lot of people leave them plugged in to charger all the time to keep them on. This can be very dangerous as the battery will get overcharged, I have seen the batteries swell bad enough to pop the cover off back of hotspot. In the user manuals they usually state maximum charge times allowed. Putting a lamp timer set up to turn on and off charger is a work around.

When I log in to their WiFi setup I only see their phones and my phone. They just got this modem in April (?). My dad is developing a subdivision and they were the first to build in this phase and Comcast hadn’t run their lines yet and had not given them a timeframe as to when they would so my parents signed up with Directv/AT&T. Wouldn’t you know…two weeks after they moved in Comcast ran the lines.

I’ve been going round and round with them ever since.

They have a Ring Spotlight Cam as well and that won’t connect either. That was working perfectly on Comcast in their other house (which is about 100 yds away).

I didn’t know that about the charger. Thanks for the info. I’ll make sure to pick up a timer.

What is the model of the AT&T hotspot?

If they’re on the plan I just looked at I’d switch to Comcast as soon as possible (sometimes competitors will eat early termination fees). Limited to 1 GB per month? One streaming movie and they could be over.

But I still don’t know why you can’t get the cameras on. If there is a distinct SSID for the 2.4 GHz band, and your phone is on it, it should work.

I’ll have to get the model number and security tomorrow, I’m not at their house right now. I know it has 2.4 & 5 GHz because I set their guest WiFi to be the 2.4 and their main WiFi to be the 5. When I try to connect the phone is on 2.4 and I’m trying to connect to the 2.4.

I’m trying to convince my dad to switch and just eat the early termination fees. They’ve had nothing but trouble with this stupid thing since they got it and the Directv is just as bad. Unless you pay for all the extra channels you can’t watch squat.

How many guest users are allowed?
This may be the issue.

I’ll have to check tomorrow. I have to go stay with my mother in the morning so I’ll have time to work on it.

The model of the modem is an IFW-40. I changed the security to include both WPA-PSK/WPA-PSK2. It allows up to 20 devices on each band and currently I am the only one using the 2.4GHz.

I tried to connect the doorbell cam once again (turned cell data off) and nothing. I still get the “QR code is incorrect”.

I think I have my dad convinced to dump this satellite/4g internet and go with Comcast. I’m so over this.

Maybe try setting up 5 GHz as Guest and 2.4 GHz as Main WiFi, maybe something in Guest mode is the problem.

Also have you tried other devices than your phone to setup?
Maybe QR code is not fully displayed on your phone and you may need to scroll to show entire code.

I’ll have to try tomorrow. I just got home from their house.

What other device can you use to set it up other than a phone? I have a Surface Pro, but I thought you had to use their app for setup. (Maybe I’m just stupid. Lol)

Some smartphones do not display the entire QR code as some have mentioned in other posts, sometimes just scrolling the QR image brings it into view.

Your parents phones you said were connected so I assumed they have smartphones.
Maybe try using one of their phones, just be sure the phone is on 2.4GHz when using the Wyze App to connect camera. If you have a V3 too I would try that before trying doorbell cam.

I looked up the IFW-40 and this unit IS DESIGNED to be plugged in ALL the time, unlike the basic hotspots. This unit can supply a telephone line and also has an Ethernet port so it is more like a cellular modem/router than a hotspot.

If you have or can borrow a WAP (wireless access point) and plug it into the Ethernet port on IFW-40 that could be used for WiFi signal to cameras to see if it is something to do with the IFW-40 WiFi.
If it works on a separate WAP that would show the issue to be with the IFW-40’s WiFi signal.

You would have to setup the WAP with WiFi name (BSSID) and Password, etc… but maybe your IT friend could do that and possibly have one to loan you for a test. 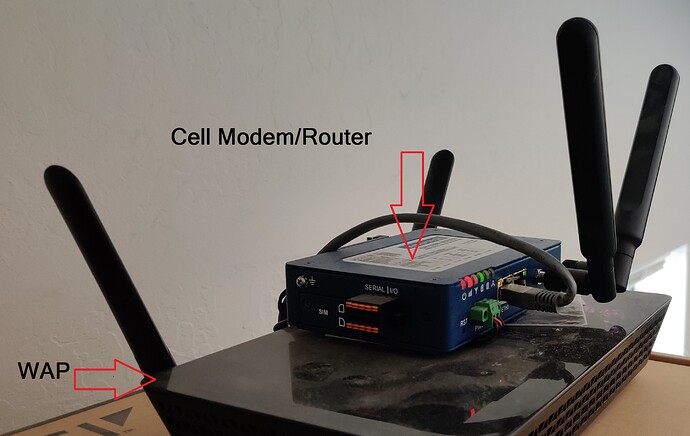 I have the newest iPhone and largest screen. My Surface Pro is a touchscreen tablet/laptop computer as well. I have an iPad, but I don’t even know where it is right now. Lol. I’ve never had any issues setting up my Wyze products using my phone (except ever since I tried to update the firmware on my outdoor cam it won’t connect to the base anymore which seems to be a common issue).

I have 3 Google nest WiFi routers/hubs. I can use one of them as a wireless access point.

If using the Google nest WiFi make sure it is not set to be a router, it needs to be in WAP mode only.

Any luck with external WAP connected to IFW-40?