What is showing swirling on night vision?

Not sure whats going on, but all my night videos are showing this. Captured on the outdoor cam. 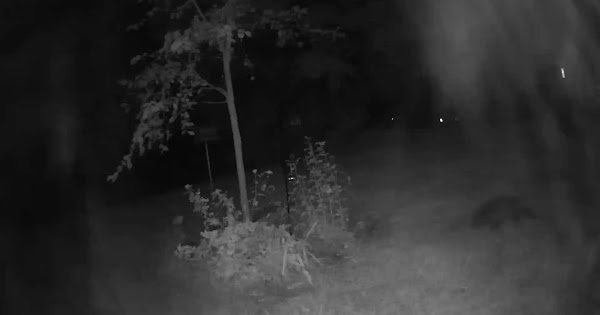 Well I did notice the Racoon

But on all cameras?, it’s atmospheric? I’ve seen a lot on cameras but nothing like this except Cigar Bar Footage.

I only have one outdoor cam, this is mounted on an apple tree near the tree line. Nothing from the house is around.

You have me stumped. Congrats.

I’m sure there’s an answer from the many here.

Uhhh I’ve been testing the camera since December and I’ve never seen anything like this personally or reported by anyone else.

It doesn’t seem to happen during live view, just events.

Well i have some from when it was indoors, and those have no issues. It seems like only events when the camera was outdoors, and in night vision. All those are like this.

I dunno that’s very wierd. I would guess maybe fog, dust storm (but I don’t see much wind on plants), smoke? I’d probably bring it inside and trigger it in a pitch black room to see if the same thing happens.

What’s the sound in the background? It sounds like a freight train. Do you have tracks nearby? If so it may be the exhaust from the train.

Yes I do have a train track that goes by. Here is another video with some noise, but it doesn’t sound like a train. But I guess it could be. I’ll check the live feed next time I hear a train. They idle here a lot as we live on a junction.

Dang, that’s some good detective work. I didn’t even think of using headphones…

It’s gotta be the train exhaust? Dust? The raccoon might be fleeing the train!.

Thanks, I thought the sound may have been a train since I have a track that goes by my house. The tracks are about 1500 feet away and it’s very loud especially since the train goes through the town at 1am.

Some kind of dust or spores from the apple tree? If you go to the wco, is there any kind of residue or dust on top or anywhere on the cam? Does your camera have a heating problem? Looks like it could be a smoke or something too.

Edit/ replied to @SuperStorm but the above is for the group.

Edit2/ looks more gritty than smoke. You can almost see the particulates as they swirl around. When I Google apple tree dust, it shows the plethora of "powdery mildew"results. Could that be a thing?

Congratulations for get an event capture! Or did you just record a live capture?

That is one cool effect … demon raccoon? LOL

Looks like the lawn sprinkler system activated and spooked the raccoon

Looks like you are using it outside? is this a outdoor camera? if not are you using something to cover the camera like a plastic wrap or something? kind of looks to me like it could be the IR reflecting back off of a clear plastic wrap? just a thought.

I’m with RightlyWitnessed
I had an identical effect on mine until I realized the camera was pointing at the door that had an exhaust pipe for the furnace right above it. Every time the furnace came on in the winter I would get constant movement alerts

The sound is very loud. Any chance the camera is near your dryer vent? That noise could be a clothes dryer running, and the vent would explain the swirling. Or anything else that runs in your house at night, and has a vent (to the outside heat, cooling, etc.).

I’d say fog, I get that on mine. Or poltergeist.