What do you think of A Space Heater

These days HW heaters can be in the attic, or in the basement shop and not always where you see them. A leak can be an expensive proposition not covered by insurance. Water wastage might be an issue too. A couple years ago the top blew off my guest room toilet fill valve the day I left for a month long vacation. Many thousand gallons went down the sewer. Fortunately my small town utility split the bill with me. Granted, a leak detector woul not have helped, but a reminder things happen.

A number of our valves are aged and it takes a certain amount of reefing in either direction to get them not to drip.

LOL! Replacing the leaky-finicky shutoff valve for a toilet is on my honey-do list for today. As soon as I get off this forum.

Then I’ll be able to do as @Customer wrote… turn the valves off when leaving for a while.

I’ve had 3 water disasters over the past 40 years… once my cat dragged newspapers and artificial flowers into the sink and raised the lever to play in his own swimming pool. He didn’t turn the water off and I came home 3 days later. Water pressure regulator sprung a leak in the dead of night in one house the week after I bought it. Neighbor redirected his gutter flow into my yard and flooded my basement while I was gone for week.

I’m not saying I’m paranoid, but after those stories from @Seapup , @layneteague and @Hemi I just went and did a visual plumbing inspection in the basement…

While we’re on the subject did you know Wyze got FCC approval for a “Neos Leak Sensor” in June? 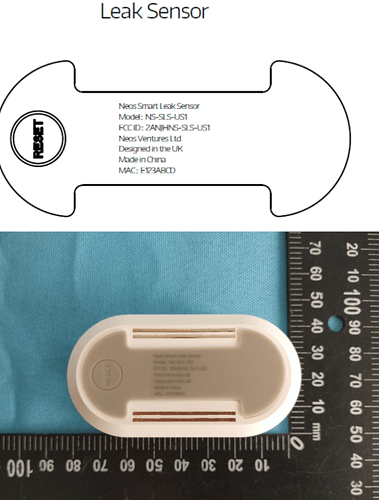 A full space heater, no. But what about pairing a temperature sensor with a Wyze plug? Then someone who already owns a space heater can plug it in to the Wyze plug and leave it on. When the temperature sensor gets to a set-point it can trigger the Wyze plug to go on. Rules could also be set up that restrict the times of the day that it would work. Depending on the amps, this kind of setup could be used in other configurations besides with heaters such as fans or older air conditioners.

Thanks, I guess I can see the point of such leak detectors. At Wyze prices, I’d probably get a couple of those sensors too,

For most of the seriously catastrophic examples, it seems like you’d know about it close to immediately without a sensor if you were home (ie: the noise of the ceiling collapsing), and most insurances would actually cover the rare serious issue anyway… but the sensors would be more useful while you were away, and the emotional peace of mind can be priceless. Regardless of the statistical risk, nothing drives spending like fear (Coronavirus toilet-paper shortage comes to mind). So it would be a smart move for Wyze regardless. It would certainly be great if it could be tied to a shutoff valve connected to the main water line. Even if leaks rarely ever happened, it’s still something very highly requested, indicating it would be popular and may even bring in new customers to the wider ecosystem.

I’d be more likely to use them for other purposes than leaks though: maybe be able to check logs to see if my kids remembered to take a bath/shower like they were supposed to, check on garden watering frequency, be reminded to refill the pet water when it gets low (or see if it got refilled to a certain level by the kid whose chore it was), and those are just off the top of my head.

I haven’t found a leak detector that works with Alexa either. Lots of stand alone software units out there. I have a sump pump and a way to know it was running would be nice. I ruled out automatic water shut off due to many problems with where my shut off is and no power near it. I have my neighbors ready to shut water off at the meter plus we don’t have gas to worry about.

Those graphics look conspicuously more like a Wyze V2 (square) than they do Neos’ own “security” cam (cylindrical): 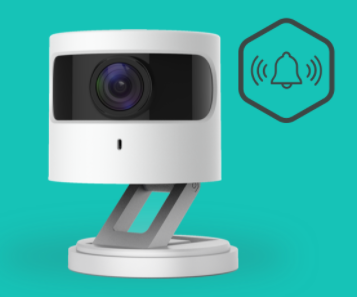 Makes me think that Neos just put a Xiaomi cam inside a cylindrical package…and that Wyze chose the Neos Leak Sensor because it’s predisposed to easily work with the V2 cams already.

(I just saw some reviews that showed some Neos Cams were identical to V2’s, at least in the past)

Seems like a decent sensor though, can detect a single drop, tell what the temperature and humidity are, 18 mo battery life, sound alarm, etc. For 3 sensors + a bridge they were charging £44.99, so about $53. I’d expect equivalent Wyze sensors would still be close to $5 each. I love that they can do a lot more than just leaks (temp/humidity too). Since it seems Wyze has already filed approval for these, I’m excited they appear to be coming up soon. 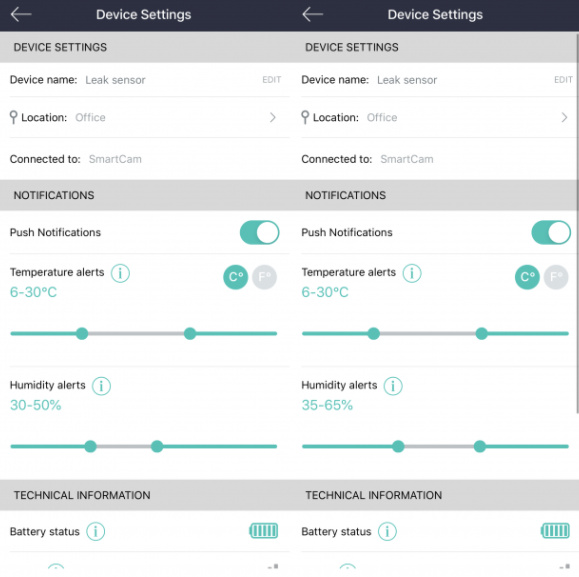 Based on some devices they are working on (these temp/leak sensors, and the thermostat), I can see why they are thinking about their own heaters (not that I think they should do it). I mean, if you get the Wyze thermostat they’ve been working on: 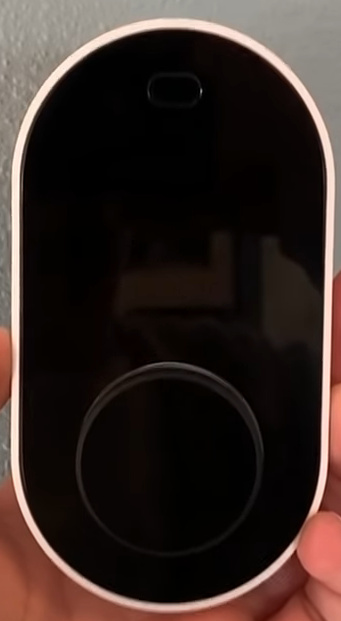 and pair that with several of these Neos temp/humidity/leak sensors for each room, then it would track individual areas of the house and equalize the temp. (for example, my basement is always about 15 degrees cooler than the main floor despite having “central air” and us doing things like closing nearly all the vents on one floor, etc. Joys of an older house…).

It is exciting to see they’ve actually filed for these sensors! It didn’t take long to release WCO after filing, so maybe these are coming out soon too!

, it seems like you’d know about it close to immediately without a sensor if you were home (ie: the noise of the ceiling collapsing), and most insurances would actually cover the rare serious issue anyway…

Ah sweet innocence. A few million of us “Superstorm” Sandy victims laugh and beg to differ.

Only FEMA and a local charity reimbursed a dime, and half my house disappeared. (I think the FEMA payment was about $1,500.)

BUMMER! Guess I need to stop believing what I see on the news…

Hope you still ended up with a nice new house!

A few million of us “Superstorm” Sandy victims laugh and beg to differ.

That sucks…sincerely…but…how would a leak sensor have changed anything in that case? It’s not like the storm itself was a surprise… Again, it would’ve only told you what you already knew, right? The outcome would’ve been the same in that case I think…

Not sure what your point is. I mentioned it in response to your insurance supposition, not the leak sensor.

Ah, my misunderstanding about your insurance point, sorry. I thought you were also implying it related to the leak sensors somehow too. Thanks for clarifying.

Yeah, insurance is a complicated thing. I know they refuse to cover to a lot of major issues unless you specifically have some particular separate line item for that exact thing, and even then when it is widespread (huge natural disaster) they try everything to weasel out of it anyway. Not that I have all the answers or anything.

First my kids are now all grown now;
but I long ago put a GE Wind-up timer on the bathroom heatlamp/fan.
They come in several timer configurations, during use it keeps running till shut down
just crank it and wait till the clock runs down.
dck

HI:
I have been thinking of leak protection for some time as we suffered a ruptured washing machine hose during the night; water flooded the lower level and poured down the cellar stairs. This was 20 years ago. $30k damage. I am glad to see that WYZE is working on marketing a water sensor. Considering their integration of simple programing it would be simple to install a 120v valve to a WYZE plug and shut down the main water feed to the house. when triggered. Insurance companies take “Mitigation” in consideration if claims are made.
dck

I think that it’s and absolutely joke. What on earth is going on in your team members head. Look we need you guys to fix the problem with our existing cameras. I need to know , Can these cameras can be hacked by anyone?

When can I test one? It’s starting to get cold here in Oregon.