Has anybody else had a problem where the vacuum discovers additional area causing the map to expand, but their virtual walls do not hold location with the new scale of the map? Attached are cleaning records from 2 or 3 days apart. You’ll notice that when the vacuum was allowed to venture into Room 2, it caused the entire map to shift, thus causing the virtual walls to no longer block where the couch sits, but almost entirely blocked the hallway. It ended up getting itself stuck under the couch last night because of this (ended up having to drag it out from under there last night).

Additionally, see all of that “extra” space it discovered in the areas it had already been cleaning, but didn’t actually clean between the two images? None of that area actually exists, it’s like fabricating whole entire new area that’s hidden behind walls out of thin air on its map.

Is this an error being experienced by anyone else? Seems like a pretty easy fix if it’s a widespread app bug or error? I’m currently running the 1.6.75 firmware on the Vacuum and 2.16.23 on my Pixel 5.

@JonathanF or @WyzeGwendolyn maybe you could help get some eyes on this? 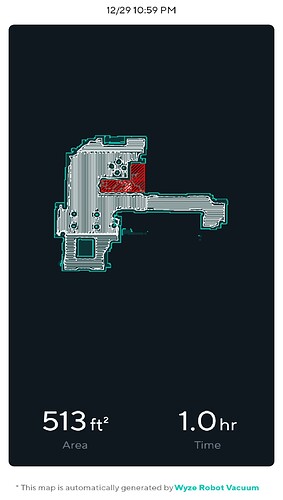 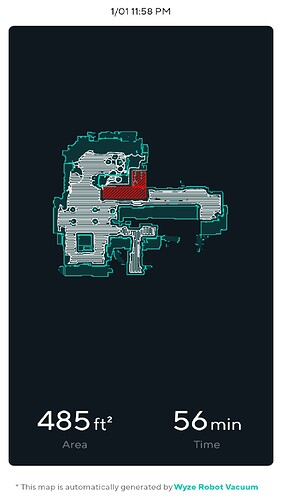 My vacuum definitely does not pay attention to virtual walls. It tried to go under my couch to get to the area I wanted it to clean. It spent 7 mins under there and it thought it finished cleaning and went back to the charger. Still needs some work on this aspect…

Mine avoids the areas, but when I opened up more of the main floor, it looks like it shifted everything on the map and the virtual walls didn’t stay in their position relative to the floorplan.

When I draw a virtual wall (image 1) and then exit the app or the virtual wall setup screen, in a few minutes, the wall automatically shifts size, shape, and location (image 2). Note: I’ve never run the bot using the automatically reshifted wall. I have been deleting it and trying again, but each time the app (beta v2.16.24) does the same thing.

I sent a log (91059) and hope they resolve the issue soon, as I need virtual walls in order for me to run this thing unsupervised.

I’ve experienced the same thing on it excepting a virtual wall and within a few seconds of resuming the wall disappeared. Tried putting it back in and the same thing happened again.

Click on the shaded box icon which you used to add the wall, then click on the existing Virtual Wall. There is a tiny “trash can” in the corner and clicking it will remove the wall. Make sure to click the “OK” button at the bottom to save your changes. 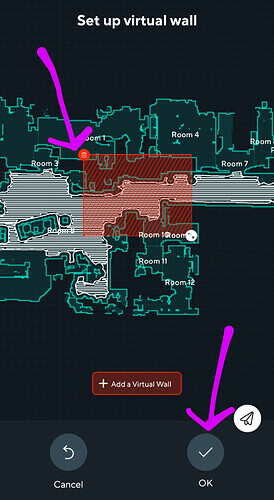 Update to my issue: I decided to try to run the bot with the virtual wall I made (and the app redesigned it for me). The bot follows the virtual wall the app self-generated instead of mine. Crossing fingers for a swift solution.

On my app (iOS) each virtual wall shows an arrow icon and a trashcan icon. Once placed, to move or delete any of the walls I need to again click on the add a virtual wall icon like I am going to add a wall. I can then choose any of the current walls and either resize one using its arrows icon, delete one using its trashcan icon, or move by grabbing the wall from the middle of the striped area and dragging it.

Thank you. My mistake was not first clicking on the virtual wall icon.

Has anyone else run into issues today?

I’ve had the Vacuum for 8 days now and it’s performed flawlessly, until today. When it went to run it’s scheduled clean tonight, it discarded the map and virtual walls and started it all over, but this time with the map tilted diagonally and in a different orientation, rendering the newly added rectangular virtual walls frustratingly inaccurate. Additionally, it’s now decided to make this horrific grinding noise, like 2 seconds of grinding, 2 seconds without, like in a pulse pattern. I checked the wheels and both brushes and don’t see anything that it would’ve picked up that could be causing it.

Map it had been using for the last 8 days:

Map it decided to redraw tonight and I had to add in the virtual walls again after I realized it got itself stuck under the couch:

Vacuum hasn’t been moved to a different floor, map wasn’t deleted, vacuum wasn’t picked up in the middle of cleaning or anything, etc.

I like the idea. You should post it in the Wishlist area if it hasn’t been already.

Update: The vacuum itself had a software update today. I knew it wouldn’t affect the app but tried to make a virtual wall again today and the app moved and resized it again.

Is there a way to rotate the wall?

I have found no way to rotate either the wall or the map itself.

Thanks I hope Wyze considers adding a way to rotate the walls to more effectively block an area.

I know of no way to rotate walls. If the whole house is at an angle the only way I found to fix it is to remap the house. Make sure that the charger is on a wall that is parallel to our perpendicular to an outside wall. Preferable not on an island but on the outside perimeter trace of the walls that will be vacuumed before starting the mapping. I found that if it is on an island and then takes off an hits furniture that is at an angle the map ended up on an angle.
The map editor appears be back and working again (I’m using the beta app version 2.16.53 on an android). The map editor allows you to cut and join rooms on angles.

Adding Virtual Wall Rotation would make this unit perfect. Having angled furniture or doorways are not that uncommon in a house.

o More of a wishlist for a future update

It would also solve a lot of problems when the vacuum maps a room at an angle for some weird reason.

Yes, my map does not identify rooms correctly and i want to create proper room names (either using virtual walls or some other way). I’ll post this in Wishlist as well.