Details or links to where this was reported please. I would like to test on mine.

What OS? iOS or Android?

Did you also just recently update the iOS app to the recent 2.37 Beta release that has changes to the audio codec for downloaded videos?

Please explain why I still have this problem despite being told it will/was fixed.

The fix is ONLY in firmware versions 4.36.10.xxxx and newer which have NOT been made permanently available for full public release due to unrelated issues that have limited the release.

The only current release version available is 4.36.10.3406 which was pushed only to those on the 4.36.10.2864 release which had to be halted due to unrelated issues. It is being tested for stability and bugs now for those who updated to it. I suspect that it will be released for all V3 cams if it proves out as a stable release. If it doesn’t, I would expect another Beta round.

4.36.10.3406 is available for download and SD Card Manual Flash Update if you would like to join the testing effort. You can provide your testing feedback in the following thread:

Check out the 2.38 app! Access the new email 2FA, holiday AI detection, dispatch button, and more! The Wyze Cam v3 4.36.10.3406 update fixes Event Video and connectivity bugs from the .2864 build and is only for affected cameras. Read our Release Notes:

Thanks for your info. Based on what you stated, I realized the camera I was checking didn’t have the recent update. However, upon checking other cameras that did receive the update, they aren’t working properly either. They show the correct storage amounts but there is no actual data to be found. I’ve added some screenshots for reference. 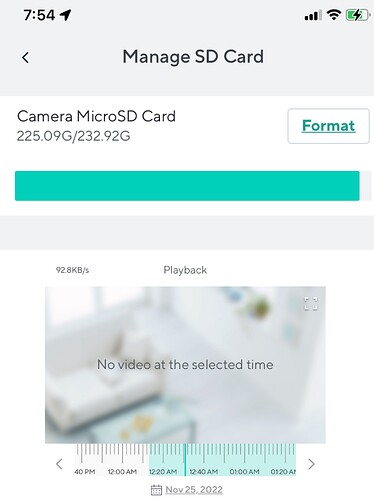 That very well may be the little blue bar fibbing to you because it didn’t update.

I see that the date you have selected is November 25.

I am also using 256GB cards and have no video prior to November 26th @ 10pm. That is the limit of the card when recording continuous in full HD. It will also never use the full capacity so that there is room for other functions that may need some space.

If you are recording in HD, your video may start a day or two later than what you have selected.

The real test is to pull the card, read it on a card reader, and see what the latest date folder, hour folder, and minute MP4 is on the card. That will tell you specifically how much time your card will hold when recording continuous.

Is this a common issue?

I’m realizing that “the little blue bar” is a bunch of crap.

Is this a common issue?

I have found it to be more suggestive than regulatory.

WOW!!! Rookie mistake with the email address. Because it was allowing me to respond right from my email, I had no clue it was being posted to the forum. I honestly thought we were having a one on one conversation.

Thanks for the heads up!

Regarding if this is a normal problem, I don’t know for sure. I would only “View Playback” when needed. In those specific cases, I either found the “thing” I was looking for or determined it was outside the saved timeframe.

At least for the next few weeks, I’ll be checking my cameras at random to see if this is a reoccurring issue.

So I saw a while back that this was fixed and so I put new 256GB memory cards in my Wyze V.3 cams but I didn’t realize the firmware was needing to be updated manually. I read the thread about new firmware version 4.36.10.3406 but it looks like that’s not being rolled out to everyone yet… only people with specific firmware. Is that still accurate? All my cams have firmware version 4.36.9.139 and I’d rather not have to update the firmware manually due to my cam’s locations. From what I understand is that there are bugs in the latest firmware so they haven’t rolled it out to everyone yet? If they work out those bugs, will it be offered through the app to everyone on version 4.36.9.139?

From what I understand is that there are bugs in the latest firmware so they haven’t rolled it out to everyone yet?

The functionality concerns in question don’t seem to be affecting everyone. Mine all work fine, for example. But there were a percentage of people reporting an issue, so Wyze has suspended the public OTA update to the newer firmware until they can make sure it’s resolved for everyone to have good functionality. There should be a new firmware update coming up that will hopefully be the solution.
In the meantime, like you saw, Wyze is allowing people to manually flash their V3’s to this firmware. If you do so, and you have any problems, you should probably just flash the firmware back to an earlier version again for now.