I have a Yi outdoor camera which is total 6 seconds instead of 12 seconds, BUT it includes two seconds pre-event video which is VERY VERY useful.

i set a very small detection zone, very close to camera, to avoid the fause alter triggered by passing car or tree moving, so with extra 2 seconds, i can watch people reaching my driveway

I would like to see that wyze camera also includes 2 seconds pre-event, i could not tell if it has 1 second or not right now. I can tell the motion sensor/contact triggered videos do not have 1 or 2 seconds pre-event recording (maybe there is but due to the delay among communication of sensor to camera)

Searched didn’t see but think was talked about. The video clip you get with a motion trigger a lol of times misses the beginning. The video clip starts with the person already in frame and you miss 1/2 of the important information and then you need to go out, back, go to playback, find the time, oh it’s nothing. Make the video clip begin (at least if you have continues recording) 3 or so seconds before the trigger

I’d like it if the event recording would have a 2 second lead time,
so it captures what led up to the trigger of the event.

I would like the camera to keep store a 1-2 second rolling buffer at all times that could be uploaded if an event is logged. Many videos are starting 1 ish seconds after the motion is intended, which makes sense, but if you could do a buffer so a backlogged 1-2 seconds could be included in the upload that would be great! Sorry if I’m not explaining myself well. Y’all are doing great work!

For the price, I was impressed by the buffered pre-motion process.

Forgive me if this has been discussed (it probably has) and I just don’t know how to search for it.

Is there a chance for a future update that constantly records everything over a, say, 15 second window and deletes the footage constantly after the 15 seconds if no event occurs? That way whenever an event occurs, instead of only catching the motion or sound a few seconds after it started, the event is able to pull from the constant recording to always capture the very beginning of every event?

Thanks for moving this! What sparked me asking for this was looking at my mom’s Ring camera event recording. It was triggered by motion and the recording (cloud only, no SD card) started well before the person actually came into view. I figured there’s just a second or two of buffer being kept and only saved upon event trigger.

Because it takes time for camera to respond to start recording, event video usually starts in the middle of events, instead of the begining of event.

To solve this issue, YI camera included 2 seconds cache video before the event trigger and i wish wyze could do the same.

For example, the recording should start at where the arrow pointed, but it started much late (1st pic);
if the person is running, it will start "much later (2nd pic). 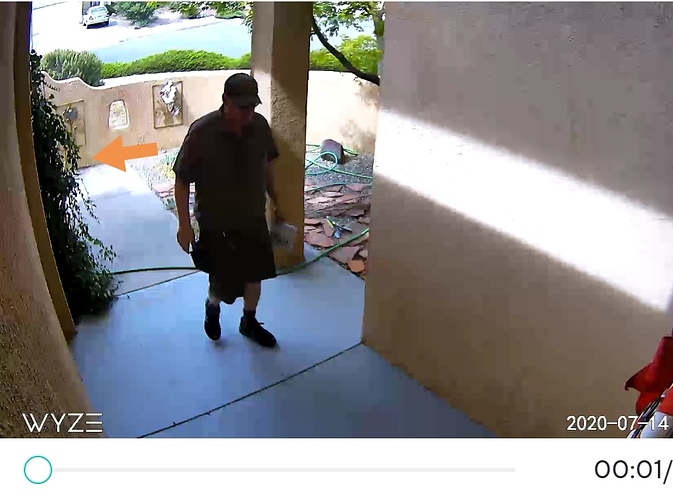 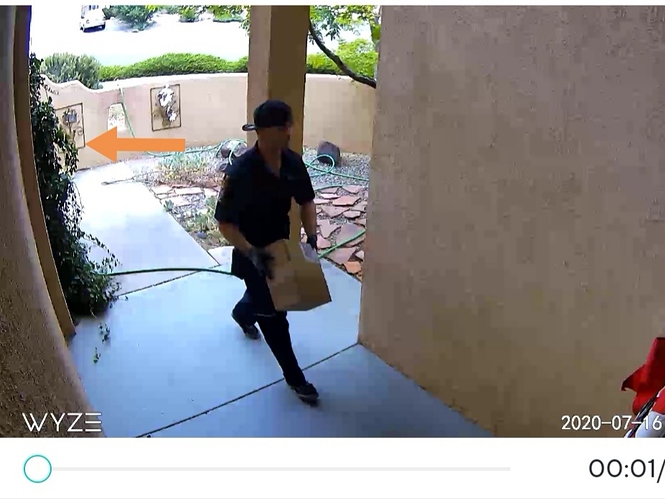 YI camera includes extra 2 seconds (t-1 and t-2 second) before the event, you can see the full video.
for example, without the caching, you only start to see the video from t=0 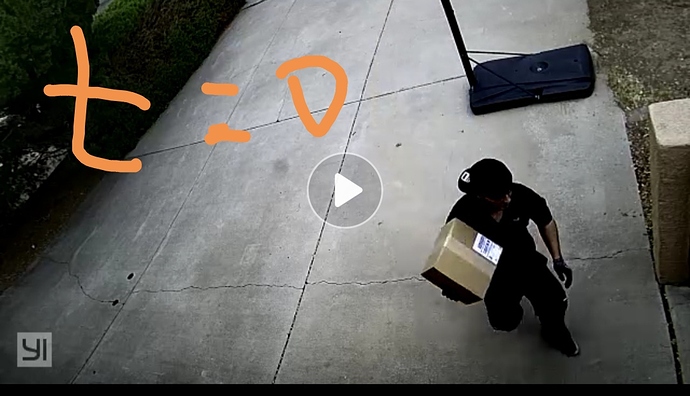 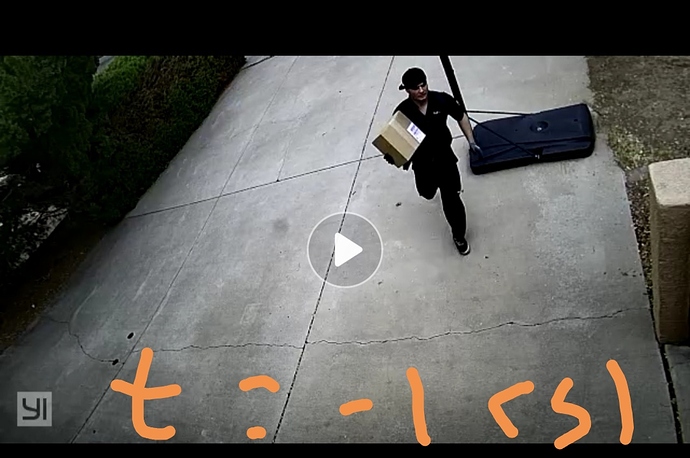 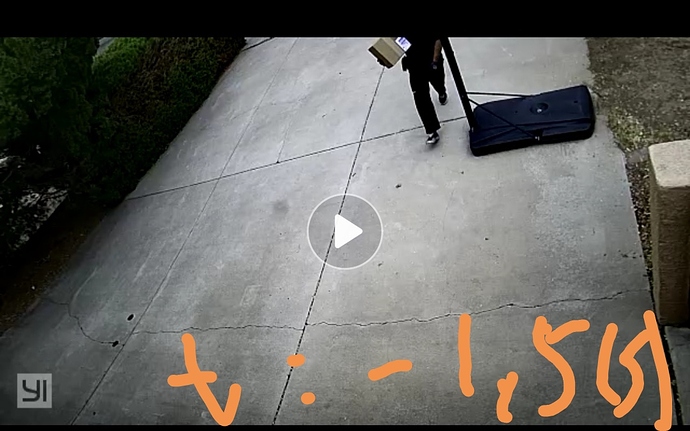 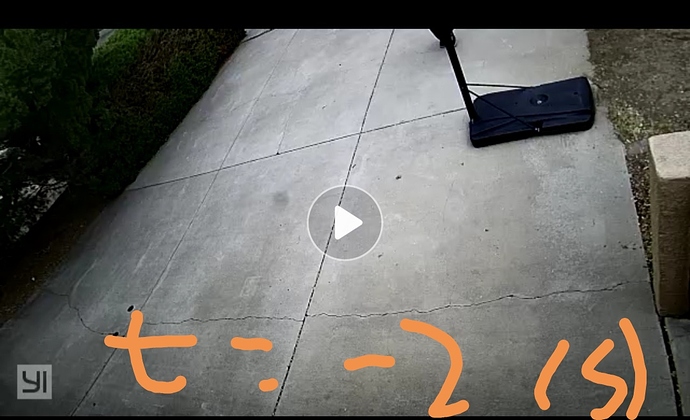 the total length can still be 12 seconds, just add 2 seconds before the trigger and remove the last 2 seconds.

the ability to jump to sd recording from a notification would be sweet… i keep sketching down time stamps on napkins, and then playing hunt and for video…

You can do that right now in the Wyze app - I jump to the exact time of the notification on the continuous recording on the SD card every day using the Playback icon on the individual event screen.

Or am I completely missing something in this discussion?

I almost have the opposite problem. On my v2 cameras, I’m getting 6 seconds of pre-trigger stored now, which means that the 12-second clips are 5 seconds of nothing, followed by 7 seconds post-trigger. I think the ideal world would be to allow configuring the pre-trigger store, per camera, from the seemingly 6 second max down to 0 seconds, or maybe even a second or two after the trigger (though I don’t know why someone would want that).

Ability to adjust how many seconds prior to motion detected that recording starts.

Example: man walking on property doing mischievous things but yet outside effective motion detection range. These cameras don’t always capture the whole moment. If we could start the clip up to 30 seconds prior, we can see whats going on better.

I have one camera where a couple trees pretty much make motion detection hit and miss behind them. Once someone triggers it they are leaving the field of view already.

Also 4k cameras would be awesome!

Timing has been good for me.

Any adjustment is fine but don’t make it less.

Other cameras are somehow “pre-recording” a few seconds, so when an alert is triggered it actually has footage of a couple of seconds before it was triggered. Really helps to see the exact moment of the event without having to record everything before it.

I’m not really sure what you’re asking for here. Do you want to be able to configure what 12 seconds are actually uploaded to the AWS cloud? The default behavior on the Wyze cameras is to give you footage of what happened just before the event notification was triggered. Are you also using an SD card in the camera ?

Hello! Well I had a foscam camera before this one and in it you can enable or disable prerecord. Alarm videos using this feature included a few seconds of activity before the event was triggered.

If this is a feature in Wyze cams, I don’t see it. At least not in cloud videos (I just got an sd for it).

For example, when my cat passes by the detection zone, the old camera would record the cat approach the zone, pass by it, and leave. In the same scenario, my Wyze only shows the cat leaving, so it’s harder to make out what happened.

OK, I think I understand now. The cat might not have activated the motion detection until it was half-way, or mostly across the monitored area. It might have to do with the sensitivity and detection zone you set for each camera. You ARE supposed to see what happened just before the triggered event in the alert notification. You should also see the same behavior if you use the “Record on Event” setting for the SD card. This page might answer your question.