Turn Off a camera via Google Assistant?

Sorry if this has been asked before, but I’ve just linked my Wyze products (six V2 cameras) to Google Assistant so that I can ask that the stream be broadcast to my Sony TV via a Chromecast dongle. Everything seems to work great and I wish I’d done this a long time ago.

I can successfully ask that a camera be turned On, but am unsuccessful when I ask that it be turned Off. According to the User’s Manual (near the bottom), I can say “OK Google, turn on [camera name]” to turn On the camera, but there’s no mention of turning it Off. Thanks.

I can’t say with certainty that Google Home works the same way, because I haven’t had the Chromecast dongle plugged in for a long time… But when I want Alexa to stop playing a camera stream I just say “Alexa, stop.”

EDIT: when I do attempt to turn off a camera via the Assistant, I’m greeted with “Sorry, that mode isn’t available for the [camera name]”. If someone else could replicate and report back, I’d appreciate it

Hi @milehiguy,
Its making me wonder if its a security thing, I’m hunting down to see if I can find an answer to that question. Because if someone wanted to they could just yell at your camera " Hey Google Turn off Camera (Insert camera name here). In most areas that may not be a problem, but in a lot of areas even people you know/trust could use that for malicious intent.

Thanks @TheNerdCorner I appreciate it. Saw your post earlier today and have been meaning to reply. You might also try contacting Isaac, who it appears authored the Google Assistant with Wyze Cam article I referred to in the OP.

Just wanted to confirm that I’m having the same issue. I found this post while looking into a Google search. I was hoping to arm and disarm my entire house using Google assistant. Most of my house is on Smartthings. Smartthings works great, but since Wyze doesn’t integrate into that platform, I was hoping I could use Google assistant to do all of it at once.

Thanks for the confirmation. Different issue, but yesterday I was beginning to believe the Wyze <> Google Home/Assistant integration was busted. When I said just, “Ok Google, show Bedroom Window”, nothing happened. Only when I specified the output video device, in my case a Chromecast dongle named “Sony Bravia”, was the stream cast to my Sony TV. It now works like it did before (no need to specify output device), but only after I set the “Default TV” in the Google Home settings. Am just wondering why I didn’t need to set this previously? Anyway, neither here nor there regarding my OP. Thanks again for the reply. Hopefully we’ll hear from Wyze whether or not the inability to power Off a camera via the Assistant is intended or not.

Hello @michaelreiser and welcome to the community.

Like you, I am a SmartThings user, I have used Webcore to try and tie my WYZE devices to SmartThings (also have to use IFTTT) so far it has worked to my liking. It takes a little work but you could try looking into it also. There is a lot of info on the SmartThings forum.

Thanks Jason. I’ll investigate further in that forum

I’m having the same problem, I can turn on my WYZE Cams with Google Assistant, but I get an error message (“sorry, that mode isn’t available for camera 1”) when I try to turn them off using Google Assistant. Please advise.

Welcome to the community, @kiault. Unfortunately, what you are trying to do is not currently available via Google Assistant. Please see the following support article for information about the Wyze camera integration with Google.

Wyze devices can be paired with and controlled by voice assistants including Google Assistant. Once set up, you can use your voice to command Google Assistant to control your Wyze Cam. Before setti...

Thanks DPR! The one thing that I’m confused about: why is turning ON the Cam via Google Assistant available, but turning it OFF isn’t? It makes no sense to me. If one is available, then it follows that the other should be available as well. This seems more like an oversight to me. Is there a way that a ticket can be opened for the Development Team to resolve this? I wouldn’t think it would take much to fix it, and it would add considerable usability to the device. Thanks again.

There is a possibility that it is set up that way on purpose so people cant shut off your cameras by voice commands. I do not know if that would be WYZE or Google that implemented that if in fact that is what it is.
I do know that security systems and cameras have been changing things so that the turn on can be automatic but the turning off has to be done manually.

I realized turning off the camera through the IFTTT service: 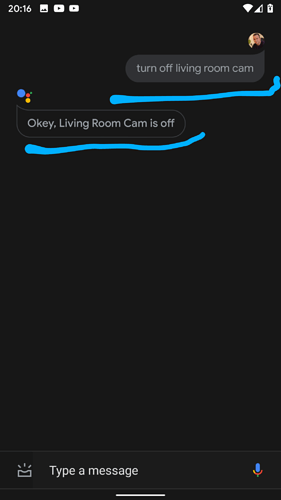 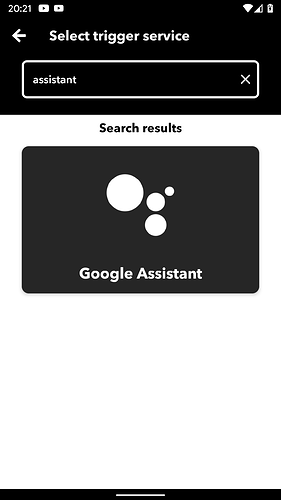 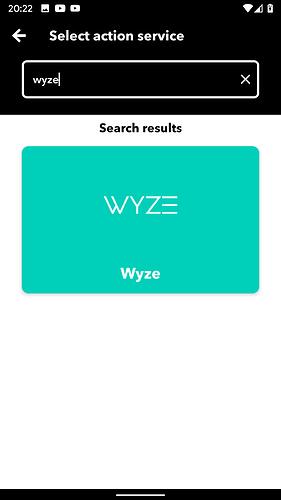 BOOM!! Thank you Yurii, that works great! I had never used IFTTT before. Great resource!

Google assistant can not turn off my Wyze cameras. Not talking about the stream. Just simply turn cams off. But it can turn them on. I use a Google Home routine for both turn them all on and turn them all off. The on routine works, but the off routine does not.

Since I can turn my cameras ON via Google Assistant I should be able to turn them OFF as well!

There was a thread about this from last October (link below). I believe the inability to power Off via Google Assistant is by design, perhaps security related.

Turn Off a camera via Google Assistant

EDIT: I’m glad you posted this Wishlist request. I hadn’t looked at the Oct '19 thread recently. Having just done so, it appears there’s way to do this via IFTTT (ref. end of thread)

I understand the concerns with being able to turn cam pans off if someone walks into your house to burglarize, but my case involves privacy so please hear me out.

My mom-in-law will be turning 91 in December and she lives alone mostly (my sister-in-law is around on the weekends). We (the children and me) need a way to keep an eye on her during the week because she is a fall risk. As a long-time Wyze user, I immediately thought of the cam pans and we bought a v2 to test drive in her house. We eventually want to put in a totally of three to cover all our bases with one of them being in her bedroom. Problem is, we don’t want to peep on her when she’s changing and she’s the one who suggested using a voice command to turn off the bedroom cam pan!

I’ve been playing around with it and I’m able to turn it on if I’ve turned it off using the app, but I can’t turn it off with my voice. Maybe you could make a change to the software to enable the ability to turn a camera off with voice thereby putting the culpability in the user’s hands? Then we disable the ability in the kitchen and family room cams, but enable it in the bedroom cam?

I guess for now she can turn it off via the app, but it would be easier if she could just tell Google to turn it off!

Thank you for taking the time to listen!
Julie

Not ideal, but as a stopgap measure, you could connect your Cam Pans to Wyze Plugs and use Google Assistant voice control to turn off the associated plug. For example, connect bedroom Cam Pan to a Wyze Plug named Bedroom Plug, then tell Google to “Turn off Bedroom Plug”.