Toilet paper holder flips to feed front or back 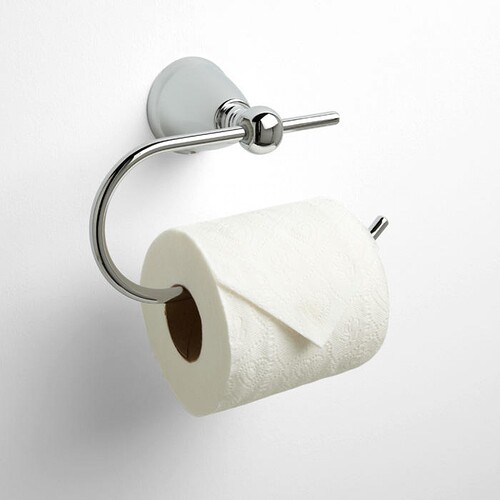 Toilet paper holder flips to feed front or back and with a single wall connection a toilet paper holder can be easily flipped 180 at voice command so it is over the top feed or back. And added feature would be letting you know when it is almost out. This would be part of bathroom combo the includes a device that push the toilet seat when you leave. A simple solenoid that pushes the lid from the toilet tank. It would also be nice to have a wyze car equipped with a privacy hood on the camera standing by with a customized toilet paper rack to deliver a roll in emergencies. This solve a problem in many households.

@Thomas_VanFrank, you truly are a visionary! I think there might be a patent in there somewhere!

Edit… Voice recognition flip command or geofencing routines\rules. I never go in there without my phone!

Be sure to vote for your own idea!

Can we add taser circuitry for when family members load it the wrong way?

What we need is a sensor that measures how much toilet paper is remaining. If there are less than 5 sheets left when the bathroom light is turned off, a personal size Sumburgh horn would sound.

I always get a chuckle over the toilet paper debate. Main rationales I’ve heard:

TOP/FRONT (over) vs BOTTOM/BACK (under) Dispensing:

In the end, 70% of people prefer the Top/Front “Over” orientation, and those with this preference are the most likely to notice and be annoyed when it is not in their preferred direction.

It personally doesn’t bother me much, but considering so many people have a strong preference for and are likely to get aggravated by it, it could legitimately be a product that could save relationships

A person could program it to always flip to their preferred orientation. Probably shouldn’t use a camera to tell who is using the bathroom though…unless it checks upon entrance, but not while inside. Or it could be a non-visual thing, like depending on where the end hangs or something…but not sure how it would tell which person’s preference to use if there are more than one. Maybe who ever buys it and sets it up has it always automatically flip to their preference no matter how anyone puts the roll on it initially.

That’s the craziest thing I ever heard.

A person could program it to always flip to their preferred orientation.

That’s kind of genius. The model in the first photo above could simply rotate 180 degrees at the wall and would naturally perform the flip. Battery could last years.

The “bottom/back” orientation just looks so much better and maintains the great sense of mystery as to whence comes the paper. The “front/top” is just bulging in your face.

More seriously, the innovation I thought the most useful was the coreless roll. I still don’t see that very often. 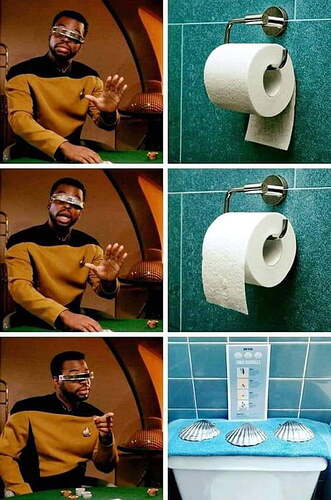 Urghhh, of course I still can’t make out the instructions! 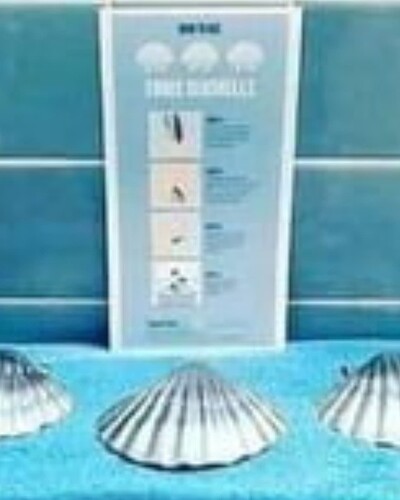 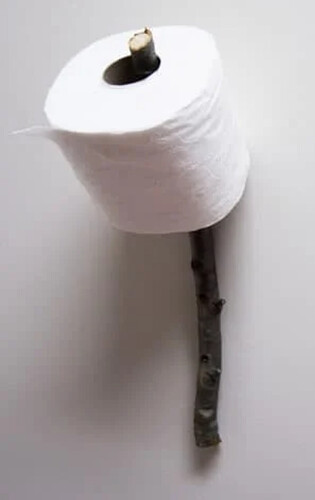 I always get a chuckle over the toilet paper debate. Main rationales I’ve heard:

You’ve thought about this WAY to much!

Guess where he had the time to think about it…

I prefer the West Virginia Wiping Device (WVWD). It consists of a holder for three corn cobs, two red ones and one white. The instructions are to use one red one, followed by the white one to see if you need the other red one.

I believe you are all missing the mark here. Wyze needs to make a voice activated toilet and/or bidet. Koehler already has an $8k smart toilet and there seem to be many makers of smart bidets. I see a new market.

That could lead to all kinds of unfortunate practical jokes.

Yes, A bidet that is Alexa compatible. ‘Hey Alexa, Wash my A$$.’

Where did you get your doctorate in Wipeology Support?

He got his TPhD in Flushing, Queens.

You guys are killing me.

That’s the craziest thing I ever heard.

You would think since I have OCPD that I would be obsessed with getting it on facing out. Nope.

Can I combine it with the v3 cams already in the bathrooms to identify who in on the toilet by facial recognition and automatically position the toilet paper in their preferred orientation?

If it takes off, you can add a smart toilet seat that measures the volume and… Consistency… Of each extrusion using AI, and auto dispenses the correct amount of paper ready for the grabbing!