Please explain WHY you use FedEx SmartPost. Please, no dancing around the issue. Just an answer. If it’s because it saves you a few bucks on shipping costs, just say so.

Some background that has nothing to do with Jimmy’s recent email citing the port issues and seaport congestion. My order left California on December 17. It left Ellenwood, Georgia on December 23. It’s now the night of January 13 (fully three weeks after it left Georgia), and the product is nowhere in sight. This extreme shipping failure has nothing to do with west coast port issues. I know this, because this kind of failure has happened before, long before these port issues, and it’s all because you use FedEx SmartPost, which is the most godawful shipping service on the planet.

So, it prompts the question: WHY do you use it??

They are not going to answer you here. This is simply a user to user forum.
But, I saw a hint a while back in a Wyze announcement. I think they primarily use FedEx as a distribution fulfillment center. So FedEx is packing/boxing and prepping the product for shipment and (I guess this was Wyze’s thinking) whoa, since they are already doing this, let’s let them ship. I guess using Smartpost is an internal FedEx shipping choice and Wyze can’t control it since its all internal to FedEx. Every time I have asked Wyze, they have told me, “its a contractual issue that we can do nothing about”. You think 3 weeks is bad? They have shipped to me in Hawaii and its taken 5-6 weeks. And that was only from the last FedEx point in CA. A week to get from WA to CA, then 5 weeks to get from CA to HI. I swear, it could have gone to space and gotten here faster.

I thought they looked in on these User Forum posts and participated in the conversations, no? If not, I’ll find a better way to try to pin them down. Thanks.

Well, I’m in Puerto Rico, so I’m expecting it to take another couple of weeks! It’s been 4 already.

The thing is, if it left Georgia on its way to Puerto Rico three weeks ago…WHERE is it NOW? Where has it been sitting, and why? It doesn’t take three weeks to get from there to here; I get regular ol’ USPS stuff here in three DAYS…from California!

I have a ZAGG order that left San Diego on January 10 via USPS and it arrived at the USPS regional facility here in Puerto Rico on January 13 (today) - 3 days to get from California to Puerto Rico - and it’s scheduled for delivery tomorrow, the 14th. 4 days, door to door, from the West Coast to the Caribbean.

But Wyze and their crap-on-a-cracker FedEx SmartPost contract can’t get something delivered in four g/d WEEKS?? And can’t get it delivered from Georgia, FFS, to Puerto Rico in three g/d weeks??

I stuck in purgatory between Wyze customer service not responding and FedEx not providing any useful information. I ordered a Scale S directly from Wyze well in advance of the date I need it. Wyze got the shipment out in a timely manner, but it’s stuck in a FedEx facility. I need for Wyze to file a claim for the scale. I’ve already ordered via Amazon so that I get the scale in time, so I’ll end up returning or canceling the Wyze direct purchase. Apparently FedEx has become more unreliable than USPS.

Save yourself some frustration and either order from Amazon or another retailer or buy them at retailer pos. 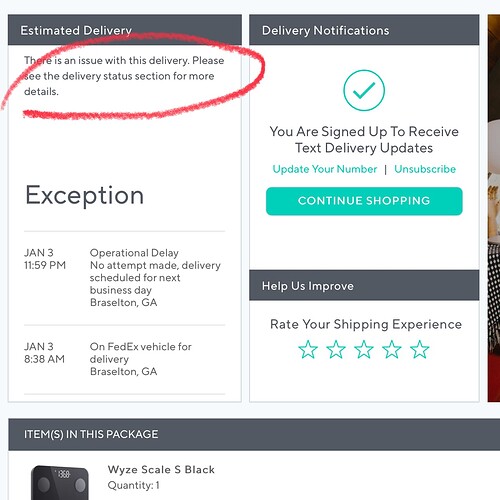 I’m beginning to think the entire FedEx system has quietly turned into an elaborate stolen goods fencing operation. (In concert with eBay of course.)

Cross fingers your tracking doesn’t report any lingering between Vernon and Commerce, CA. 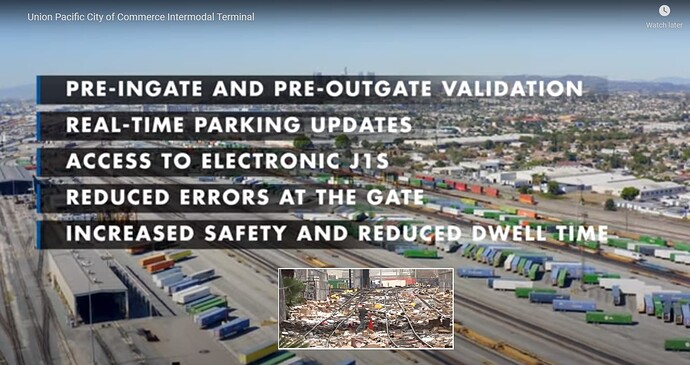 Funny you should say that; just yesterday Wyze decided that the original shipment must be “lost” and they’re (allegedly) sending out a replacement. It’s been 35 days now since the original product shipped. Yeah, it’s “lost” all right.

Yep. I won’t be ordering directly from Wyze ever again; whether I order anything Wyze sells ever again is an open question.