We decided to try camouflaging one of our new Wyze Cams.
This is one of the ideas we tried and wanted to share it with the community.
We know it’s not the greatest but it is better than a camera just sitting in the open which can be easily spotted. Maybe on the next milk carton we’ll take a little more care cutting out the hole. We also cut a large hole in the rear to allow for placement and for the excess wire to be bundled inside if necessary. We placed it near an electrical outlet.
We have gotten a lot of great ideas from others on the forum so far as placement and various ideas of what to do with our WyzeCams.
We would like to see other people’s stealthy ideas for concealing their WyzeCams. 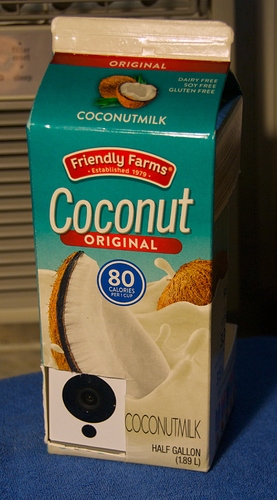 hey @Tuna Ill try to post pictures of my updates for my work on stealth in the afternoon, but I must ask, if you were to use this, where would it be placed? if I broke into a house, just seeing milk on the counter or better yet in the living room would seem odd (I’m sure I wouldn’t think camera) but still

so there is a guy on here that is experimenting with vinyl wraps for the V2. I bought some off of him and they are great. I didnt line up the edges perfectly but it changes the cameras visibility immensely. 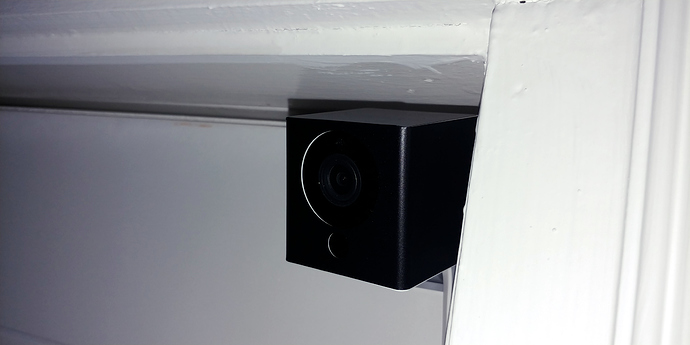 and here you can see the one I have looking through my front door. with the wrap, unless you are looking for it you would never see it. 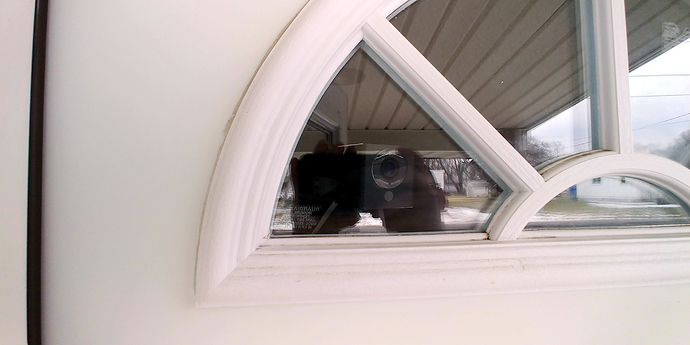 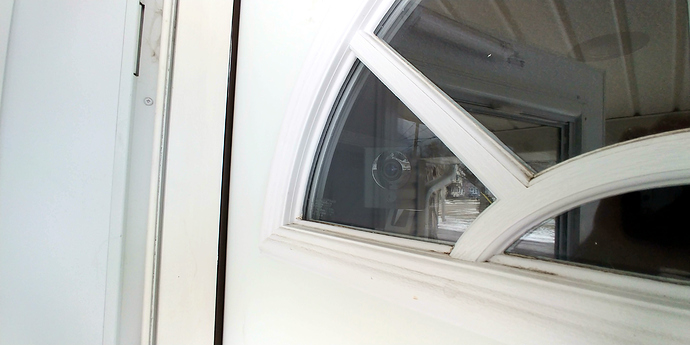 the first picture is just one thats in my living room. not meant to be hidden.

Yep, thinking that too, But, it’s not milk per sae, like cow’s milk that would sour and become smelly cheese type milk. It’s coconut milk and I’ll have to leave some out to see exactly what happens. Anyway good point. But, we had an empty coconut milk carton and said hey, it’s recycling bin material so, let’s give it a try as a test bed type of deal. We could be the type of people who leave our empty coconut milk carton on the counter because we were in a hurry to get to work that morning! Hiding them behind clocks, portraits, pictures, mirrors and all sorts of ideas have come to mind. Yes, the front door with vinyl wrap looks good. You can hardly see that black wrapped camera behind the glass even with your reflection on the glass. If you had dark curtains or a dark upper corner on top of the curtain rod. Also behind the glass in your entertainment center watching the people watching TV, hey now there is a concept. On top the refrigerator, or on the counter top, different containers in the kitchen would work nicely as well. Something that is not out of place in the kitchen, or living room. Use an old answering machine that does not work anymore wires and cords running to it are normal and do not look out of place, a stereo, speakers, Pretty much any old device that has wires, or had wires is a good choice since the wires will not be suspect and can be left right on a table or shelf in plain sight.

I’m going to try and hide mine in my bedroom behind some 2 inch acoustic foam when i move into my apartment, first, i’ll make the Wyze housing black, then use some foam to go over it without blocking the field of view. i’ll be posting when done 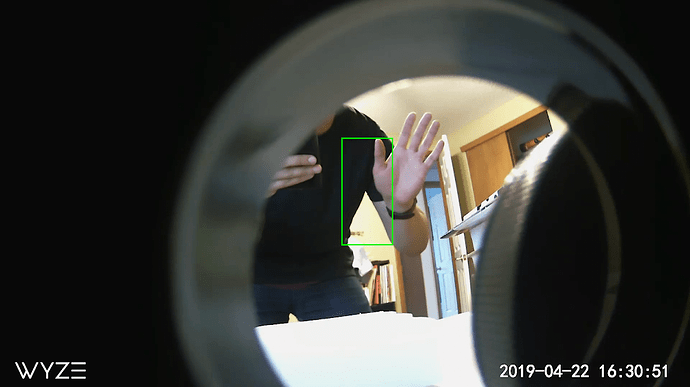 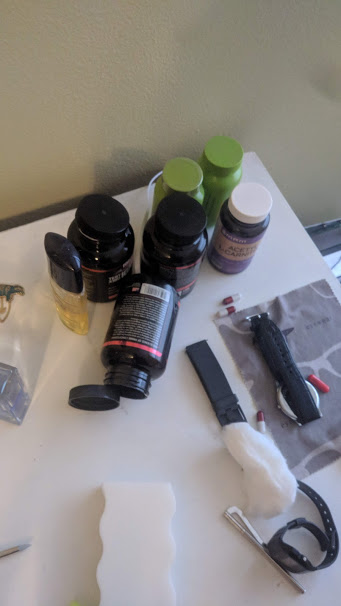 WOW it took me a while to find it…AWESOME!!

Proto Type #1 for my ring cam. 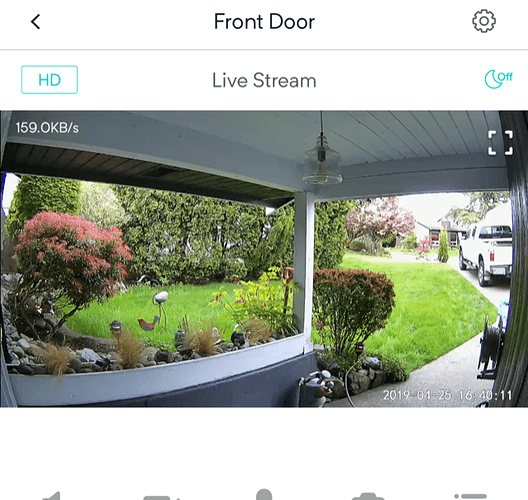 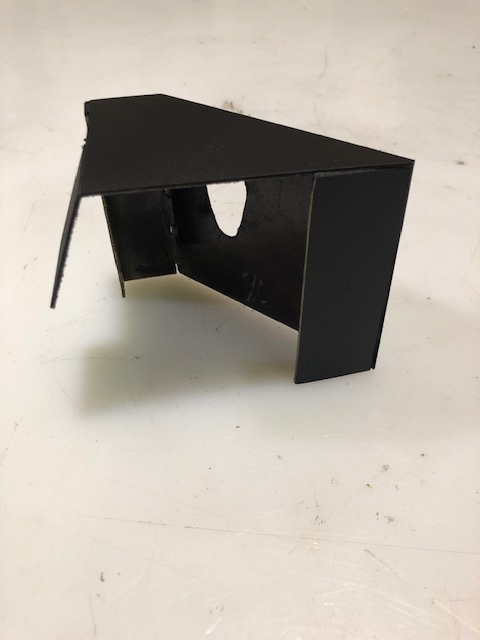 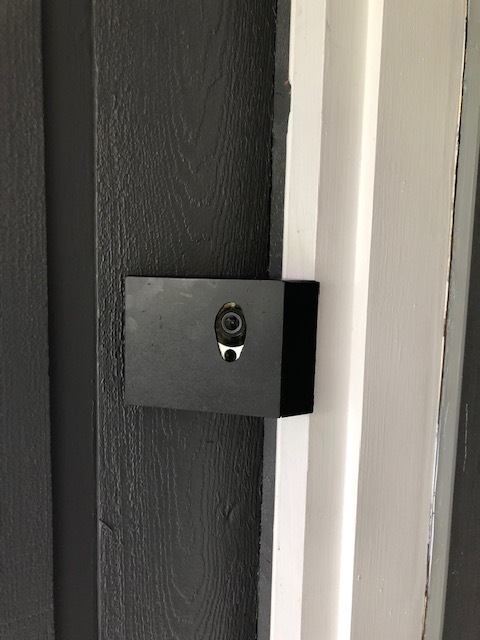 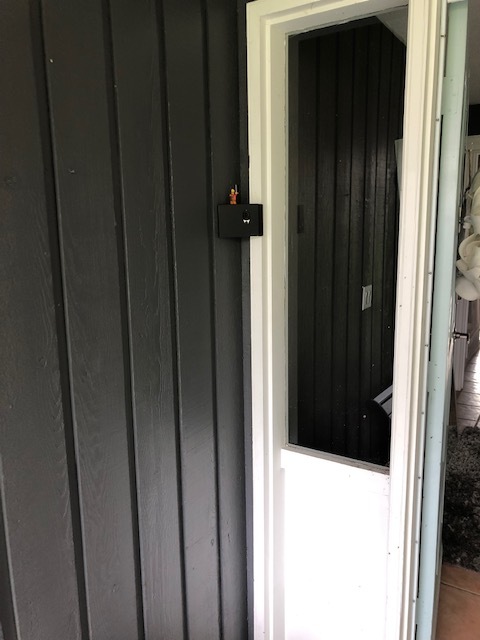 Nice job. For future reference, the 1/4 inch black circle under the main lens isn’t connected to anything, so you can cover that and not have any white showing.

I assumed it was a light sensor.

Instead of fabing a new housing just use some electricians tape, etc to cover up the white part. How’d you run the power wire?

Ps the close up of the install doesn’t show the Lego person, or whatever it is

I already have a new housing laid out on the Micarta ready to snap so I can redo that cutout.
My garage is beside that wall so I drilled through for power wire. I did not have the lego man on those initial closeup pictures. It was a random thought of a way to draw the persons eyes towards the lens as they approach. I can say it works. Yesterday’s amazon delivery the driver looked right at it. It was funny because he seemed pissed that his eyes got drawn to it.

I want to see that video

Consider using false labeling. Paint the camera black, glue some short pieces of wire vertically and
horizontally across the front of the camera to look like a grill. Don’t cover the lense or mike hole.
Print and attache a lable such as “Air Sensor”

I ordered this birdhouse off Amazon. The camera fit perfectly inside. I just moved and haven’t set it back up but this is what it looks like. 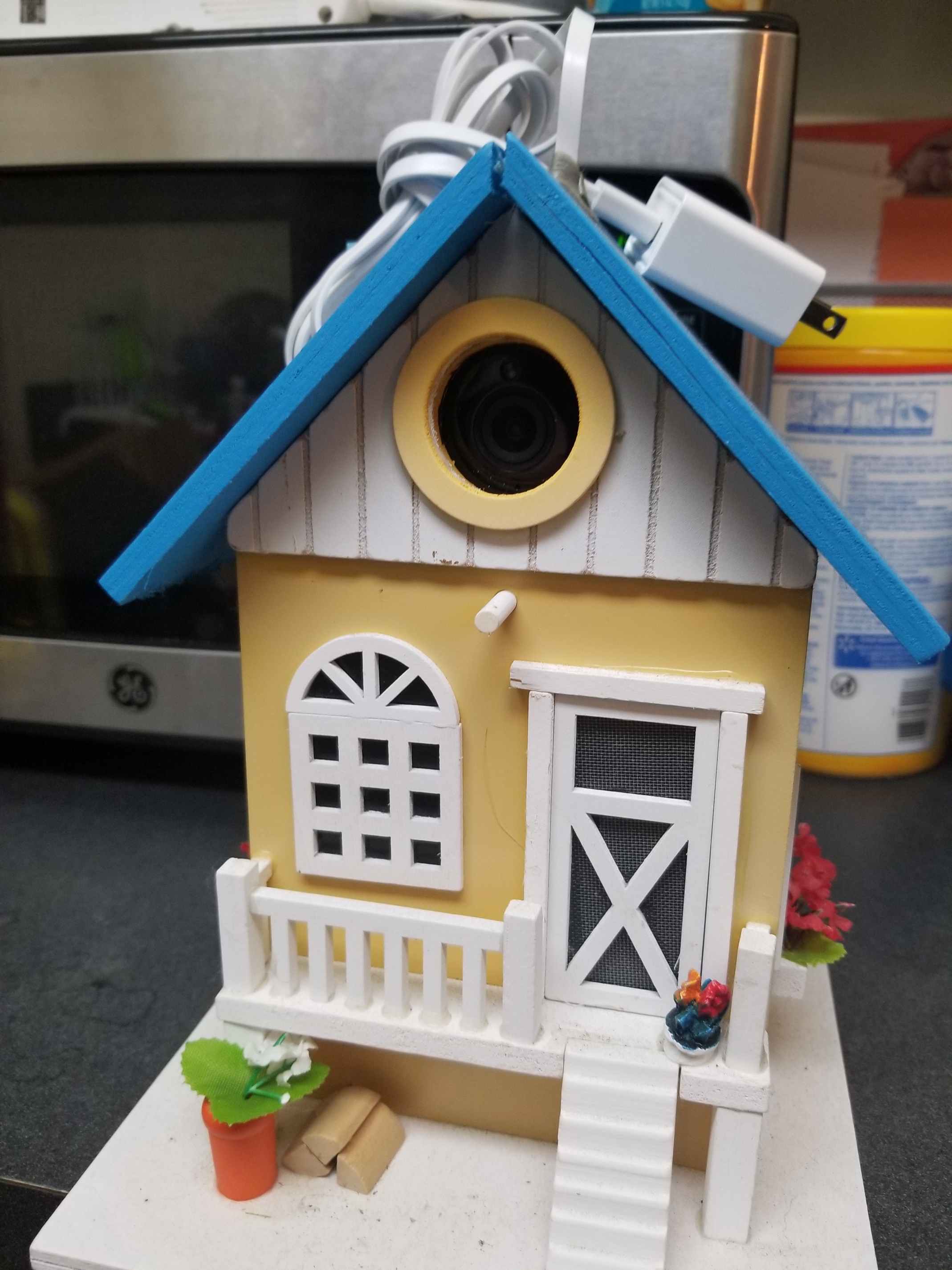 Very nice. You may want to caulk the gap at the roof peak to help reduce rain intrusion.

Yeah, I should have spent some more time on it… I just wanted to toss something outside before I had left town that week (I’m only home on weekends). Wanted something so my girlfriend could see who’s outside and something pointed at the cars. Thankfully it was under the eave. When I get some more time I’ll take it apart and redo it… Add a better way to hang it as well, I was just using the power cable lol.

I just bought a Camasker for Wyze Cam. It looks just like a plant but it’s a housing cover that protects and hides your Wyze Cam. 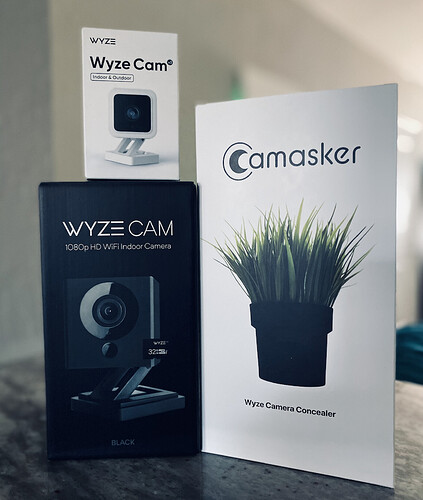 I am lazy. I don’t want to walk the 30 steps to get my newspaper without knowing its there. So, I mounted a V3 inside the newspaper box that is attached to the side of my garage. I was lucky, there was an electrical outlet near that location inside the garage. So, I drilled a hole though the wall, plugged in a Wyze plug and an adapter into it. Ran the cable from inside the box through the walls and plugged it in.

Inside the box, you can easily see the V3 facing you. Just to its left on the bottom of the box is a black piece of tape to block/reduce the recognition of movement. I have a Wyze Sense V1 motion sensor there. Its facing the side of the camera and the tape impedes the motion just enough to remove the false positives that would trigger it. All are mounted with Velcro and makes it easy to adjust or remove as needed. I used the flash to take the pictures, otherwise, day or night, you can’t see the camera walking past it.

So, when the newspaper arrives and my person sticks it in the box, the motion sensor triggers two announcements on Echo devices each in a bedroom and the office area. And a text notification goes to the phone. The announcement informs me the paper is here. And anytime I wish, I can view with the camera. Not that you can see it here, but the camera points towards the wooden gate entrance for the sidewalk that comes to my front door. So, I get a recording of the comings and going in and out that gate.

Of course the gate also has a Wyze Contact Sensor V1 mounted in a black plastic box with a strip magnet on the fence. It too triggers announcements to Echo devices in the garage, the kitchen, the office area and the bedroom. The trigger also informs Alexa to Display the Box Cam on one Echo Show, and the Sidewalk camera on a Fire tablet.

I’d be sitting pretty if Wyze would just make a newspaper delivery person to replace mine that only puts the paper in the box about half the time. 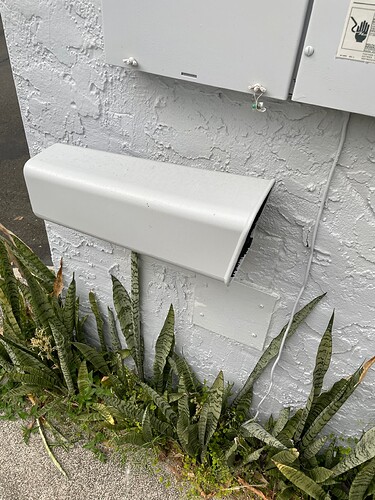 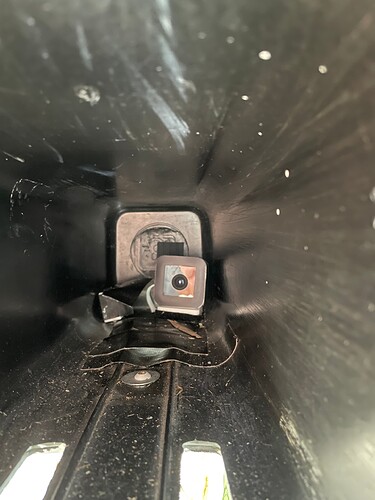 I have a rectangular box like porch light. It has one A19 standard bulb socket. So, I used it to power two Wyze V3, an Echo Dot, a 6 port USB power brick/110V and a Wyze bulb. All that stuff is stuffed up inside the box from the bottom. Oh, and there also two grey flat 10’ USB cables running outside the box, up the wall, (covered by duct tape & painted to match) along the porch ceiling to two more Wyze V3’s (not pictured).

The light exterior has two 5/8” holes drilled about 1.5” from top and side for the camera lens to appear. The exterior is aluminum and would not hold the camera base’s magnet. I tried Velcro and double-sided tape, but I could not adjust the cameras’ position to insure max view. So, after several bad choices, I found some hard steel strips and used Gorilla double sided to attach them to the inside. Fortunately, the slight offset of the camera base folded straight down made it fit flat against the drilled opening. Perfect. (One of the V3’s was painted with grey paint before used inside the light.

The power brick powers four Wyze cameras and the Echo Dot. Velcro holds the power brick and the Dot in place. Big enough pieces of Velcro make it difficult to get them out when I need to do something. So, they stay put.

In one porch light picture you can see a Wyze Sense V1 painted to blend and on the leeward side of the light, so no one notices it. This triggers Alexa Routine announcements inside the house for Alexa routines displaying the two light V3’s on a Echo Show and a Fire tablet. Behind the light on the wall, there’s a strip of duct tape up the wall covering two flat 10’ cables going to Wyze V3’s mounted at the ceiling height. Powered from the brick inside the light.

The porch has this light and a recessed light above the doorway. Wyze bulbs in both because the light sockets remain powered all the time. Easy to reset the entire mess just turning off the porch power in either the inside hall or the garage.

From the view inside the light with the bulb, one of the metal strips has a long narrow magnet under the Wyze camera base. That base magnet is weaker than the other. The magnet keeps the camera/base in place.

The Wyze bulbs on the porch are turned on and off from a Wyze contact sensor mounted on the garage door triggered via an Alexa Routine and turns everything off in three minutes.

The insides of the light look like a sloppy mess, but they are out of sight and everything works and stays in place. Handy having an Echo Dot on the front porch – out of sight. 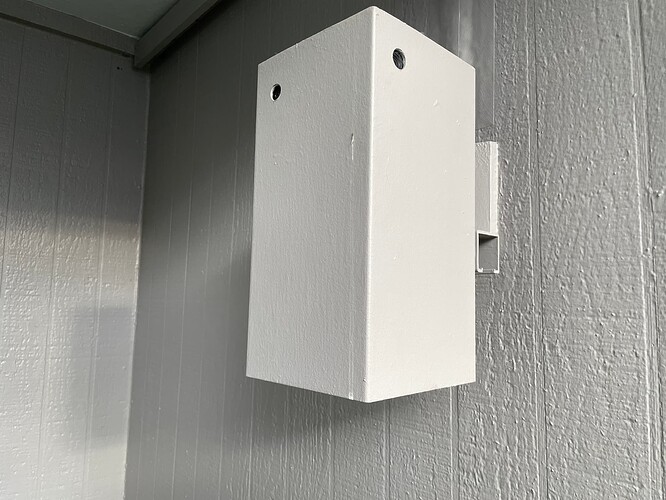 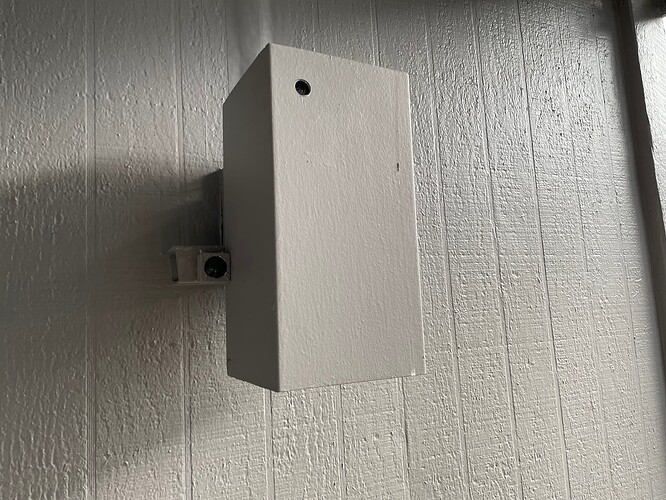 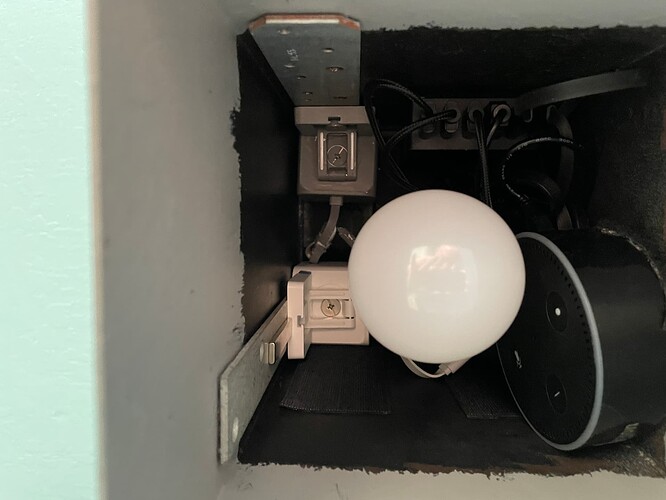 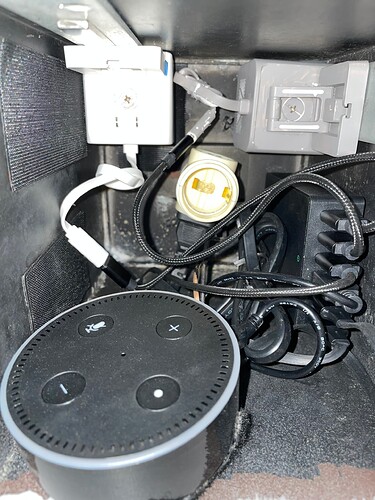 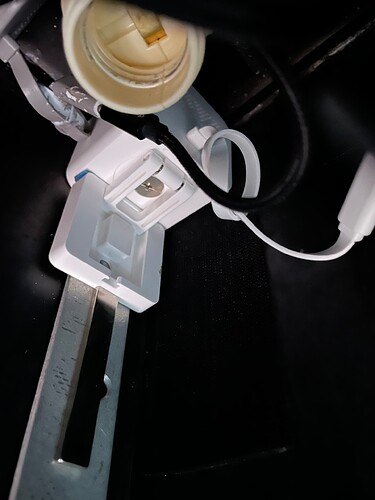 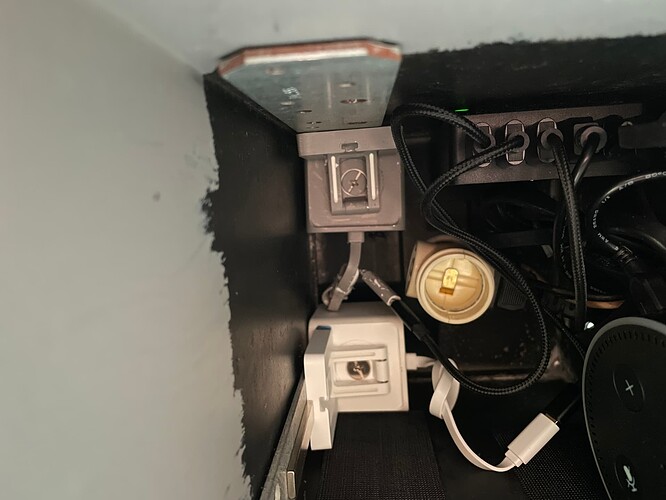