Safely installing a Wyze Switch to power a garbage disposal

First of all, I know it’s unsafe to use a smart light switch to power a garbage disposal. That’s just common sense. What I was wondering is, if I install a Wyze Switch WITHOUT hooking it up to the neutral wire, would the switch just work as a normal light switch (without the option of controlling the switch from the Wyze app)? I am replacing a light switch in a 2 gang box, but would prefer to have both switches match, for aesthetic reasons. The switch on the right side of the box controls the light above my kitchen sink and the switch on the left controls the garbage disposal. I just want to be able to control the garbage disposal by physically touching the switch, that’s all (no smart switch capability). Essentially, I want to install a smart switch, but don’t want it to be “smart”.

That’s a relatively expensive standard switch, but I guess it would still look like other switches in that gang?

You need the neutral to run the switch. Not sure how the switch runs when powered down, but if powered up and you set it up for Classic Control under Single Press, and you don’t apply any other rules or schedules to it, then it will just be a normal switch.

Have you considered putting a standard decora switch next to the Wyze switch? Similar design just without the logo and status light.

You can also get some that while different add function like a light. Which could remove the aesthetic difference. But I totally get the aesthetic reasoning. Adding functionality over form would remove my OCD thoughts. 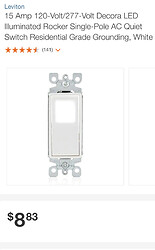 Push comes to shove, have the smart switch control a relay that is actually powering the disposal.

I didn’t grow up with one and always find it somewhat pointless and annoying (in addition to scary from an electrical and destructive point of view). From what I’ve read lately, plumbers hate them and refuse to have them in their own homes. But to each his or her own.

Go to your local big box hardware store and pick up a new dumb switch. No need to worry about a smart switch suddenly turning on at the wrong time.

Yes, but smart switches have come way down in price over the years, thankfully

I just installed it and didn’t set it up through the Wyze app. So, there’s no way I’d be able to accidentally power on the garbage disposal remotely. I’m the only one in full control of the Wyze app , so there’s no one else that might accidentally set up the switch in the app.

Thank you for the suggestion. I guess I’m a little OCD when it comes to the aesthetics. All the rocker switches petrude out from the wall a little, and are noticeably different in appearance. After going ahead and installing the Wyze switch, I actually feel like it’s safer than a rocker switch (as long as I don’t set up the Wyze switch in the app), because It’s easier to accidentally turn on a rocker switch by bumping into it, since it isn’t flush like the Wyze switch.

I completely understand as I know it all too well myself.

Good idea, just don’t add it to the app. I assume the status light will blink constantly not being connected?
Maybe you could add it turn off the status light, then remove the device from the app? But my guess is it will still want to blink since not connected.

That’s a great suggestion, actually. I just feel more comfortable having it perform like a normal switch and not setting it up in the app. I know it’s almost quadruple the price to use a smart switch (as opposed to a normal light switch), but I prefer the look and feel of the Wyze Switches. Also, like I mentioned in another comment, It’s less likely you’ll accidentally turn on a Wyze switch by bumping into it, since It’s flush, unlike a rocker switch which protrudes out a little. Because of that, it seems safer to use the Wyze switch for a garbage disposal, as long as it isn’t set up in the app.

Are you talking about garbage disposals, or smart switches? Garbage disposals are definitely not pointless. They are very useful. You make a good point about wanting the switch to the garbage disposal to look visually different from the switch that controls the light so you don’t confuse the two. I’m going to buy a clear cap that goes over the smart switch, so it doesn’t accidentally get pushed. That will allow extra safety, and a visual identification between the two switches. Also, because the cap is clear, it won’t interfere much with the aesthetics.

I just ended up installing the Wyze switch and not setting it up in the app. Essentially, it’s now an expensive dumb switch

I’m the only one with full control of the Wyze app, so there’s no way the switch would ever accidentally be set up in the app.

Yea, but you churned your own butter to though right?

I’m with you… In my youth/up bringing you couldn’t leave the table unless the plate had nothing on it. i.e nothing to scrape off the plate to the garbage or a disposal.

To be honest, I rarely even use my garbage disposal, because I just scrape all the food into the trash as well. But, eventually, the drain does clog up over time, which puts the garbage disposal to good use. I suppose you don’t realize how uselful something can be until you no loger have it. I realized that when my garbage disposal broke two years ago. But, yes, you definitely grow accustomed to them.

I just use this. 10 bucks. Life changing. No electricity.

Even if you don’t want to use the ‘smart’ capabilities of the switch, you need to make sure the disposal startup power does not exceed the one for the switch relay. It is a relatively big electric motor that will draw a large spike when starting, especially if the disposal is loaded with food / water. It may fry the relay in the switch.

Quite the salesperson, thanks for the suggestion 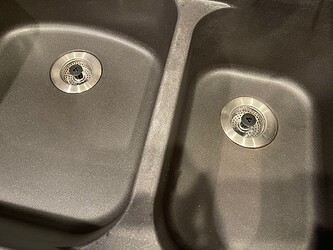 Full disclosure - the rubber handle starts coming off after a while. You can usually squeeze it right back in. Good luck!