Hi,
I would love if you guys could come up with a product similar to the Google Chromecast Audio. This was /is a great product that unfortunately Google have decided to discontinue. I know you guys could do an even better version. 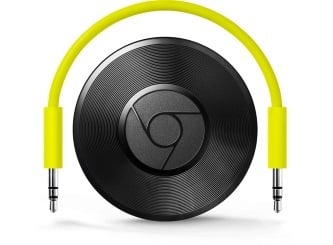 The beauty of chromecast audio is that it is not Bluetooth. It casts direct from your wifi. Much better quality, greater range. Also the ability to cast to several different rooms is great. And a digital output as well.

If you’re a dedicated Chromecast household I guess I see the attraction. But $25-on-sale Echo Dots provide at least the same WiFi and audio out capabilities, no? Still, it would make sense for a vendor like Wyze to enter the “space”. Voted, for your sake.

(For me I got sick of my Chromecasts years ago. A remote control is a must.)

True to a point. I made a decision to go the Google route with my home automation a while ago and have several smart speakers displays etc. I live in France and Switzerland so there are not as many relevant Alexa apps as in the states and google just seems to work better for me. If Google could put a good quality aux out and maybe even an optical out on there Google Home Mini, then it would solve the problem.

I have one echo dot that I keep, but just never use it. The Chromecast audio was just a very simple solution to being able to use my high quality audio gear with online services that we all use more and more. Where Wyze could add even more uses and value is by allowing the home user to stream into their home network to distribute the sound around the house. For example if I want to play some vinyl on my turntable, a widget that would take the signal and stream it over my home network to other rooms and speakers. Or, as I quite often have parties in my house with Dj’s playing, it would be great to be able to broadcast their music over wifi to the whole house. Currently I have to run long cables to carry the audio to other rooms.

I think there is room here for a company like Wyze to bring a simple product to market that could offer some innnovative ideas.

The Echo Dots will do synchronized multiroom audio throughout the house over WiFi. It works surprisingly well. They can do it with or without external speakers.

Edit: But it looks as if you’d need a $200 “Echo Link” device to incorporate your analog inputs.

I haven’t tried it but i’ve read a chromecast connected to an hmdi audio extractor will work.

Yes, that does work. But it’s a little bit of a convoluted solution. A decent HDMI audio extractor costs more than the chromecast audio. Amazon used to make the echo input which is very similar to the chromecast audio but as I have gone down the Google route I haven’t tried it.

Looks like its a very good copy of of a chromecast audio. Never heard of the company and not sure how it integrates with Spotify, SoundCloud, mixcloud etc. I’m sure that wyze could do this properly.

Is there a way to get non-Amazon audio to play through Echo speakers? I’m not aware of it.

Sure. Every Dot has the ability to be used as a Bluetoooth destination. We do it frequently. But that doesn’t get it through the rest of the Alexa network without other measures such as touched on above.

I’ve got one of those. Just a flat round coaster that either connects to a speaker by 1/8" plug or Bluetooth.
Thanks, I couldn’t remember what it was called.

Roku had an audio device at one time too.

There was no indication that the OP was looking for audiophile grade music reproduction.

Bluetooth can support some decent file formats even if the quality is not as good as the optical or DAC output of the CC Audio. For me the bigger problem is that you are playing files directly from your phone or tablet so the BT connection drops in and out as you move around. With CC Audio you are playing files directly from your wifi connection so the signal is far more stable and with alot more bandwidth. The phone/tablet is in effect just a remote to control your files played.

Bluetooth does not support multi room audio because of the restrictions on range but can be useful where there is not a wifi network to piggy back off, such as outdoors.

Yes, I know all of that. I agree, Bluetooth is not the answer for you.
My Bluetooth suggestion was in response to your original post where you had not indicated how important all of that was to you.

I could just picture Bigpadg’s nose raised triumphantly in the air as he typed;