Have three cams but am only able to record on one at a time. Can I record on all?

You can record the live feed on your phone only one camera at a time (because you can only view one live stream at a time).

However, you can install a microSD card into each camera and record either continuously or motion events within the camera for later playback. A 32GB Class 10 mSD card is recommended and you can find those for about $10-12 on Amazon or other online or brick and mortar stores.

One other option if you have an Android device is to install the TinyCam app which can view multiple cameras at a time. I believe (possibly with an in-app purchase) you can record multiple cameras with this app. Unfortunately, there is no iOS version.

usb stick?? If you have a micro SD card in the camera turn on record to MicroSD card. This is the setting for a V3 camera. Open the cam in the app, go to settings, advanced settings and turn it on. 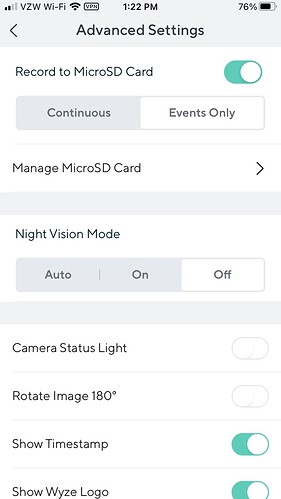 Unfortunately there’s no advanced settings. I’m in v2. See attached pic. There is a slot for micro sd and it’s plugged in.

What type of app and version are you using. I am using an iOS App and even my WYZE Cam Outdoors has an advanced setting listed. I don’t know about the V2 camera, is the sd card on the bottom as shown in these directions,? I assume it is.

Using a microSD card with your Wyze Cam gives you the ability to record continuous footage and recorded events directly to your local microSD card. You'll also be able to record Time Lapse videos. ...

Just using the standard Wyze app. Don’t really know what else there is, but I don’t see any advanced settings in there.

Well there is the iOS app for APPLE devices and there is the Android app. Both have been up dated many times lately with the latest update of 16 September 2021. On the WYZE app home page you can go to the bottom right, tap account then go down to the bottom of the page and tap about and it will tell you which version of the app you have.

Not sure this makes a difference but it looks as though the camera is shared from someone else.

That may actually be the issue, Wild Bill. I’ll check that out. Thanks.

looks as though the camera is shared from someone else.

That is exactly the issue, when a cam is shared, the person it is shared to does not have all the options that the owner has.

Yes indeed, Jason. I have discovered this with a little gumshoeing. Thanks everyone! Problem solved!