Pulling recordings from Base Station

Hello everyone. Quick question regarding recordings on V1 Outdoor cameras.

I previously had SD cards in all of my outdoor cams as well as the base station. I think I read somewhere here that if you have a Base station card installed, it would mess up if you also had camera cards. Or if you had the Plus subscription, it caused some sort of trouble. This could be wrong advice… but regardless, I took the SD cards out of the cameras and have/had one only on my base station.

Now- two issues here, but they’re important because they involve a court case and have important evidence on them. I will also mention I’m a Cam Pro/Plus subscriber for these cameras.

Anyhow- I was unable to get what I needed from the cloud footage due to “sound recording” being off.

Is there any chance that a) I can pull this footage from the Base Station SD card… and b) will it have audio if the camera audio (read: setting to record audio in the camera config) was cut off?

I also notice I can’t rewind/fast forward on these cameras, even though again they have Cam Pro/Plus subscriptions. Do I need to put the SD cards back in these cameras? It’s a little late for the important part at this point, but for future reference… Thanks in advance.

Back up to the base is not compatible and does not work with Cam Plus. The Cameras also do not record to the SD card in the camera unless you are doing scheduled event recording, Time Lapse or Travel mode. I am using Cam Plus Lite and it does back up to the base which currently has 3.87GB of videos on it. 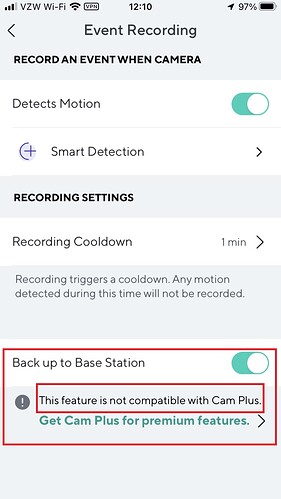 Yes! Thank you for the reminder, this was the issue that I was thinking of.

You can do scheduled recording to the SD card in the camera and use Cam Plus at the same time. Set the schedule for 30 days, no cooldown period, motion events only (Cam will record as long as it sees motion up to the duration you set for each event up to a max of 5 Minutes each video event)

Just a note, I checked this area-- and it does not even have that option on the same screen for my cameras. But that may be because I’m already a Cam Plus subscriber.

I think I have Cam Lite access to my cameras so I’m really thinking of backing off the subscription. I have no pets, none of my cameras are in view of where a package would be… and the only valuable “smart detection” would be person, which I think is covered with Cam Lite.

I would rather have constant recording to local SD and not bother with 5 minute cloud recordings.

As mentioned, this is an example where I actually needed a full recording of an event that has evidence on it… and it was never recorded because of Cam Plus, which is garbage to me. Thank you for your insight.

As I said above set the cam for motion event only scheduled recording not continuous recording to the SD. If you set for continuous the battery will die in 6-8 hours. I’ve never turned the sound setting on to record sound so I don’t know if that works.

Yes, continuous recording is not a feature on battery powered outdoor cameras (WCO). See v3 for this feature.

It is not a good feature of the WCO but continuous recording to the SD in the Cam can be done under video Type. 1 hour is 239.1 MB in SD. 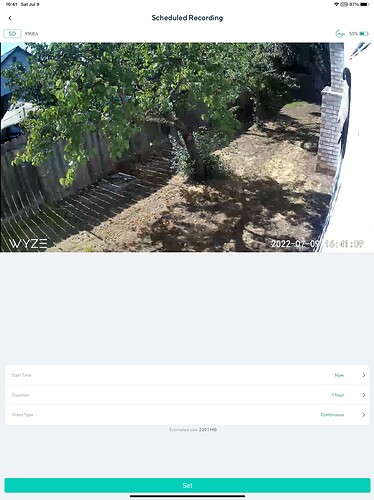 Interesting, didn’t know that was possible. Wonder how that works on a solar panel, @R.Good have you tested that? I would but don’t have internet rn.