Thanks for all your great work!!!

Please add your own thoughts, comments, and use case scenarios to add importance to this topic. I’m sure there are creative Wyze users out there that have great reasons to add this that might not have been considered.

My thoughts can be summarized here:
https://forums.wyze.com/t/wyze-doorbell-rtsp/125496?u=ikifar

TLDR: RTSP support is a must for me, anything I buy needs to be able to integrate with Home Assistant, so RTSP and MQTT would be two great features to add

Sadly, I fear all 3 of the above awesome reasons are exactly why we’ll never get RTSP…Wyze purposely left out an SD card, even though there was space (the lens sticks out pretty far, so they had plenty of space in the bottom half to have an SD card there), and left a cooldown on videos and notifications to try to force everyone onto thier own Wyze Cam Plus subscription. I am guessing this is all to appease their recent investors who will be demanding increased profits and would be very upset if Wyze made it possible for people to subvert their nearly mandatory recurring income stream…If I was a Wyze investor I would push them hard AWAY from doing any RTSP.

Definitely an upvote for RTSP!

That is indeed getting to be table stakes for any real smart home product – really needed to integrate to something like Home Assistant.

P.S. THANKS Wyze – you’re hitting with a great product lineup at a very practical price point.

I agree with everything above. I will be getting a video door bell in the future, but it has to support RTSP. I would prefer the one I get to be this one, but I can’t settle on this feature, even for the amazing price. Like others I plan on integrating the doorbell into Home Assistant. Please add this feature!

Agreed. A doorbell with a "cooldown period* makes no sense at all. Imagine Halloween.

They might as well have forced a CamPlus subscription with it. As I’ve written already it STILL comes out much cheaper than their competition.

the lens sticks out pretty far,

Off topic comment forthcoming…
I have an eye twitch every time i get a new phone and the camera bump gets bigger and bigger…and the battery stays the same - personally i would much rather they extended the phone battery out to match the camera bump - on my new note that would easily double the capacity! And as @carverofchoice mentioned, if they did that with the doorbell they could easily have fit these features in. (whaddya know, i brought it back around on topic again)

And they could simultaneously have made the button look like a button, instead of the big black protruding lens looking like the button.

A doorbell with a "cooldown period* makes no sense at all. Imagine Halloween.

I am guessing there is only a “cooldown” to automatic detection/notifications, not to the button press.

For example, on my current V2’s watching my porch, there is a 5 minute cooldown for events/notifications, but this cooldown does not apply to “Automation” events, so I can open the mailbox sensor I have within that cooldown period and it will still record an event, or my porch motion sensor will force a cloud cloud recording, even if there was an event just a minute ago. I am pretty sure the button press works just like an automated sensor rule event and doesn’t have a cooldown. I think the cooldown is just for the non-button-press motion activated events. I could be wrong though and that would make it almost worthless without CamPlus.

Still, even if it still worked for every button press…Halloween still sucks because anyone who knocks instead, or teens who run up to smash your pumpkins or vandalize or something…now you won’t even have a 12 second recording of it because someone else triggered 12 seconds of video 4 minutes ago while walking down the sidewalk earlier. You have to install a V2 and a doorbell.

With RTSP we could use the doorbell as normal, but have it store 24/7 footage on a network harddrive, so even if there isn’t a notification, at least we have the whole event recorded still.

if they did that with the doorbell they could easily have fit these features in.

That is a VERY valid point here…in another thread it was pointed out that Wyze said they couldn’t put RTSP on their V2’s because of hardware limitations (memory presumably). With all that extra space, they’d have room to put in an SD card, a battery or extra “memory” that could hold RTSP…so there really isn’t a valid excuse for not doing it with the doorbell since they wasted all that space and left the lens poking out.

I would be down with a separate firmware like they have for the v2s to give it RTSP support.

RTSP support is a must for me

Absolutely, if they don’t have the space to include it with the current firmware, then a separate firmware would still be really awesome!

I would even extend the request to make the entire Wyse system so that it does not need the internet at all, Provide the software to allow people to set up a computer in their house to serve any feature that needs the power of a computer.

Perhaps offer some cloud related services, if the user doesn’t want to dedicate a home computer for this. Though, those not wanting to use the cloud should have as smooth and easy an experience at set-up as possible. And/or perhaps also offer a special hub designed, and configured to work with your cameras.

Tout the above far and wide. Let people know that they don’t have to depend upon a cloud server or the vendor’s continued existence for their Wyze equipment to work. Let them know that all the other brands depend upon the vendor’s server forever.

I agree no RTSP no sale.

To be fair: I would LoVE RTSP, but would I really need it? No.

I already have multiple cameras in the area. Adding yet another angle is not a huge deal breaker, for me. The 12 seconds of video clips I’d get is Ok enough.

On a similar note; I would also like an update to the RTSP v2 firmware to address activity performance issues. That version hasn’t gotten any love in a while.

I would love if Wyze had a way to accept community funding to fix specific software issues that otherwise wouldn’t get addressed for whatever reason.

Come on Wyze, you are dropping the ball on this one… This feature was requested BEFORE on the other cameras, you knew the demand was there. Listen to your clients. Here is your chance to have a real winner, finish the job…

Hello, I bought one and paid for it but have not received it yet. Do you have my record on file? Alan Sims thanks Alan

You kind of have a big problem here, Alan. Check the fine print: 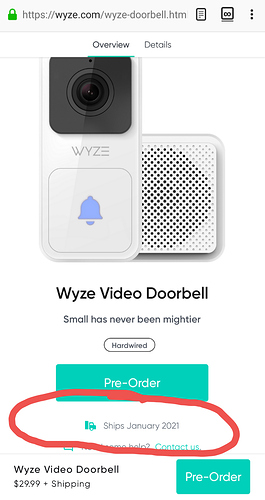