Hello,
I got two Wyze V2’s running for a few days now, and apparently when I’m using the iOS app it’s been eating up my cell data plan quite rapidly (about 4 gigs in 2 days!) Since these are new to me I was using them a bunch during the 2 days, but I was on my home WIFI network, (the same one as the cameras are set up on)–although I had my iPhone Wyze App set to use cellular data if needed. Apparently for some reason my app is using the cellular data instead. Solid connection through WIFI, any ideas?

it shouldn’t be. wifi should be priority when you are connected. shut off your cellular data and see if you are able to connect via wifi with no possibility of it being able to use phone data.

Thanks for your reply, that is what I thought should happen – using the WIFI first.
I did turn off the Cell Data and it worked fine through WIFI. Then I turned my Cell Data back on and it used cell. Because of this, I turned off Cell data usage from the settings for the Wyze app. Not sure why this is happening, perhaps it is due to something in the way I set up my router to handle the ‘cam network’.

are you sure its the Wyze app?

there are a lot of apps that “secretly” run in idle that might be doing it too. I’ve not head of this issue with anyone else (yet) and this seems like something people would catch fairly quick. your best and quickest bet right now would be to download an app that tracks data usage. it will show you which apps are running in the background and which ones might be causing this issue. you might be able to find one that trakcs it on both wifi and mobile data that way it wouldn’t cost you to find out which one is doing this. if it turns out it is the Wyze app ( this is not how it is supposed to run) this would be a pristine example of something that would need a log sent into the Dev’s via the app so they could look further into it. it is something that could potentially cost someone quite a bit of money, and OBVIOUSLY

Wyze is not about costing anyone unneeded funds.

I am quite confident it was the Wyze app. I went to iPhone >Settings>Cellular>Reset Statistics, and then allowed the app to use Cellular if needed. I was still connected to WIFI, and streamed live footage a bit and then it showed in the updated statistics that the Wyze app used the cell data.
Typically I use less than 2 gigs of cell data over the course of a month (I used less than 8 gigs over the last 4 months), but like my post said I used about 4 gigs over the last 2 days.
Again, I wonder if I somehow created this issue due to how I have my ‘cam wifi’ network set up.
My “fix” for now at least is to just not allow the Wyze app to access Cell Data at all. If for some reason I choose to use it from outside of my wifi network i can always just turn it back on temporarily.
I hadn’t read of anyone having any issue like I am having, that is why it’s making me think it could be due to my wifi network set up. I may move the cams over to my ‘normal’ wifi network and see if it does the same thing. Thanks for the reply !

I’m glad you found a fix! although hopefully only temporary

make sure everything is up to the latest version too.
I would shoot the devs a log on this just in case its the start of something bigger.

It is a ‘fix’, but not really the most elegant way.
I updated the firmware of the cams when I got them a few days ago, and downloaded the iPhone app the other day.
I will do a bit more playing around with it and see if I find the real solution. I figure I will be doing some work on the entire setup in a few more days, as I have another V2 and a CamPan on its way. I also won’t be using the iPhone as much to view them as I have an alexa Echo Show 5 coming .
Just figured I would check in here and see if anyone had any info that I may have just overlooked as I jumped right into all of this a few days ago.

Hi, you don’t mention what iOS you have on your phone but I presume it is pretty current or the latest one. Since iOS 9 Apple added a ‘feature’ called Wifi-Assist. It leaves the cell data on and and pull data through the cell network when the wifi isn’t as stable. My son had this same problem with cell data being high and we found this article helpful.

With iOS 9 and later, you can use Wi-Fi Assist to automatically switch to cellular when you have a poor Wi-Fi connection.

Recommend turning off the Wifi-Assist feature if you have a data limit on your cell plan. If not then your phone will continue to use cell data even when on wifi,

Thanks mkztg1,
Currently iOS 12.1.4. I have had Wifi-Assist off during this time, but yeah I could see how that would have been a possibility if it was on. I’ll hopefully track down the root cause of my issue when i re-do my system Monday/Tuesday when I get my additional cameras.

I’ve been eating up cell data lately so I’m going to check my own stuff - thanks for the motivation! One thing I found on mine was background refresh was on for the app. I have used it some on cell and wonder if that might be the culprit. I’ll post back.

Followup :after testing different cams by monitoring data use on and off wifi, with refresh and cell data on and off, it sure looks like the app is sometimes using cellular data when on wifi. I have used the cam at home with cell data and refresh turned off repeatedly and every time the cumulative data consumption for the app goes up. My fix for now is to turn off cell data for the app. Letting @Loki know hopefully to proceed. In the meantime, no cell data for app.

good to know, I might get in touch with someone about this to see why it is. it seems silly and counterintuitive.

I have not seen this happen myself. I’d suggest that those who have seen it, submit a support request through the app with inclusion of the log file, preferably close in time to when you notice the app using cell data when it shouldn’t).

At your suggestion @Loki I just did that. Turned on cell data for app, viewed for about 10-15 min all on wifi and cell data usage for app went from 276mb to 297 mb. Data had been off for hours before turned it on.

Update: In the interest of thoroughness I repeated the issue on a second cam. First was aV2, this was a pan cam. Data use went from 297 to 300 mb. Sent in a second ticket listed as a followup to first.

Just out of curiosity, what platform are you on? I have seen the same thing on iOS, but to a lessor degree.

I’m on IOS, latest version, IPhone 7+. Started about a month ago going over our data plan. Just thought it was an anomaly until this popped up.

FYI, we added a field to the forum user profile to designate the platform on which you run the Wyze app. New users are required to enter it, but we have no way to force existing users to fill that field. But feel free to edit your profile and make that selection. 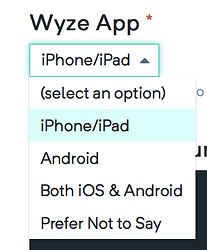 I shut my Data OFF until I need it when out and about and not on Wi-Fi.
Solves a mess of problems.
I once was downloading an Audible Book and forgot to shut down Data. I left home and it continued to download and ate up a bunch of Data.
Lesson learned.