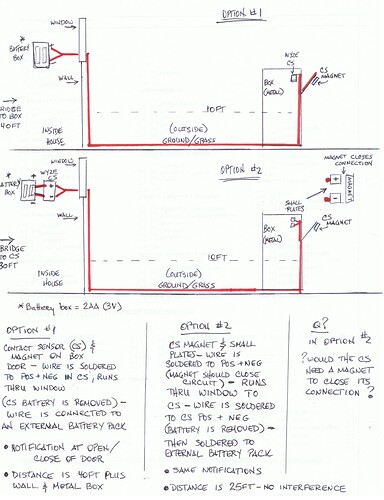 My situation is this.

I have version 1? contact sensor that I want to use on a package dropbox but due to distance (about 40ft) from bridge and the box is metal and the obstacle of a house wall it doesn’t stay connected.

I cannot move the bridge or the box. And I don’t want to reinvest buying the v2 sense products, want to use what I already have.

My idea (see attached diagram) is to run a 2 lead wire from the box, either using the sensor outside or inside, to the inside of the house, powered by a battery adapter pack (2 AA batteries). If outside I will need to put something on the inside to indicate that the door was opened. Like a little light switch or something.

After looking at my diagram, can anyone see anything that I missed? Is this a doable idea? Has anyone ever heard or done anything like this before?

I don’t see the diagram. But with the right mind, anything is possible…
I am wondering if an IR motion sensor would work for you?
Rich

Change the file into a jpg. So it will show in the post.

Don’t mean to p** on the plan, but unless I am missing something this is not about securing the package from the thieves; In fact having your metal box near the road just offers a more accessible action for stealing.
Second, unless the magnet provides hundreds of pounds of closing force, this has very little protection for the security of the contents.
My own belief is that for any delivered package, it would be more secure if it is left at the doorstep/front verandah than a metal box too close to the road. Just my two cents.

Below is a description in pictures of how I got around my metal mail box blocking the signal from the CS sending unit. 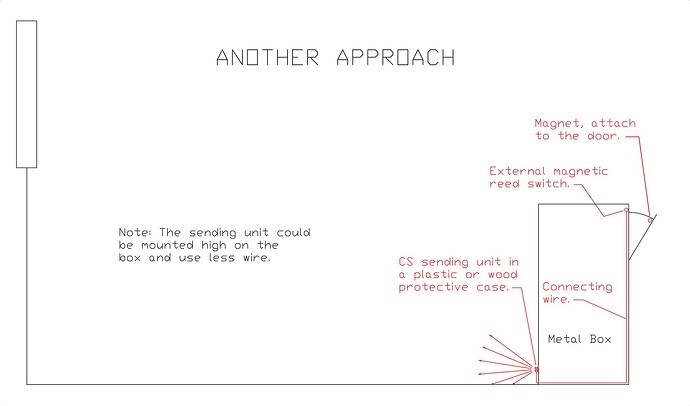 This is the magnet glued to a piece of plastic that is then bolted to the mail box door. 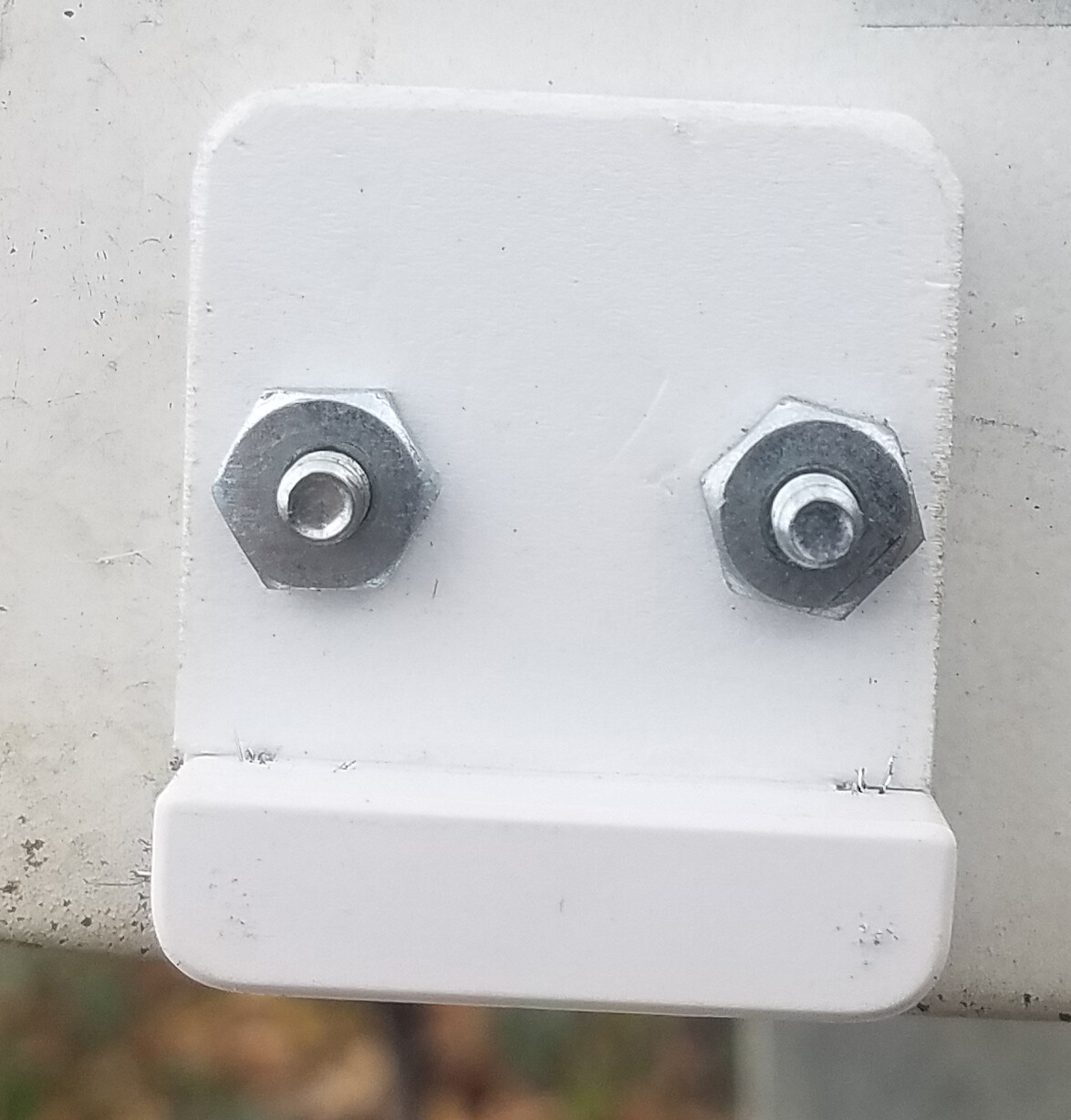 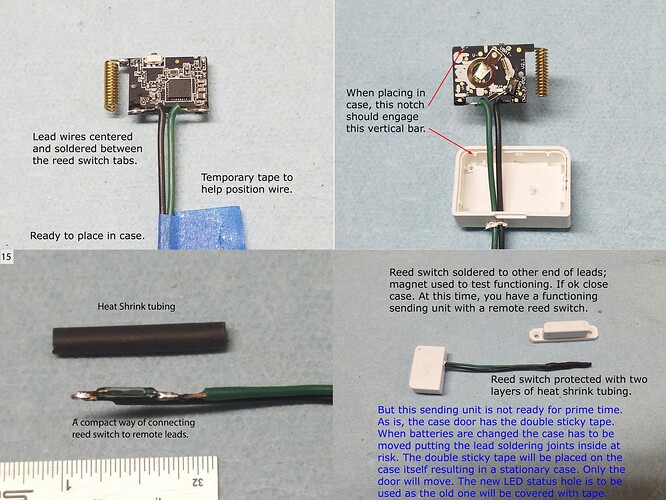 This is a simple modification that has worked well for the last two years.

I have since come up with a better idea that utilized a Samsung Smartthings motion sensor.

Sensor was soldered to a AA battery pack and everything taped inside the door, where a package wouldn’t touch it but I can still access to change the batteries, so when a delivery occurs it senses that motion and triggers a Alexa routine. Ended up doing the same with a Wyze contact sensor on the mailbox. Sensor inside of a protective case on the outside, battery pack in the mailbox. When the carrier opens the mailbox the sensor is triggered as opened and I get an alert from Alexa that the box was opened. The battery pack is taped to the back of the box so no mail can touch it.

Once in a while you have to pop one battery out on the motion sensor to reset but that usually is due to no motion for long time. Have had the same batteries installed since Oct '21 and I’m just now at 90%. Thank you YouTube for the idea to solder on a battery pack and ditch the $$ coin battery.

Some times things just aren’t apparent until you think about it for a while. And some times I impress myself

Sounds pretty simple, any chance you could send a couple of pictures?

Sure when I get home tonight, I will post them. 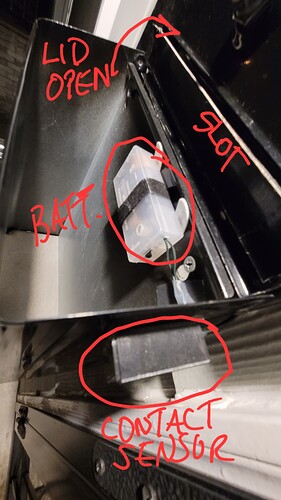 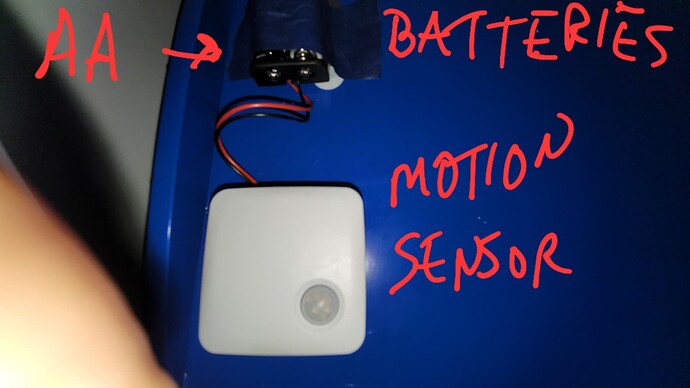 Will post better pic with details over the weekend. This was a promised rush job.

I read a tip once a while back to use a short USB extension cable on the back of the V2 camera and plug the Wyze bridge into the extension cable (separate it from the camera) to help with communication. I did this, and my mailbox sensor is working easily at over 40 ft consistently. Before I put that extension cable on there, it was a crap shoot. I had to reboot it all the time. Good luck with your solution!