Outdoor Cam's battery is kaput - are there any places that do battery replacements?

I went to charge one of my outdoor cams and then I noticed that it wasn’t responding on the app so I went through all of the reset procedures except it wasn’t responding at all anymore so I did some online reading and it seems like the battery is dead - which kinda sorta checks out, it had been running down increasingly quickly from charge to charge. I bought it at original launch and it has survived several fairly brutal winters in the midwest so I’m not terribly put out by the failure.

I’m not handy at all and have no desire to do this myself but I would like to not throw away the camera. Do local cell phone repair shops do this kind of work or is there a place I can ship it for reasonable cost to replace the battery?

But if you recycle it, can I have the mount? I lost mine and Wyze won’t sell replacements.

I have a couple of WCO mounted on screw on mounts like these:

@jcwillia1 Or you could just plug the camera into the power adapter and use it indoors or in a garage instead to throwing it away???

It’s currently not responding plugged in or not

Oh hey, I have a box of those as well…with covers for my V2s. I didn’t think if that. Thanks.

R.I.P. WCO. I have 4 that installed in October 2020 so I may be having camera funerals in the near future also.

well that sucks. e-waste it is, I guess…

There is a recent post here someplace that shows the cam being disassembled. I don’t know if you could find a battery pack for it though?

I don’t do DIY at all. If I can’t find a professional who can do it, it goes away

I have less than zero patience for tinkering.

You might be able to find a local “fix it clinic”…

I would not pay anyone to repair a $39.00 camera. It cost that much just to ask how much?

I’m referring to the now common local free clinics that help people fix things, rather than the things ending up as waste.

I can remember reading quite some time ago that, hypothetically, a large enough pile of information might result in the formation of a ‘vacuity’. Gosh that sounds as vacuous as ‘Hawking radiation’, but I needed a synonym that didn’t contain an ‘H’ word. At any rate, seems like that ain’t happening here. The paucity really doesn’t even contain the obvious ‘suck it up and buy some more of our fine products’. Maybe now that the kids are old enough to go out at night I’ll just post them on sentry duty.

The Kiddos would not stand, nor would they even sit, watch. So I was forced into taking it to ‘Little Jimmies Free Fix-it-Faster’ Should have known when I spied the Hafenereffer it wasn’t going to end well. 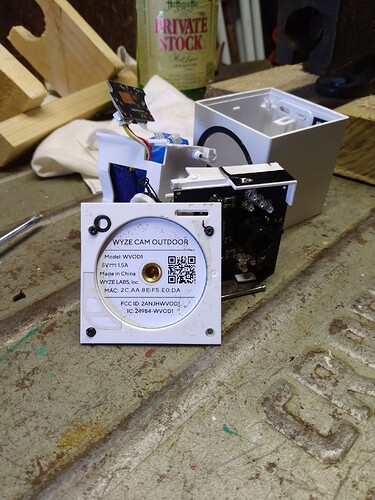 Maybe you should have had a shot of Jameson instead of that beer, you would have more pieces of camera to play with