The outdoor cam tends to start recording several seconds after an event should start. For instance, daily, my wife parks, gets out of the car. What is captured is her back to camera as she passes the front of the car. It does not capture the car pulling up, parking, or her getting out of the car.

PIR detection can be quite tricky at times - it doesn’t always reach as far as we may think at first.

This thread has some fantastic detailed information by @Seapup on cam placement to maximize recording what you actually want to record:

Anyone else having issues with the new WCO not picking up motion soon enough? Perhaps I need to tweak my settings? See attached example. The cam tracked the driver all the way back to the truck, but never picked him up until he was at the front step.

I have moved it around. What’s odd is, the cam will pick up a garbage truck in the street, but not a car pulling in the driveway. Our drive way is about 60 feet long, or so.

Bigger and hotter I guess.

What’s odd, is that would outside of the detection zone.

Yeah, don’t have an answer for that one except things like that often seem to happen to me - what I want resists detection, and what I don’t want detects effortlessly!

But seriously, @Customer is spot on - trash trucks usually have hella big heat signatures. Very often just started vehicles departing do not trip our marginal PIR sensors, but incoming vehicles that have been running awhile usually get detected. I can almost see the mirage lines of heat waves drifting off of the city trash trucks now…

There are several instances where it detects a car driving by. Our street end in a Cul De Sac. So, any cars going West are coming from homes – those would be “colder” vehicles. What’s hard to explain is that a car going 25 mph (ish) will get picked up on the road, just past the driveway, but a car pulling in to the driveway at 1 mph does not.

Well that makes sense too if the driveway car is approaching the camera while the street cars are crossing its field of view. Ever notice supermarket doors don’t open when you’re in front of them?

It’s funny that you say that. Last weekend, the doors wouldn’t open until I was right in front of them.

This is the typical detection field of a standard PIR chip through the fresnel/non fresnel options on the market. Notice the path that the Human (left lower corner ) would take and how far ( and few beams ) it registers per distance depicted to the right side. Also note that at certain distances approaching head on ( Gray focused area on graph ) you may not get a detection at all. [image]

Follow these guidelines to place your Arlo camera for best connectivity and motion detection. 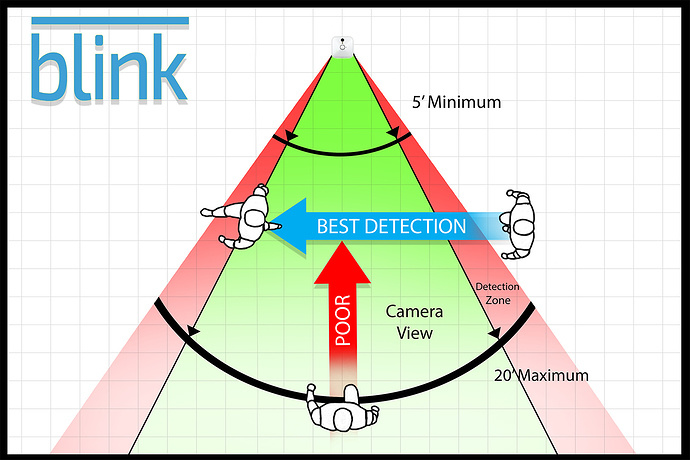 Oh that is a terrific diagram. Somebody should pin it here and maybe Wyze should, er, reinvent a version of their own. Bookmarked post.

I guess you’re really better off putting a PIR on the corner of your house.

It seems it’s best to have multiple cameras pointed at the same area from different angles to capture everything you want.

I am very frustrated with the huge delay as to when my Outdoor Cam actually notices anythin at all. All I ever get on any of my captured videos is either the top of the persons head or even more frustrating, their arse. I know I would not be able to identify someone if the only tools I had were a video of their arses strolling away from me.
I got this camera to figure out who is vandalizing my motorcycle. All I get is an amazing HD vid of the top of their heads and an even clearer video of their A**.

If this delay is not addressed by Wyze, then What’s the purpose of having a security cam installed at all. I’ve owned this Cam for 3 month’s and have hours and hours of useless Video Captures. Please help me understand if I am doing something wrong.

The battery powered outdoor cams take a couple of seconds to start recording because they have to wake up from a low power mode first (when the PIR heat sensor is triggered). You would get a lot better results from a powered V3 or similar camera.