Agreed. I want v3. But I really don’t need everything that Cam Plus offers. Plus it’s per camera, where Legacy Person Detection is unlimited cameras. So it was very disappointing to learn that. It has me rethinking my plans for camera’s. Probably will do v2’s inside the house, and use v3’s outside. And then use motion sensors to detect when someone comes around the house. That, I think, will be more reliable than using motion detection in the camera. But before I do anything, I’m going to wait until HMS is out. I’ll be incorporating it in my overall plans, as well.

And if Wyze ever decides to do a similar Legacy Person Detection service for v3’s, I’ll be first in line to get it, if the price is right. And knowing them, it probably will be right.

I think some people reported it was working for a short while.

If that’s true, that means it’s technically possible in the v3, and is just a decision Wyze has made to not allow it. This would be even MORE disappointing since they did their sob story to get us to buy into Legacy Person Detection. Which I was happy to do, and even chipped in a little extra on the name your price thing. To get that service on v3, I’d even go up another couple of bucks per month, just to get it on all my future v3 purchases!

The problem I have is when a tree branch moves in the wind, motion is triggered. I don’t need that. I need something that will only detect something like a human being, and nothing else.

It takes a lot of trial an error with placement, maybe even taping over parts of a motion sensor but you should be able place it in such a way that it won’t pick up a branch. My issue with non camplus cameras with only person detection is that if that branch of yours triggers in the wind, or headlights from a car light up the area and then a minute later a person walks through you won’t know. The camera will have triggered the 5 min cooldown and you won’t get a person detection alert during the cooldown.

A tree branch is just one example. I have bees that like to fly in front of it. Birds. Other animals roaming around on the ground. I can set the detection zone for branches, but even that isn’t foolproof.

And that’s a good point, as well. I’m annoyed with the cooldown issue, as well. But by putting a motion sense in place, and having it trigger a video recording, that should eliminate any of those issues. I would have to turn off motion notification in the camera itself. But that’s ok. I’ll still get a notification. It’ll just be the motion sense triggering it and not the camera itself.

You can leave the camera detection on and use a motion sensor as well. The cool downs are separate (as low as 45 seconds for the motion sensor). If you were interested in catching small animals the motion sensor isn’t that great for that. From my experience the motion sensor (PIR detection) is much more accurate at detecting actual movement from human sized objects at close range (25 feet). Pixel detection picks up too much unwanted noise which is fine if you have camplus and it picks up everything that you can just filter after.

If that’s true, that means it’s technically possible in the v3

Well sure it’s technically possible because technically the feature doesn’t take place IN the V3, or in the V2 for that matter. It’s entirely on the Wyze server (“cloud”) end. They’ve chosen to limit it to keep in rough approximation of their original free PD promise and not lose too much.

It’s why I’ll be selling my 6 cameras and moving to ubiquiti to pair with my networking. Cost be damned because wyze firmware and policies are just sad.

Would reconsider when they release a smart toothbrush.

I thought it was a poor practice of the company (Wyze) to offer person detect initially and then they try to charge for it. Planning to switch to another solution - drop cam, nest, etc.

Agree! I am not happy with the course Wyze is taking. Not the transparent company I fell in love with.

If that’s true, that means it’s technically possible in the v3

Well sure it’s technically possible because technically the feature doesn’t take place IN the V3, or in the V2 for that matter. It’s entirely on the Wyze server (“cloud”) end. They’ve chosen to limit it to keep in rough approximation of their original free PD promise and not lose too much.

No, I think it’s primarily in the firmware of the camera. Once the camera detects it, it sends it to the cloud. And I’m pretty sure that there isn’t a constant video feed going to Wyze either. So it is possible that the firmware they developed for the v2 may not work for the v3 because of hardware differences.

But either way, they obviously have the means to do it in the v3 since cam plus can do it. It’s really just a matter of Wyze deciding to allow for the same service as “legacy person detection”. All I want is person detection for one low price for all camera’s I own. I don’t need pet detection, or anything else that they are adding to cam plus.

No, you’re mistaken. None of Wyze’s current cameras do local person detection. They sense motion or sound only, and then submit a file to the Wyze cloud servers for analysis. The firmware is thus largely irrelevant as all it is controlling is the initial motion detection. The decision to exclude V3s from legacy person detection is entirely a business call on Wyze’s part. There is zero technical reason. 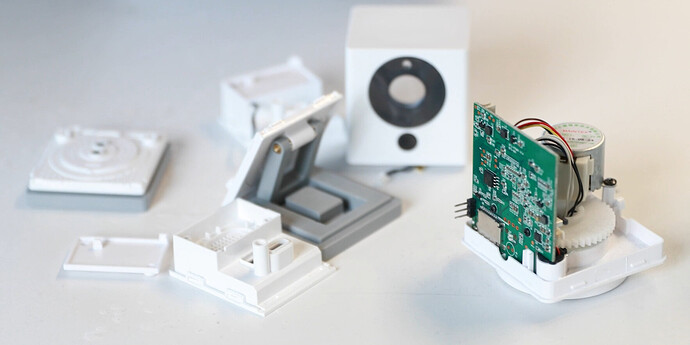 How Xnor.ai Managed to Squeeze a Deep Neural Network onto a $20 Wyze Camera

This article was originally published by Xnor.ai. It is reprinted here with the permission of Xnor.ai. Wyze, the provider of affordable smart home

"The obvious answer to this problem is to use AI to build a more sophisticated understanding of the visual environment that the camera sees and then to send notifications only when something really relevant is happening, for example, when a person is detected. This approach exists today on many smart home cameras, but almost all solutions are running the model and inference on a GPU in the cloud. These cloud-based solutions are slower, open to more privacy compromises, and typically require consumers to cover the cost via a cloud subscription fee.

Wyze was clear from the beginning that they wanted an on-device solution on their $20 camera that did not require them to charge customers an additional cloud-service fee."

This is what I remembered from back in the xnor.ai days. So it is an on-device solution.

But again, either way, there is no technical reason why they can’t do their “legacy person detection” on the v3. It’s a marketing choice Wyze has made.

(The rest of that article is an interesting read, btw)

No. That is very old news. As I said, none of Wyze’s current cameras do local person detection. The XNor firmware was removed many months ago and is not supported in any way (technically or otherwise) by Wyze. It plays no part at all in Wyze person detection or in CamPlus. I should know, my cameras still have the XNor firmware.

Our only point of contention here is whether the firmware has anything to do with Wyze’s capability or decision about providing legacy person detection to V3 users. It does not.

I was sad when person detection was no longer free but I mean, CamPlus is $1.25/month. It literally can’t get much cheaper than that. You could be paying $6/month for Nest Aware after paying $300 for the camera…

Have fun paying 15 times more per camera and almost 5 times more for person detection over at Nest! (aka Dropcam which was bought by Nest 6 years ago)

Ok, so based on this:

Update 9/9/20: Hi, everyone! App 2.13 is releasing today but we’re not sending out the email to folks eligible for the person detection experimental pay-what-you-want plan until tomorrow morning. We have scheduled website maintenance tonight and didn’t want to frustrate folks.

Original Copy: This is the copy of the email being sent out shortly to everyone signed up for the newsletter that received the free person detection promise when we announced the upcoming separation from…

It seems that you may be correct.

But in the end, I don’t really care how any of this works. I want legacy person detection on all of my cameras, including the v3. I’m not even sure I understand why this conversation even matters anymore. v3 can run legacy person detection, whether it’s on-device or not. That’s all I care about. But if Wyze wises up and allows for Cam Plus to be for all cameras for one low price, and be able to select what I want to detect, that would be acceptable, as well. I’m not paying $15 a year per camera for my nearly a dozen camera’s. But $15 a year for all camera’s I own for JUST person detection, well, then I would be interested.