No fuse wire in Doorbell Pro

I received the Wyze Doorbell Pro and no Fuse Wire comes with it. It comes with the standard but not the pro?? You need this to bypass the doorbell chime. Then they said I need to go to my local hardware store to buy one. Seriously? So I go and they have no idea what I’m talking about.

Where do I get a fuse wire? This is ridiculous.

I’d assume something like a 3A fuse and holder would do the trick. Most doorbell transformers are current limited so the fuse is a belt and suspenders safety measure. To be on the B&S side I’d go to the hardware store and get a fuse and holder and wire it in like the fuse wire.

I imagine Wyze will send a fuse wire but if you can’t wait the above is a way to get up and going before it comes.

Kinda hard to say omitting of such an item is ridiculous when there is so much else going awry these days. 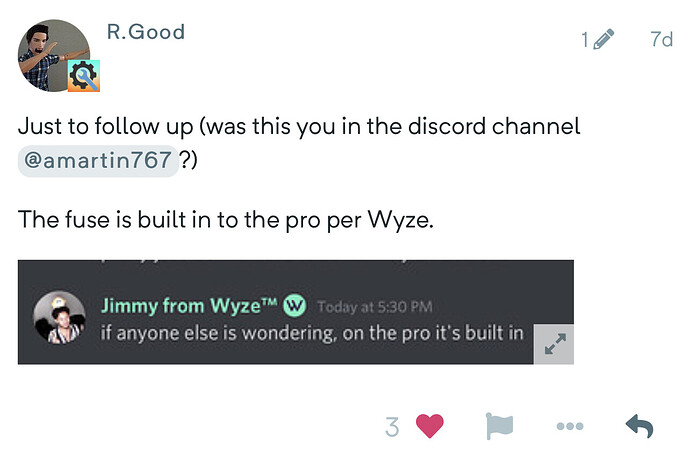 So I went ahead and skipped bypassing the chime box but now it’s humming.

So basically he said he don’t need to bypass the chime box anymore?

This is a bit out of my comfort zone and knowledge. Not sure where to begin.

Unless you bypass the chime it will hum since current is flowing through it. You need to remove the (hopefully 2) wires from the chime terminals and connect them together. Just like you would do if you had the fuse wire except there is only one connection not two.

Fantastic. So I will just connect the trans wire and the front wire together instead of using a fuse wire (which I guess technically connects them together with a fuse in the middle)?

Also, what is the jumper wire for?

Probably to add some length to a wire that is too short. I’m not sure.

Someone duh and found another post where Wyze said they included the fuse in the Pro, so you don’t need to bypass the chime with a fuse wire. Although their instructions clearly say you need to do it.

So I’m going to just connect the trans and front wires using a wire nut. I am getting a constant humming from the chime if it’s hardwired.

Just adding my bit that I connected the front and trans wires with the included wire nut. Hum went away and the doorbell is receiving power.

Probably a good idea to have that added into the setup instructions.