Sound like a good execution. I’ve had Wyze Cam Pans outside the house for about two years now. Dealt with the same issue but I played with the sensitivity and adjusted the fixed area I wanted it to monitor. If you replaced the current Cam with the Cam Pan, you’d solve your gaffer tape issue. Just make sure the camera is not exposed to rain or substantial sunlight.

Amazing that some ppl are just hell bent on spamming a topic to make their own point.

Anyway, good post @bdragule. Very useful suggestion. I have the same problem you stated. As good as person detection is getting now, I’m thinking of finding another use for the motion sensor and your suggestion will be good to remember. Wonder if a neat way to reduce the entire viewing cone of the sensor?

At the price point of the sensors I am honestly not that worried over tape residue. Personally I found that experimenting with tape, then replacing the tape with Acrylic paint or fingernail paint worked really well. I have a sensor outside that I used that approach to narrow the FOV down with and another inside that I did something similar with.

Using diluted polish remover took the paint off and left no residue and did not harm the sensor.

Perhaps it a bit too late now but did you try adjusting the camera’s Detection settings?
At first, my camera was picking up my flag attached to the roof post until I found that I could adjust, resize and set a suitable detection area. No more Flag, Street motion, people walking dogs, etc. just my front sidewalk and steps.
I do like your motion detector setup.
Best,
Artimus

I did not try that, but I’ll also give it a shot.

Nest’s solution was the ability to draw several polygonal shapes in the areas you’re interested in, which worked well enough. However Wyze just gives you a rectangle which doesn’t exactly work for this camera angle.

I’ve had a couple of lights that were not compatible with IFTTT. found a routine on Alexa app that basically lets me integrate almost any device like the motion sensor to other devices. My Lightify bulbs comes on when motion is detected on WYZE PIR and goes off when motion is cleared. Time for Google and IFTTT to step up to the game.

Alan, is this the hill you want to die on??? Some arguments are just not worth the time and effort… People seem to forget how little they paid for this technology… Give it time. Karma my man, KARMA

I did indeed try adjusting the cameras sensitivity. Because the camera uses pixel change to determine movement there was no way, even at the lowest setting, to avoid wind blown foliage from triggering a movement event. By the way this is one of the reasons the cameras are not meant for outdoor use.

Using a PIR detector helps avoid wind based false detection. Since I have switched to the PIR sensor I have had much better results.

Back to the topic.

My person detection was less than ready for use in its performance. Wyze will get that prefected eventually, but the one we had might as well not have been there. Mine reported shadows, dogs, cars, and the occasional person and a person. No complaints because that feature was not what I bought Wyze for, if fact it wasn’t available when I bought in.

Even better than rubbing alcohol for removing glue…WD-40

BONUS!!! and it’ll keep the trusty eyeball lubed up,( at least on a Pan)

As far as I remember during my set up you can set a rectangle up to indicate the area you was to track motion on. And set the sensitivity mode.

Any help for the sensitivity in the wyze cam? When my motion sensor light kicks it it triggers the wyze cam as motion…I have it in a window facing outdoors and it is forever picking up “false movement”

Don’t forget Shurtape also. They have been making gaffers tapes for a very long time here in the USA and believe me, it’s great tape! We use it not just for cable holding and such, but we use one type (you can write on) for marking mixer controls.

In fact, I just removed some of it from a mixer that was in use (we are replacing it as it’s an old analog one) and both types of tape peeled off with no residue whatsoever! I was actually surprised because I know the tape on the backside (holding cables down) has been on there for over 15 years! The only problem I had was that some got stuck to itself and I had to cut the tape to get the cable out all the way.

The marked up tape on the front though had no residue at all!

I get mine from TapeWorks

Boy, I wish mine was better than the original! It triggers for my goats, dogs, quick lighting changes and sometimes for reasons I can’t even figure out after reviewing the incident several times. I submit the feedback as convenient.

Hello Mjrally
The method referred to below solved my problem with moving tree shadows on a hot driveway triggering the motion sensor. 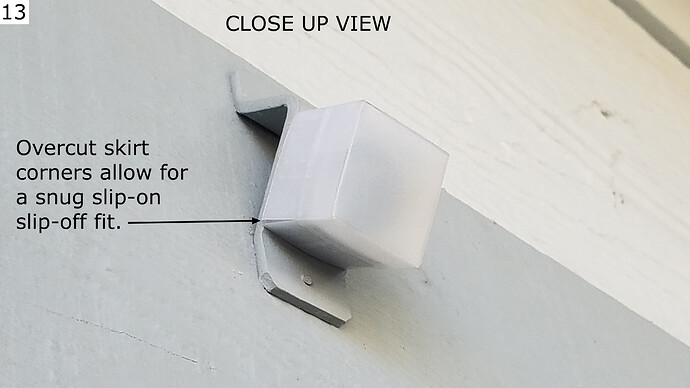 M 134032×2268 779 KB
The above picture presents two approaches to reducing motion sensor sensitivity.
The first is the 30 deg downward mount. In my case, the sensor only sees the driveway - no sidewalk and no street traffic.
The second is the milk jug plastic shield filter. It stopped head wave triggers from moving shadows on a hot driveway.

Here is the link to it:
Reducing Sensitivity of Motion Sensor with a Mask - 2
Here is another link to a simple shield:
Motion Sensor Shield
The link above restricted sensing to about a 5’ radius.
Victor Maletic.

Most people don’t know what gaffer’s tape is. And since you used the slang, gaff, I suspect you are in a business that involves taping down cables. Just curious. I recently retired after 40 years in broadcast TV and corporate media production.

Or goof off or plain baby oil put on a cotton ball and just leave to sit for awhile.