I set a motion sensor to control a light bulb, using schedules and automations. It works, except I can’t adjust the light bulb brightness and hue to wake up in anything other than daylight 100% bright mode. Not the best choice for my application. Has anyone else had this problem?

Are you not able to set the values you want when you create the rule?

Yes, the only option I have in the Wyze app under “Schedules & Automations” is ON or OFF. But there are 3 horizontal lines to the right grayed out = and non functional. Then there is an optional timeframe below “Time” to block out daylight hours and days of the week.

It really seems like there should be a way to program lightbulb intensity at power on. Thanks

This doesn’t sound like a term that is used in the Wyze app. You sure it’s the Wyze app? The closest thing I found is is the three lines that are used to reorder multiple actions when creating triggers. Can you delete the trigger or rule and remake it from scratch? How about a screen shot?

It really seems like there should be a way to program lightbulb intensity at power on.

Yeah, there is. When I schedule any bulb to come on by Rules, I can also “program” a temperature (aka color) and brightness.

When I select the bulb to turn on… 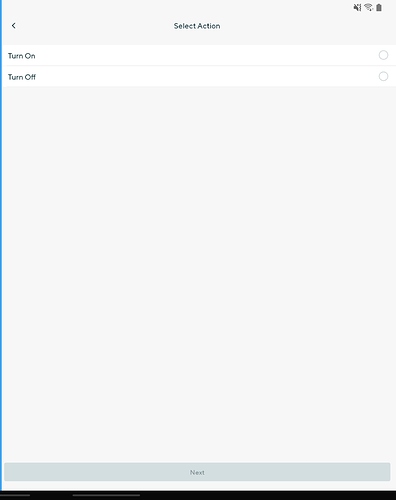 It allowed me to set the temperature and brightness… 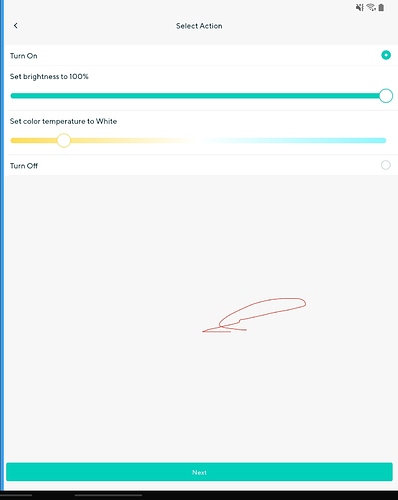 Try to post some screen shots of what you’re seeing.

Where your screen says Next, my screen said Save.

I upgraded firmware on my bridge and now I get the temperature brightness settings after hitting save, now says next. Thinking this may have been the problem. But it works now.
Other than that, it does seem the sensor is a little too sensitive for the covered outdoor porch and light- the light is switching on and off periodically. Still cant tell how bad it is since I only set it up yesterday.

I have one which turns on the front porch light, and every time a car drives down the road - +30 feet away - the porch light will go on. I have to make the time to go adjust the sensor, put some blinders on it so it won’t react to every passing vehicle.