Locked into one screen

Just reporting a potential app bug. After downloading a time lapse and then watching there seems to be no way to exit the playback screen without closing the app and restarting. IOS -,IPAD and I phone. App v2.5.35 beta 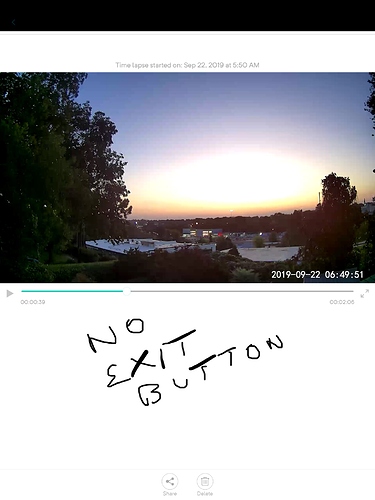 Glad you mentioned that issue. I saw the same issue on Android. I made a lengthy time lapse and could only exit by exiting the app.

What version of IOS are you running. I’m wondering if it is a similar problem I reported with regards to the same thing happening in IOS when creating rules. Navigation buttons are gone. The ticket in question was #318839.

I had noticed this earlier before updating OS but I’m now running 13.0. Happened on my Ipad also under 12.4.1. Just forgot to report it with all the more significant things

I did 5 lapse today and forgot to get them. I hadn’t noticed that yet in android beta but I will be sure to look for it in the morning.

On my IOS it will also occur when viewing video from album thru app.
I have gotten a response already from tech support and sent them logs,etc.

good to know. I will check for that too

so I was able to check and I’m not locked into anything. I still have my back button and I’m able to get out and do anything just as I regularly would. That is on the Android beta and Android 9

It is. I use an iPad as a secondary tablet. Once I get to the camera group view, I can’t go back to the home view to say, check the notifications.

Either that or there is a hidden button that rolls into view when an area is touched. I thought this wasn’t a bug until I saw this thread.

being beta and our logs going straight to the devs, I would flood them with this issue so they are aware of it.