Last night, I noticed my V2 camera making a clicking sound every 15-20 seconds. Investigation revealed that it was going in and out of night mode. The IR emitters were turning on and off, and the internal IR filter (a mechanical assembly) was moving in and out of position. That’s the source of the clicking sound.

The camera was in a dim but not totally dark environment, pointing at an interior stairwell. Night Vision mode is set to Automatic. What I think is happening is that the illumination from the IR emitters is fooling the light sensor. As night falls, it gets dark enough to activate night mode. The IR turns on, and the ‘brightness’ as seen by the sensor increases. Camera thinks that the IR is not required, and shuts it off. The brightness as seen by the sensor decreases. Camera thinks it’s dark and activates night mode. Repeat endlessly.

Has anyone else experienced this? It could be a design weakness in the firmware that controls the IR (insufficient hysteresis in the control loop). Or it could be a h/w defect in my camera.

The camera reports it has the latest firmware. The problem persists after power-cycling the camera.

You are likely very close. It tends to happen at the time that it is right at the threshold for night mode. A little more hysteresis would likely help.

BTW as a followup to my last post, I pulled up one of my cameras from last night when it switched to night mode. This camera is mounted to the underside of a roof beam on my garage and the IR illuminators light up the beam very well. Therefore, I figured that if any of my cameras would exhibit this behavior, this would be it. Nope. Went into night mode and stayed there. This capture was from a few seconds after it went into night mode, so you can see the illuminated beam. 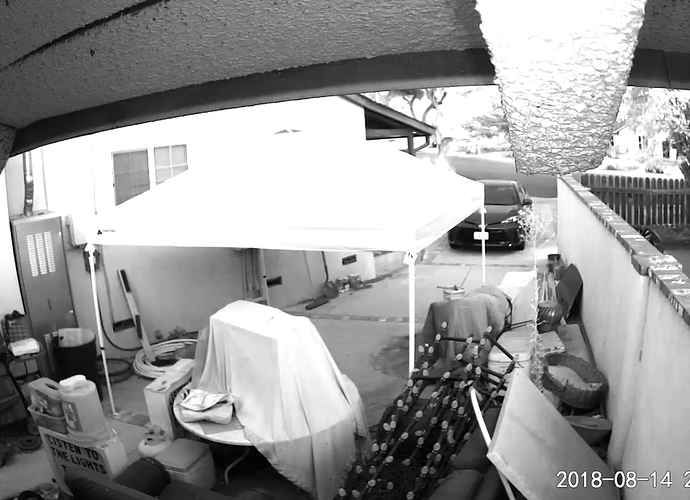 I thought the same thing (a nearby object could be reflecting a lot of IR right back at the camera and tricking the night vision algorithm). In my case, the cam is mounted on a wall with a fairly wide angle of unobstructed view. No other walls, posts, beams, etc nearby.

On the front of the V2 there’s a small round black plastic detail below the lens. I’ve always assumed that’s the aperture to the light sensor. Out of curiosity, I just covered it with a piece of black electrical tape. I assumed the camera would ‘gain-up’ the exposure, and then switch on Night Vision. But adding the tape made no difference whatsoever. I now think the round inset is purely cosmetic. Ditto for the tiny aperture just above the lens (covering it with tape is also a no-op). Perhaps Wyze did away with the dedicated light sensor component in the V2 hardware.

I believe that’s the microphone. The camera has a perfectly good light sensor - the camera itself. It should not need a separate light sensor.

According to the quick-start manual, the microphone is just below the lens, behind the tiny hole moulded into the bezel. The detail above the lens appears to have a clear plastic cover, as if it were the opening to a light sensor. The manual for the V1 design indicates the the upper detail is the light sensor. I suspect they dropped the h/w sensor from the V2 design as a cost-saving measure, and are using camera sensor just as you suggest.

The 1/4" round plastic insert below the main bezel is a mystery.

All of which to say that the odd behavior I’ve noted with the IR going on/off/on/off is not due to a faulty h/w light sensor, but a shortcoming in the firmware algorithm which decides when to enable/disable night vision mode.