How to view all cameras on a monitor?

8 seems to be my magic number on WiFi. Anything more than that and it gets all blinkey.

But, my greatest stability is at 3.

OK, as a test, I just tried a lot more than that via Wiz Live. Right now I have 26 cameras streaming and they are working well. Keep in mind that I have gigabit fiber here at the house and commercial grade WiFi (and the cameras are using 5 different access points.
I am clearly watching a spider web wiggle back and forth in front of one camera, and about a half dozen have either tree leaves moving or my front yard flags.

Yeah… I am nowhere near that. I have fiber but I’m one of those that refuses to pay for speed I don’t really need. I only subscribe to 200Mb with 8 on the router and 4 on an extender. 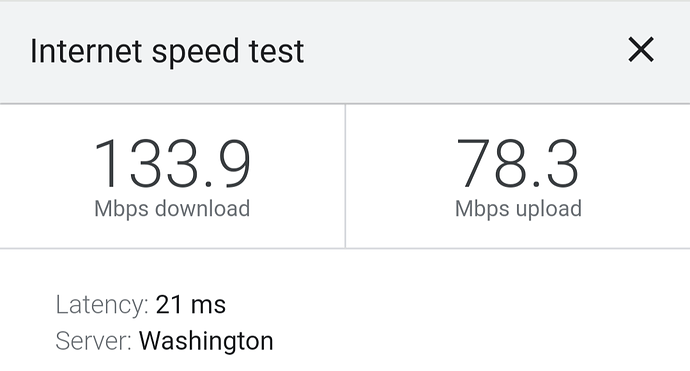 Maybe we should just say “YMMV”, but it probably doesn’t have much to do with Gigabit networking. Remember, these are 802.11n devices, which means they are relegated to a relatively slow network scheme.

More likely your device will determine how many cameras you can view at once. Remember the days of having low-end Android users check to see if hardware acceleration was engaged to eliminate jerkiness in the video playback?

For a quick idea of how networking might (or might not) come into play, read this thing I wrote awhile back. In short, it may depend on how much OTHER traffic you have on the network (or how slow or efficient your device hardware is, as mentioned above). So YMMV:

How To calculate bandwidth consumed by cameras Cameras

Many of today’s IoT devices only use the 2.4 GHz band of 802.11n, so a single-band single-stream N router is all you need for those. Wyze is no different. So Wyze cameras probably won’t drive router capabilities much. The exception to that is the number of devices allowed on the subnet. Many old routers falsely limited the number of devices, bringing a 256-address TCP/IP subnet down to 32 or fewer allowed devices. Today’s routers allow many m…

I use a Tp-Link Deco M9+ mesh system, two nodes, promoted as 100+ device capable, have maybe twenty-five devices total, probably 10-15 active at any time, average streaming and no other big bandwidth demands, 400/20 broadband, a lot of band competition from a dense multi-family neighborhood.

With BlueStacks Android 7 emulator on an amply equipped PC - which should exceed the processing power of any phone or tablet, I imagine…

I can do 4-up fluidly on tinyCam Pro with its settings at Main and Bitrate set at 120 KB/s. It’ll do 6-8 at times, but never rock solid for extended periods.

With the Deco mesh system, I’ve found over time that the logic that it claims to have to automatically fine tune connections does seem to work. But it doesn’t seem to retain it through cam reboots. * Must re-tune from scratch. So I don’t do the nightly cam reboots some recommend. It’s been rock solid for months.

The only things non-standard within the settings are that all cams are individually QOS prioritized. Each has a reserved address. And ‘beam forming’ is enabled.

Owned it for a couple of years and the three or four firmware updates seem to have improved it markedly.

* And definitely not through a router reboot.

That would be damn Auto SpellMangle. Intended to be the beta Wyze Live Web View. No, I am not using TinyCam,

Sorry to butt in like this, but what do you mean you use the Wyze app to group 4 cams together? How is this accomplished if you don’t mind.

what do you mean you use the Wyze app to group 4 cams together? How is this accomplished if you don’t mind.

On the Home tab of the Wyze app (what you are on when you first start the app), click the + symbol in the upper left corner. Then select “Add Device Group”. Then select “Camera Group”. On the camera Group screen, type in a name near the top and select the cameras that you want to be part of that group. Wehn completed, click on “Done” in the upper right corner.

Interesting, here’s some extras from the v1-v2 version of the help page:

Plus my two cents:

If you have four or more in a group, when you select the group and orient your device Landscape you’ll get a 4-up display, if you have six in the group, swiping left will show you the other two, and you can swipe back and forth between them at will.

You cannot simply use the ‘back’ button of the device to exit the group, however, without first changing orientation to Portrait.

In the 3rd party tinyCam app, when you are viewing a camera group, and tap a single cam in it, you are taken to a single-view (full screen if oriented Landscape), just like the Wyze app.

In tinyCam from the single-view, you can swipe left and right between single-views of the other cams in the group - not so with the Wyze app.

I’m so disappointed in @Sam_Bam, forsaking the very little Cam, the tinyCam, the product of a single individual, rugged rough & ready.

I think Sam_ may be a consultant to mega corps.

consultant? I ain’t that smart. I am just a dumb old redneck. And I feel a bit guilty here when I talk about my experience with other products. I am not offended if you want to talk about me. Just rolls off my old back.

And I only point to another product when the topic is looking for a feature that doesn’t exist or isn’t clear on the one for this forum. Am I wrong? Am I wrong to do that? If there’s even one moderator or maven that tells me to stop it, I will.

I could not figure out the server part of Tinycam. I could get it to display a couple of cams infrequently and the others that I worked on would not come up at all. It was just for fun, because I would like to have maybe two of ten up all the time. Most are just a different angle of the same geography.

I do like to try different stuff. I’d been through about 5 other brands of cameras before I stumbled across my first Wyze. I still have some Blinks just for fun, but seldom even look at what they record, since its easy to pull up my Wyze.

Just havin’ ya on, brother Sam.

I’ve been flogging tinyCam here for years, lobbied Wyze to merge the two co’s and apps in the early days, to no avail. They later hired Alexey, the developer, but his app remains his alone, AFAIK. It would be interesting to know what Alexey has contributed to the Wyze app, it’s much better than it was in many ways.

Peep was just gently poop stirring, I’m sure he didn’t mean anything.

Yeah, Wyze is way tolerant of discussing other ‘girlfriends’ (whatever attracts our canine wandering eyes.) I’d noticed Sam being super conscientious about doing so elsewhere on the board (holding back or inquiring if it was ok.)

It’s my opinion that Wyze wants above all to keep you talking. So they can listen intently ‘in the aggregate.’ So as to adapt and improve their sales and CS approaches. And the like.

I doubt there’s a jealous bone in its body - though it may pretend to be on occasion for our benefit.

Well, Thanks, @Customer for the comment. And @peepeep’s didn’t hurt my feelings. But he did make me think about how many times (and I don’t have a count) that I have explained another way to skin the cat.

And @peepeep’s didn’t hurt my feelings.

What? Is that; like an endurance joke? You heard it two weeks ago, and just laughed today, lol