I wanted to put a Wyze Outdoor Cam in our garage because that is where we get our Amazon packages delivered. I got it mounted today but when I tested it, it was having a hard time detecting motion. Is it because I have it mounted too high and I need more of the garage door in the PIR area?

The PIR zone works best when movement is horizontal across the field rather than coming head on. Is it possible to turn the camera?

Do you mean turn the camera sideways?

Watch this video and run through these troubleshooting things. How does your camera work compaired to that?

What @towelkingdom s recommendation was is similar to move the camera either the left side or the right side of the garage to catch movement side to side rather than coming directly at the camera.

I see what you are saying. The problem is that I am trying to record my garage for when Amazon delivers packages. If I do side to side I cannot record the whole garage. And if my car is in the garage I would be missing half of it.

I have some ideas that may help you. I can’t tell from the photo, but is the wco mounted right side up, or upside down? If it’s not already, I’d try mounting it in the same spot you have it now, but turn it upside down so that the pir area is at the top (and rotate the image 180 in advanced settings), like so: 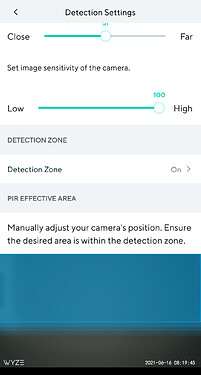 Then your approximate pir area will be: 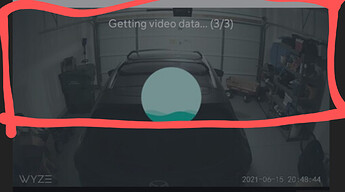 Instead of the lower 2/3rds. This may help your pir detect better if the car is in the garage.

Why did you go WCO instead of a v3 or v2? Do you have power at this location?

I do have power in the garage, I would just have to run a cable from the side of the garage to the spot I want the camera. We also have a toddler and baby, so I didn’t want them to have a cable they could pull or unplug. That is why I also have the outdoor cameras inside the house.

Gotcha. One thought was to try the pixel based detection system of the v2s and V3s, which need corded power, but sounds like you are pretty dialed in with the WCOs.