I have deployed a combination of Wyze Cam, Pan Cam, Outdoor Cam, door, and motion sensors on my property. I’m having trouble getting the rules set up so that I get useful video evidence when certain conditions are met.

For example, in my workshop I have 3 cameras, two motion sensors, and a door sensor. I also have an outdoor camera outside watching the fence row. Any time there is motion inside the workshop I would like to retain the previous 30 seconds from all of the cameras (including the outdoor one), up until 30 seconds after the motion stops. What is the best way to configure this? So far I’ve set the Wyze Motion sense when triggered to have the cameras upload a short video to the cloud. But if it even happens, it is ultra short. I have the Cam Plus thing that costs money per camera.

Right now the only thing that happens is when there is a loud noise, one of the cameras alerts me and uploads a 12 second clip. I don’t seem to have anything actually upload from the other cameras. I can go into individual cameras and use the ‘playback’ option to review certain times but it’s not sending clips to the cloud.

I also can’t figure out how to get the Outdoor camera to save video where people are detected. I had a knucklehead throw a mirror over my fence, which shattered to pieces. He also threw a large basket full of clothing over. Someone else kicked down a section of the fence and retrieved the clothing and basket. Unfortunately the camera stopped recording for the best parts! I have a short clip of someone approaching and throwing the stuff over but the clip stops just before his face is visible. Then when the next guy approaches, I have him approaching, talking, and looking down at the ground. Clip stops. 2 minutes later my fence is in pieces and I see his back as he picks up the clothing for a while. Clip stops. Next clip he’s walking away and I see the bottom half of his legs. I need the whole clip! I’ve got SD cards in these things so it should be able to write the full thing to SD card and upload what is necessary.

Sorry for the length… just looking for guidance on ideal setup to get useful data.

Any time there is motion inside the workshop I would like to retain the previous 30 seconds from all of the cameras (including the outdoor one), up until 30 seconds after the motion stops.

There is no “buffering” with these cameras, so any previous recordings will have to be recovered by you through playback in app or by removing the sd cards from the V2s or pans that you have where continuous recording is enabled.

If you have camplus, the cameras that have that enabled should be recording the entirety of an event and saving that to the cloud. Camplus for the WCO isn’t out for public yet, but should be soon. You can set up rules, so when one camera detects a sound, it can trigger a camera or a group of cameras to upload a short video to the cloud. Unfortunately this clip is only 12 secs, but you can go to playback in app for each camera and get more footage if you need it. 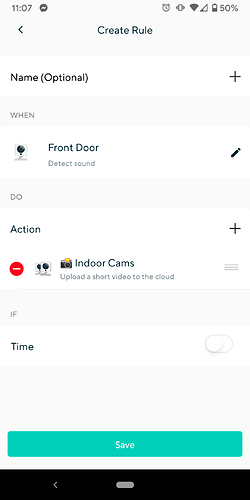 The WCO is its own animal because it’s a battery camera, and doesn’t detect motion or save footage in the same ways as the v2 or pan. It has a pir sensor that keeps the camera is a low battery usage state, then when movement is detected, wakes the camera up and saves a short clip. Like I said above, camplus is coming for this camera soon. Wco doesn’t have sound activation and doesn’t have Continuous recording like the previous cameras. It has scheduled recording, but this will suck battery down fairly fast.