Just happened to be live viewing my Wyze V3 and saw my first Geminid meteor. Meteor appears almost exactly at 3:57 am central this morning (12/11) on far right center side of screen.

The Geminid meteor shower event is just starting and will peak on Dec 13/14. Should be much more impressive than this solo meteor.

Get those V3s pointed up to the dark sky!

FYI. it’s rare for a meteor to trigger a motion event. Set your V3 for continuous recording. You can then scroll back through using the slider to check for meteors. If you are a true Wyze Starlight addict, pull the sd card and examine each minute by minute recording.

This is probably more information than you need, but it was cloudy when I went to bed. I got up to take care of some “business.” Wondered how it looked outside, so I checked live view for a few minutes, Was surprised the skies had cleared. Was even more surprised that I saw a meteor. Went back to sleep, only to find that the clouds had moved back in … and it looks like my viewing opportunities for the peak (Dec 13/14) are going to be lousy. But who knows. Can’t wait to see what others catch! The skies have to be clear somewhere!

Which direction do you have yours pointed? I did a overnight time lapse a few weeks ago but the moon ruined it.

@Ken.S Hi Ken! My V3 is pointed straight up, lying on its back. Oriented true N E S W with top of V3 screen to the north.

The V3 wiring is strung through holes in a heavy cast aluminum table (no shake in table from wind). see pix. Otherwise it would be impossible to put the V3 on its back due to hard wired pigtail.

V3 is plugged into heavy duty extension cord but I took care to wrap extension cord plug/Wyze plug junction in plastic and taped. The V3 plug is not waterproof so take care to protect it! If you look closely at the pix, you’ll see the white plastic wrap on the deck floor around the junction of the two plugs.

Wyze supposedly will soon be offering a waterproof plug as an accessory. I’m going to need three of them when they do! I’m addicted to having V3s outside, with a least one V3 dedicated to straight up into the dark night skies! @WyzeChao

As an extra step of precaution, because V3 is on its back, I placed a piece of electrical tape to prevent rain and condensation from running over sd card slot. That’s probably not necessary, because the sd card slot plug is pretty solid, but I’d rather be safe than sorry. And I know that putting the V3 flat on its back is an unnatural position.

The moon is not going to be bright soon. The Geminid meteor shower is going to peak on the night of December 13/14.

Up to 150 meteors per hour. It should be spectacular. Can’t wait to see what others catch

Hope this helps you 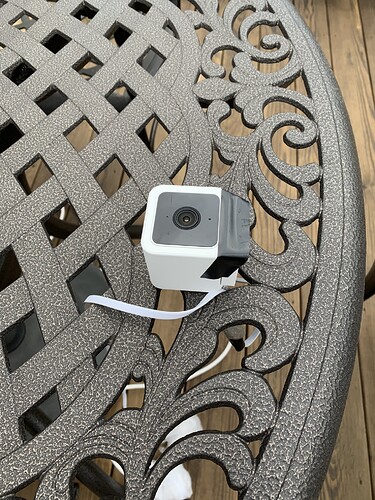 Nice, thanks for the info. Are you just reviewing the recorded video daily to see if you caught anything?

No. There’s not enough hours in the day to review the continuous recordings constantly.

I do “archive” my 32 gb SD cards to prevent overwriting for a few days, in case someone posts something spectacular.

Say for example, someone catches a bright meteor tonight at 11:30 p.m., I’ll be able to look on my pulled archive sd card to see if I captured it. Currently rotating three 32gb sd cards in and out.

This morning’s 4 am capture was completely a fluke, thanks to my bladder and frustration that it’s going to be cloudy here as we head towards the peak of the Geminid meteor shower event.

But to be honest, I’m really excited about what others are going to capture. I’m not sure if any of the Geminids will be bright enough to trip the Wyze V3’s motion event recording feature. A few of the Leonids were.

But most are going to be found by folks scrolling back through the continuous capture sd recordings.

Good luck! The Geminid event peaks in a couple of days. Hope you have clear skies and lots of meteor captures!

Okay folks, I need some help. I was sifting through my videos from the 9th and found what could be a meteor. But, it is a little early, 6:23 pm. It could be an aircraft, but it just a quick flash.
Any ideas?

Here is a photo of the object (circled): 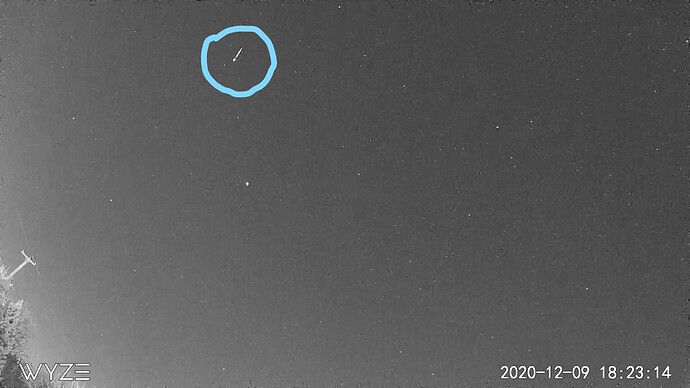