Feature and enhancements requests after 2 months!

First of all let me say I love Wyze Cams. I have 7 already and I’m planning to purchase a couple of those Wyze Cam Pans soon. After using them for a couple months now I do have some suggestions for improvement.

1.Ability to deactivate IR lights for night vision for those that point the cameras outside windows or use separate IR illuminators.

Thanks for the clarification!

Hermio, great suggestions! I agree with all of them.

Suggestion # 1 may be called “Behind Window” mode, i.e. IR LEDs turned off and IR filter disabled. This will enable putting more cameras behind windows with good night videos.

Attached picture shows how I mounted a V2 outside. So far so good. Painted the V2 black with black permanent marker to make it less visible. 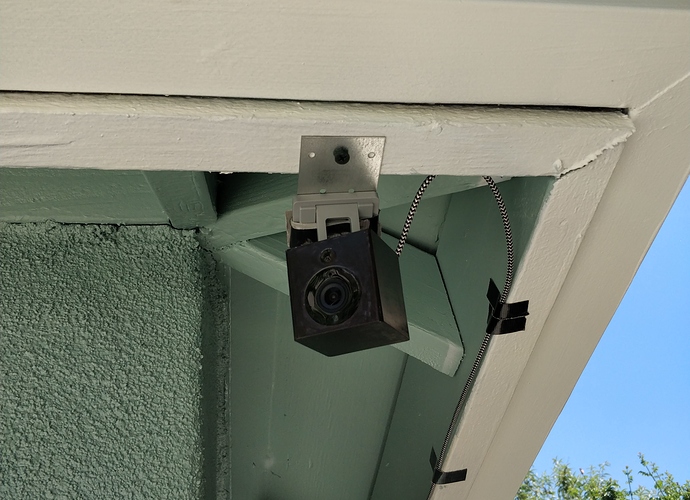 catcat… To clarify something about #1: The ability to keep both the IR LEDs and IR filter disabled already exists. If you tap the crescent moon icon above the live stream, night vision will rotate among On, Off and Auto. In Off mode, both IR filter and lights are disabled. This setting can also be adjusted by tapping the gear icon, then Advanced Settings.

What the Hermit is asking for is the ability to have the IR filter ON but the LEDs OFF. This is possible in firmware and is on the development roadmap, but no target date has been set for implementation.

I agree the detection zone is a major drawback of the WYZECAM cameras, I’m going to have to buy two of a different brand because of the layout on the front of my house doesn’t get the proper coverage with the V2, to fit my needs the four points of the zone need to move independently or better yet a couple more independent points added.

Like the black version! There’s a guy somewhere here that also sells matte black wraps for them too.

I’m going to clarify terminology, because of what your definition of IR filter Off means. You are describing IR Filter on vs off opposite from what I would describe it. The IR filter is an optical filter that blocks IR light. When operating in daylight (either Night Vision mode manually turned off or in Auto with lots of light), the IR filter is in the light path, and therefore really should be described as ON, however the IR illuminators are turned OFF. When operating in Night Vision mode (either Night Vision manually turned on or in Auto with little or no light) the IR filter is removed from the light path, so it should be described as OFF, and the IR illuminators are ON. In your last paragraph, you correctly describe the desired result for “window mode” using your version of the terminology.

I do some technical writing as part of my job, so this kind of terminology issue sometimes drives me nuts!

Correction accepted. I should have said “IR filter removal disabled”.

Just popping in to say I am also in agreement with the freehand motion zones. Due to mounting location I’m catching the road diagonally across the camera’s FOV so the square/rectangular zone doesn’t help much.