I have had a Wyze doorbell for several weeks and haven’t had any issues. Yesterday, I just received the Wyze color bulbs. I created a device trigger that when the doorbell detects motion, it should turn on our front porch light bulb. It will not work. I have setup this same trigger event for a v2 and v3 camera and the light bulb successfully turns on, so it has to be something with the doorbell.

Each time I test, I delete the rule and re-enter it. I have also deleted the app cache.

Has anyone else had issues with this? Am I missing something?

Does “rule history” say the rule ran and was “unsucessfull”? Or is there no record of the rule being ran? Can you post a screenshot of the rule?

Thanks for your reply. There is no record of the action running for the doorbell. When I ran the same action but utilized the v2 or v3 camera, it ran successfully and there was a record of it.

Screenshot below. I kept it simple because I was just trying to get it to work. 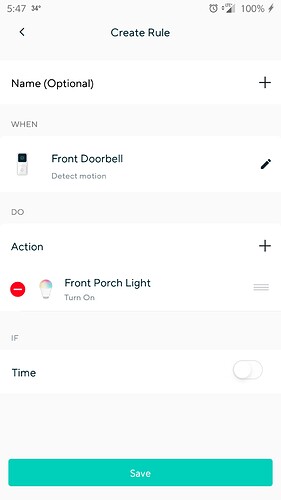 Can confirm, same experience here. The trigger when the doorbell is pressed works to turn on a bulb, but motion detect doesn’t trigger an equivalent rule.

That’s weird that you are not getting at least the other cam’s notification on your watch since me and @ j2y2572 are. I would definitely reach out to tech support after you first log out of the wyze app, uninstall it, reboot the phone and watch and then reinstall the app and log back in.

Could also be related?

I just tested this again tonight and it works now. I set my color bulb to turn when motion is detected on the doorbell. I haven’t tested this the last couple days, but I did just update the firmware for the color bulbs.

Glad this is working for you now. My doorbell mysteriously stopped working completely and I wasn’t sure if it was the transformer or the doorbell but I just opted to return while I still could through Amazon.