What causes this distortion?!

Videos show me changing night vision between on, off, and auto at varying times before and after sunrise for comparative troubleshooting. 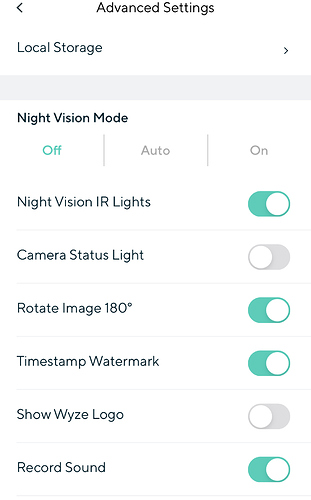 You need to more specific? What do you feel is distorted? It looks like you have the night vision on but the IR lights off?

Is the “distortion” in each video? Just looks like the NV mode is “on” making things be black and white for most the videos. I keep looking for compression artifacting tyoe issues but don’t think I am seeing any in any of the vids.

Added more videos. Look at the throbbing and bleeding of green and red around the cars. The distortion is immediately visible in each black and white and color videos, quite easily if you watch any of the videos fullscreen on a computer, or at least full screen on an iPad or even a smaller iPhone/Android phone.

That’s an sensor artifact, worsened by having night vision mode turned off and your IR emitters turned on. Remember these are very inexpensive sensors.

In any event the “distortion” is actually very minor and to be expected at this price level.

Please demonstrate video proof that the “very minor” issue of not being able to see anything at night is universal to all cameras, or at least to Wyze and your much more expensive Arlo or Nest. Thanks.

With the settings you showed you will not see anything at night. You turned night vision off. With it set like that of course you can’t see anything.

If you would like I will duplicate your settings tonight and upload the resulting video for “proof”. 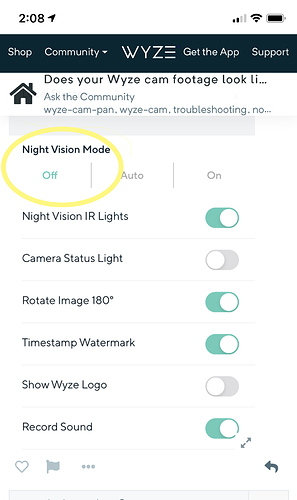 Incorrect. You’ll need to read my initial post text before reviewing all my videos, not merely my screenshot of the settings.

Please read my initial post text before reviewing all my videos, not merely my screenshot of the settings. Thanks!

As you would say, incorrect, I have re read your post. If you believe you have a defective unit then contact support.

We are all users and volunteers just like you here. So if you don’t feel we are helpful your best bet is to contact Wyze’s excellent support staff. They will fix you right up.

Just for giggles here are some screenshots “proof” as asked.

Night Vision and IR lights on.

Night Vision off, IR lights on

I did read the initial post, which only mentioned “distortion” and no further details about where or what you were seeing. I did view each video multiple times, on various screen sized devices and I see several videos in night vision mode and the frame exposed in different levels due to different times of the sunrise. The only thing within distance of the porch light is the iron work on the left side of the frame. Most the rest of the frame is farther away and is very underexposed. The vehicle in some of the videos appears to be illuminated by an external light source, but do to the low illumination of that object and the general not good unassisted low light performace of these cameras, looks pretty grainy. In your follow up post where you go into more detail about the distortion being green and red that you see around the vehicle, I looked multiple times and don’t see it on either the black and white videos or the low light color videos. I just see the camera trying to do it’s best in a fairly low light condition.

The only thing I note is the first few frames of the first 2 second video that show a green and pink full screen mess that folks have experienced before. Screen shot below: 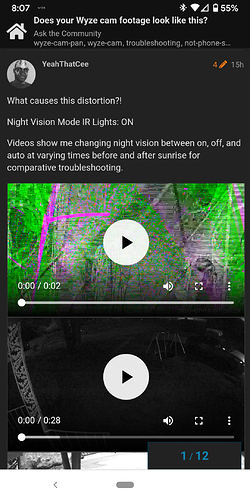 Thank you for your detailed analysis and for acknowledging a hardware problem as something other than a minor one. It’s incredibly disingenuous for others without any relationship to Wyze to suggest that the night vision on cams universally requires lots of artificial light or sunlight, ideally during the day. What? Or to make things worse, send static SCREENSHOTS to justify this absurd defense for a motion VIDEO camera. So thank you for your thoughtful examination rather than an attempt to ignore a customer’s problem.

Wyze was, well, wise to promote this “community forum” as primarily member-to-member interactions, because I suspect that otherwise, these random and often rude responses would lose Wyze customers. Wyze Quality Assurance or other customer-facing roles could quickly generate database results that show how many customers delete their accounts, never return or post to the forum, or buy products based on their interactions with others or specific people in this forum. They’d be amazed at what they found to the point of banning some people.

With that said, I’ll decide whether to escalate my hardware problem to Wyze Support, treat Wyze cams like disposable contact lenses by replacing them with new ones, or buy future cameras elsewhere. I currently have five Wyze years-old cams experiencing “very minor” decline. So it’s a more significant decision whether to consider this an ongoing fun, inexpensive experiment for myself, whether I need to redirect my investment into a different camera ecosystem altogether, or even mix-and-match. So it’s not a good idea for others to subtly suggest that those who report problems shut-up because everything’s fine. Your response style is a welcome reprieve from that. So thank you once again. I have some decisions to make, so I’ll mark your response “solved” and bid my post a fond adieu.

[mod edit] I made no such claims. Enjoy your day. I have no further information to impart.

So this was a complaint that the Wyzecams can’t see in the dark without some kind of electromagnetic radiation present. Um, okay.

The Auto mode generally seems to do its job and I think we can all live with the very temporary artifacts as it transitions.

I’m not looking forward to the death of the sensors but that doesn’t seem to be the case here?

Agreed. His statements kept changing as I addressed any particular point. To be honest it was confusing. Would love to help but apparently we don’t speak the same language?

However if he feels he has an defective unit I maintain his best path is contacting Wyze support. He will get sympathy here certainly but typically Wyze requires returns to go through support.

Wow I just re-read some of what I skimmed before. Saying users should be banned from the forum for offering help and asking clarifying questions?? Wow. A years old $25 camera, or a dozen of them, getting ANY kind of replacement support for free is pretty remarkable.

I think he is frustrated and looking for, ah, something? Validation maybe? Anyway I certainly sympathize but apparently am unable to communicate constructively? Not sure but someone else may be able to help.

To me, the night vision performance above looks on par with how my personal cameras perform, and what I’ve seen with the many video comparison examples of what other users have posted here on the forums seeking help with night vision/“why doesn’t my IR illuminate ____”/what are these orbs?/omg bugs!/etc type issues. I don’t think the issue is a hardware defect but rather a hardware limitation when it comes to dealing with low light level or night vision performance. I feel bad when folks don’t get the performace they want, or need.

Seperatetly, to comment again on the green and pink psychedelic party in an above screen shot, I believe that is a hardware or software issue, that I can’t explain. I JUST experienced that myself. When attempting to view the camera, the loading screen shows this (this is a previous screen shot but it just happened again): 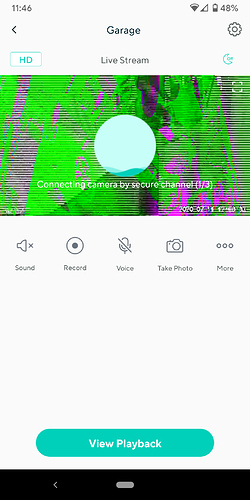 Screenshot_20200712-1146551080×2160 487 KB
That camera of mine is set to record events only for local storage. There has been no motion in my garage since I left this morning but just now a one minute clip was saved to SD. Looking at that one minute in playback, it studders, misses a few seconds and has the same or similar green and pink splash a few times for only a few frames. I let it play, and once that one minute ended, it stopped and displayed that I have no video saved from January 2038. Sweet. That is a defect of some level. 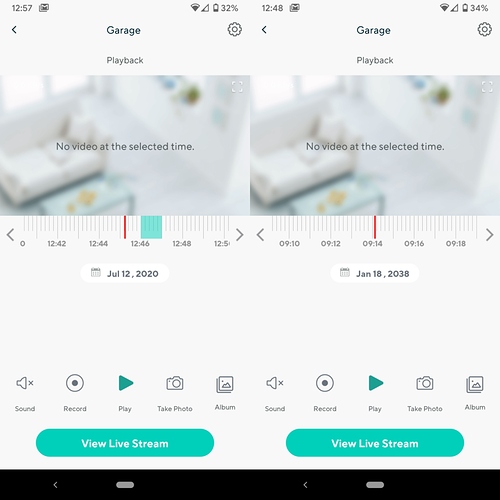