I assume it would be easy enough to turn on a Wyze Plug after a contact sensor trips so turning on a siren (connected to the plug) is easy.

But then you are faced with turning off the siren after a delay 5 or 10 minutes, in case of false actuation or say if you are not home and you don’t want the neighbors to hear the siren 24/7.

IFTTT is too unreliable for the job.

Maybe one of the motion sensors at the same time? If no motion for 5 minutes then turn off wyze plug? As a backup? I think it will do that in the device triggers area. I dont have my sense contacts hooked up at the moment so I cant test it.

@john1in2 Welcome to the Wyze community! I use both Wyze motion sensors and contact sensors to trigger lights and my Wyze plugs. Using the rules, you can have the Wyze plug turn on when motion is detected. You have the option to set x amount of time for the plug to turn off. One example, I have one of my Wyze plugs to turn off in 3 minutes after motion stops and the sensor is clear.

Amazon has a few sirens available that would work with the Wyze plug. The power supply has to be purchased separately. 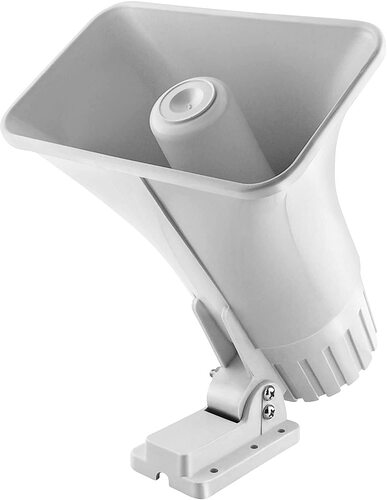 Ok, I recieved my Wyze plugs and indeed it can be done though I don’t think the examples above are quite correct in the details.

You can go into “schedules and automations” on the app, click +, add a When event “device trigger” . This can trigger on motion or contacts etc… and then you can add a Do “Action” and turn on the plug. While you can then modify this it is only by days of the week (schedule) and there is no ability to turn off the plug after a certain amount of time.

However you can create second schedules and automations rule for the plug. You can select “When” Device Trigger the plug “has been on for” —insert time say 2 minutes it triggers.

Then your Do “Action” is to turn off the plug.

In this manner the plug is never going to be on for more than 2 minutes at a time.

Of course it could be triggered again right after it turns off but with contact sensors that is very unlikely— with motion sensors yes you may have a problem if there are false alarms.

This could work very nicely for a siren or motion activated light on your front door. Something the IFTTT community is having a hard time with but Wyze appears to be on the ball since it tracks on/off time. Lucky us.

there is no ability to turn off the plug after a certain amount of time.

You actually can turn off the plug after a certain amount of time. Select trigger (Has been clear for) in my case, three minutes. Delayed off is easily accomplished.

As soon as motion is detected, the alarm would turn on and I assure you an intruder would be looking for the fastest way out.

This works with contact sensors as well and all this can be accomplished without using IFTTT.

However, I chose not to use contact sensors because if the door was left open the alarm would never turn off until someone closed it to trigger the plug off. You would have the same problem if the contact sensor was on a window.

But again, my use case may not work the way you would prefer. 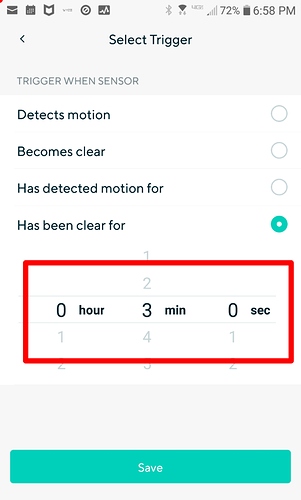 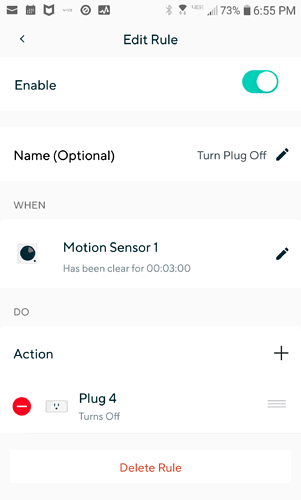 BlockquoteYou actually can turn off the plug after a certain amount of time. Select trigger (Has been clear for) in my case, three minutes. Delayed off is easily accomplished.

Trigger>>has been clear for>>
Technically this has nothing to do with turning off the plug after a certain amount of time, or how long the Plug has been turned on. Instead of relating to the plug it relates to the sensor.

So if people are running around your house all night, your motion sensor activated alarm would never clear, even after 3 minutes.

On my example the alarm would turn off after 2 minutes and then be re-triggered when motion was detected again.

A subtle but significant difference depending on sensors and what you are trying to do.

For example if you had this all set up to actuate a light on your front door when motion was detected, the two systems would behave very differently in the case of bugs/moths tripping the sensor.

But again, my use case may not work the way you would prefer.

My motion sensor isn’t outside. I know that wouldn’t work.

If this suggestion doesn’t work for you it’s perfectly understood.