Did person detection stop working for anyone else?

Person detection quit working for me and the ability to activate it also disappeared from the app.

Maybe during system updates the engineers forgot to include us legacy subscribers in the list of those who should be provided the service.

Did you try to log out of app then back in,I see it on my cam plus and

I had the same problem with my Cam V2 last week. It appears Wyze deactivated motion detection on my camera with a firmware change recently. I resolved this issue by rolling back to an older firmware version. See my post in
no-person-detection-no-motion-detection

Thanks for the reply!
I reset the camera and voilà, person detection magically reappeared with the notation that it’s a legacy app or feature!

Tried to send you a screen shot but Wyze forum won’t let me, giving the reason as:

Sorry, new users can only put one embedded media item in a post.

I had the same problem with my Cam V2 last week. It appears Wyze deactivated motion detection on my camera with a firmware change recently. I resolved this issue by rolling back to an older firmware version. See my post in
no-person-detection-no-motion-detection

My person detection hasn’t worked for a week or so. Have tried resetting everything but no luck. Everything records as motion, but with cars driving by it doesn’t do me much good. I really only want to look at videos of people, and don’t want to scroll through hundreds of motions. The green box does outline me when I step outside, but the video will no longer tag me.

What camera ? I have a V3 in front of my house and it just recorded me “Person” walking by my “Vehicle”.
The only choice you have is selecting notifications. On a V3 it is under Events recording it has :: Detects motion, Detects Sound and Cam Plus AI Detection. Tap the Cam Plus AI Detection and just chose Person.

Just to add that I am experiencing this as well. For the last two weeks or so, person detection rarely works. This is on a v3 with CamPlus and a Pan v2 with legacy detection.

I’ve been submitting the missed person detection videos to help Wyze AI but things have not improved.

We’re missing detection for packages being dropped off and DoorDash deliveries at various times of day.

Mine: Make sure your filters are correct. 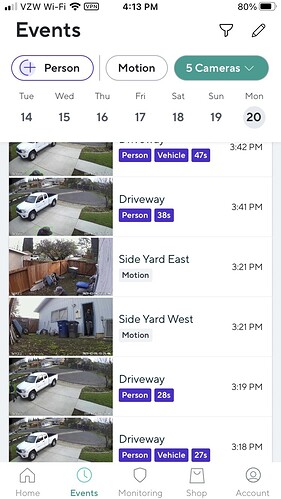 Un plug the camera and plug it back,and signout of your app

I have a V3. Person detection has worked for months, but stopped a week ago. It’s the only way I can weed my way through junk videos (cars, wind, etc.). I’ve tried a few tips from other posters but nothing has worked.

I don’t know what else to tell you except as mentioned turn it off and back on. Maybe force close your app and open again and check your Cam Plus AI settings again.

I’ve unplugged, rebooted, logged out/in, checked settings, etc. Motion is recording fine. I can stand in front of the camera and it outlines me but it will not tag me as a person. But I just tried on last thing: I turned off the detection zone, and voila…it worked. During my testing I changed the zone multiple times but it never made a difference; killing it entirely did. That’s too bad as I’ve always blocked out a bit of the perimeter so that trees blowing in the wind wouldn’t trigger a recording, but after many days I guess I’m happy to have person detection back on.

Same. Tried all of those things. Motion IS detected, but it’s just not detected as a person/package/vehicle/pet. Alexa doesn’t announce that a person has been detected.