None of my routines came on today so I looked in my Alexa app and all my Wyze devices say they are offline … Is something going on with Wyze? All of my other devices are fine. 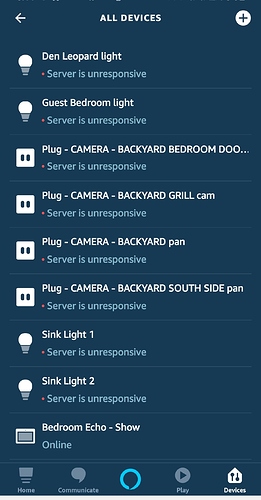 I’m not aware of any issues, and haven’t seen any other posts here, or on the FB group. Have you tried re-enabling the Wyze skill?

Well they are working now and the error message is gone now. But it caused it to miss their scheduled routines. I have plugs by Wyze and three other companies, the Wyze Plugs AND bulbs are the only ones that this happened with.

I had a problem too , early morning after I restarted router, some cameras didn’t come back online had to power cycle them, bulbs were not working right, I had to fix Alexa too , today everything is working fine.
My oldest camera , one that I have never had to power cycle for anything, I had to

@HDRock are you on the Beta app? I am on Beta for Android because of the lag issue with the recent update.

Pretty sure the app had nothing to do with it at all, I have 3 different devices running 3 different app versions I think it was as a server glitch .
Maybe an alien craft flying by

I also had this issue early this morning, it looks as though Alexa was on break for a bit but was fine a short while after. For sure seems like an Amazon problem Because the Cams showed up and were working fine with-in the Wyze app.

Hi @sidneyhsimon,
If you changed your router, you may want to be sure that your devices are set up on the new router, SSID, username and password etc.

EDIT: Also of course making sure the 2.4ghz band is enabled and what they are trying to connect to
(Sorry if you already checked this, just some basics I was thinking about)

Also if you have not already, You may want to “re-pair” the devices with the new router.

All other devices worked immediately as new router has same wi-fi username and password; thought there may be a method to reconnect to the camera but haven’t found a connection feature; perhaps the camera should be removed and start over with the installation and give it a different name?

That’s what i would do, remove them then re- pair them and you should be good to go, I don’t think you have to rename anything, just complete the " initial set up " wit the cams again.

Just in case anyone else is watching this, I did remove the device from the app, and installed it again, same as the initial time, and all is working fine now.