Customizable notification messages so sensors can be used for more non traditional uses and still give good context. I would like to change the notification in this example Wyze sensor doorbell hack - YouTube

Hi @lachlan6, could you explain a little more what you mean by customization in this context? Are you trying to change the title of the customization? If so, could you give the sensor a meaningful name (eg Doorbell) that will pop up in the notification? Or would something like discussed in the topic below satisfy this?

Siren > Device Trigger Rule > needs Notification Sent, Recording marked and should Ring or Siren on your phone
lachlan6 May 3, 2019, 3:39pm #3

So currently everything for the sensor is just “name of sensor” is open or is closed. I placed one in my doorbell chime and I named it doorbell. When someone rings my doorbell I get the notification saying “doorbell is closed” I would like to be able to have it say “someone is at the door” or “ding dong”. Other examples would be the guy that put it on his washing machine he could have the notification text be “laundry is done!” Or I made a water sensor and it could say “Alert!!! Leak detected under kitchen sink” it really isn’t a huge deal I think naming them gives you enough flexibility to know what is going on but it always just reads funny with “is closed” after it.

For android devices I’ve been using IFTTT to send custom text for the different Wyze sense notifications. Then use app Out Loud that can speak the notification text. I’ve also been using the spoken notifications to issue commands to my Google Home speakers. It’s clunky and not a perfect solution, but it’s been fun to experiment with.

Alarm or horn that might work with Sense? Sensors

Wyze Sense initial integration with IFTTT is now available. Applets can be created for IF the Wyze Contact Sensor opens or closes THEN do “something”. Or If the Motion Sensor detects motion or becomes clear THEN do “something”. For android devices I’ve been testing the do “something” as sending a notification to the android device with message like “Motion detected in basement”. There is an app Out Loud that can speak notifications. Out Loud is free for one app which could be IFTTT or it could …

I use IFTTT for a few of my projects when i have to but i like to avoid the middle man when i can. I have also noticed a pretty good delay in IFTTT. Wyze notifications are really quick i would hate to lose the speed and reliability for style.

Agreed. IFTTT notifications can definitely be slow sometimes and it’s good to limit the number of things involved for speed considerations and to limit possible failure points. So far the IFTTT notification timing hasn’t been bad with the sensors and it’s just cool to hear the spoken notifications. Hopefully your request to customize notifications will be something Wyze considers for future development. Some type of integrated chime/siren option (external or software) would also be great.

@lachlan6, I’ve moved this topic to #wishlist so you and others can vote for it. Be sure to click the VOTE topic at the top.

I’d like to suggest Wyze include support for Android’s Notification Channels. This would allow users to set different notification sounds / behaviours for different Wyze products and notifications.

For example - I’d like to allow my Wyze Sense contact sensors to alert me of a door is opened, even if my phone is in Do Not Disturb mode at night. Notification Channels would allow this level of granular control and customisation to prioritize and distinguish various Wyze notifications. 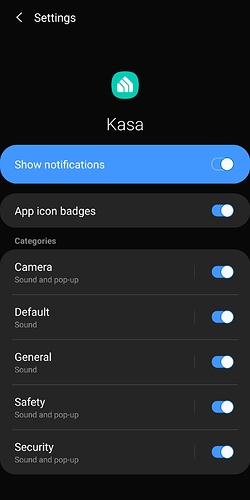 This would be great! Not all notifications are of the same urgency. I want certain notifications to wake me up in the middle of the night

Please consider adding code to phone app that will allow configuration of Wyze App notifications as an “exception” in Do Not Disturb. Running Android 10.

Do Not Disturb allows me to turn of sounds for phone calls, etc, while sleeping. Some people want Do Not Disturb to automatically block Wyze notifications. I can understand why that might be helpful. I desire to let Person Detection notifications through as exceptions to the Do Not Disturb. For my purposes, I have the cameras so that I have advance notice of undesirable activities. Those are more likely to happen at night. Need to have Wyze App interact with Do Not Disturb exceptions. The Do Not Disturb in the Android Software has options to configure different apps. Wyze app doesn’t show up in the list for possible exception. It would be great to be “configurable” for users who want it “blocked” when DND is on and “open” for those who want notifications even when DND is on.

Under Android 10, go into Android Settings > Apps instead of Do Not Disturb settings:

Android Settings > Apps > Wyze > Notifications > click on the word “WyzeMessage” instead of the toggle switch > scroll down to the bottom and toggle on “Ignore Do not disturb”.

Thanks for the help. Much appreciated.

No prob… glad to be of help.

I’ve been using the (I don’t know if beta) feature for detecting packages and not only person detection. It works pretty well!! What I would like is that in Android you can add different channels for notifications so you can customize each one. For example set to a silent notification if it is only a person but if it is a package, I want it to alert me, even if on not disturb mode.

It would be amazing and be a better customer experience!

I just installed a Wyze Doorbell and I am yearning for Android Notification Channels. I want to be able to have a different sound for doorbell presses versus camera motion. You could go all in and have a different channel for each type of Wyze AI notification as well.

I need this too. I have 10 cameras and notifications are so overwhelming that I have em all turned off, but I NEED TO KNOW about some events in real time, even in DND and need to customize down to specific devices and specific events.

I have both Ring and Wyze doorbell. I really like one feature in Ring that’s missing in Wyze. Whenever there is a motion detected or a person ring the doorbell, I have the flexibility to select which notification sound. For example, for motion I select ‘Motion at your door’ voice and for ringing the doorbell, it would say ‘Someone at your Ring Doorbell’ from the cellphone. This way, it obvious alert me on people around my front door. Currently Wyze only support system notification sound which is like any other app, but if you get a lot of notification alert sound like from message, then you get used to it, so wouldn’t be alert on anyone at the front door. I just wish there is a way to differentiate WYZE alert and other app alert sound (or at least I could choose other notification sound from the system provided notification sound.). I am waiting for this feature so that I would subscribe the cam plus. Thanks for the hard work!

Needs custom app alert notifications to be configured within the app. For example, a video motion capture will have a specific sound notification and app push setting. Samsung One UI (Android, and android in-general) does not allow us to set custom app notifications for any apps, let alone Wyze…Wyze simply inherits the phones default notification settings, so all of my critical Wyze Alerts just get drowned-out by all other notifications on my phone. Add this feature to your app, Wyze Devs! Its really not hard to do! If you want, you can hire me and I’ll have it done in about 1 day. This is basic app 101 programming to include android notifications so Im honestly shocked and annoyed that people have been complaining about this issue for years if you search Google, and that this hasnt been addressed yet. I dont know if there arent enough Devs at Wyze to keep the lights on, or if you folks spend all your time on AI functionality…but basic app notifications should be considered part of critical product functionality since many of us use our cameras as part of our overall security plan.