It would be nice if we could draw more than just a square.

It would also be nice to create different rooms manually. This way it wouldn’t distort a current accurate map when you, for example, move the vacuum from downstairs to upstairs.

Your second request is found here.

Another thing that is missing from robot vacuums that have a mapping feature is the ability to manually adjust the map. I have noticed that the robot vacuums that use lidar do a really good job at mapping but there are circumstances that make the vacuum miss areas because they are obscured and those areas can be very difficult to add to most vacuums since with most vacuums the map is created and never updated. A dead area stays a dead area because something has fooled the vacuum.

Agreed. The vacuum had placed the rooms incorrectly. It’s given my bedroom half of the hallway, and the half it’s placed inside the living room with the bathroom. My Roborock correctly divided the room the first time and allows me to adjust the positions.
I think the robot is good but was released before the app was ready.
Any idea when they will improve the app? 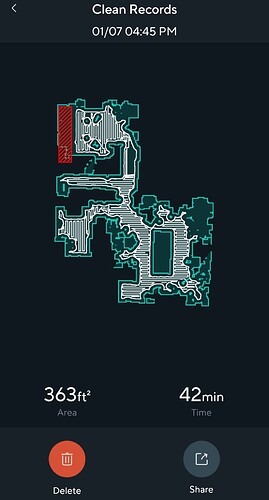 Agree with editing virtual walls. Right now they cannot be angled in any way, just square/rectangular, but objects are not designed in those shapes. Also, my map is on a 45 degree angle so rectangular boxes do not work for any area. Need further flexibility.

That Roborock map looks nicer than the wyze robot map… It also has an angled virtual wall! Just curious…why did you decide to get a wyze robot instead of another Roborock?

I wanted to try it. I’ve generally been very happy with Wyze products and how reasonably priced they are. I know in time they will improve the app and experience. They do plan on charging 250 for it, so they need to improve the software to make it competitive with other robot vacuums in it’s price range. ie: ilife 360 etc… But, so far, I think Roborocks are the pinnacle of robot vacs out there.

In addition to this, I would like them to take out the “buffer” they have around the virtual walls right now and just show where the virtual wall actually goes to. For example (not sure if Roborock is the same), but with my old Ecovacs Deebot, I could look at my house and find the corresponding area…pretty much down to within a few inches and the vacuum would go right up next to it. WIth the WYZE Vacuum, I can put the virtual wall, and it obeys it, but there’s a buffer around it where the vacuum won’t go. I made it work by shrinking the virtual wall little by little until the vacuum went where I wanted, but all this math I’m guessing at could totally just be done in the app by calculating where the virtual boundary is at. I mean, the vacuum already knows where it shouldn’t go, the UI really just needs to be updated to reflect that in the app.

Yes, I want to put virtual walls around a diagonal piece of furniture, but the wall needs to rotate… 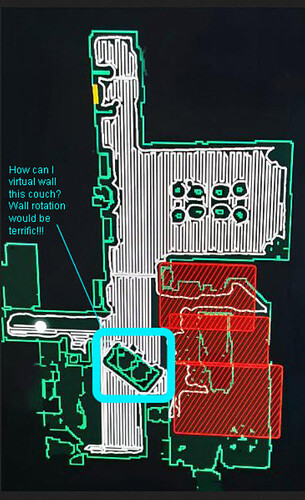 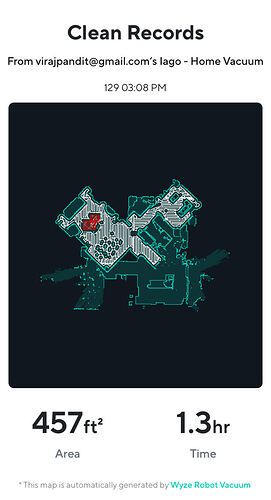 WyzeRobotMapTilted640×1180 74.8 KB
This is another example. I want to add an idea that is very relevant.
The map is simply tilted. I think if the map remembers approximate distances and smartly analyzes against saved maps’ dimensions, such skews can easily be avoided; especially considering the walls don’t move and that Wyze uses Laser which can be very accurate in calculating distances and angles…
3 Likes
wyzoCam February 12, 2021, 5:42pm #11

Neato robots allow you to draw “no-go” lines at any angle, and connect the lines into any polygon shape. Please consider a similar feature.

I would like diagonal no-go areas too. Meanwhile, I use several small overlapping rectangles to approximate a diagonal to avoid an entry-area towel we keep on the floor for the dog.

In the OPs case, the couch is mapped and avoided automatically, so I’m not sure why a no-go area is needed.