Can't show my cameras on my Google Nest Hub

Sorry but I’m not sure what you’re suggesting that I try again. There isn’t a clear process outlined in this thread to resolve the issue - seems like the v3 just works for some people and doesn’t work for others, regardless of what they try to do to fix it.

I meant can you try to stream the v3 again to the nest hub and are you still experiencing an issue?

Yes, I get the same issue every time I try it. I restarted the camera and the Nest but still no luck. The camera and Hub are on their latest firmware.

I also have same issue 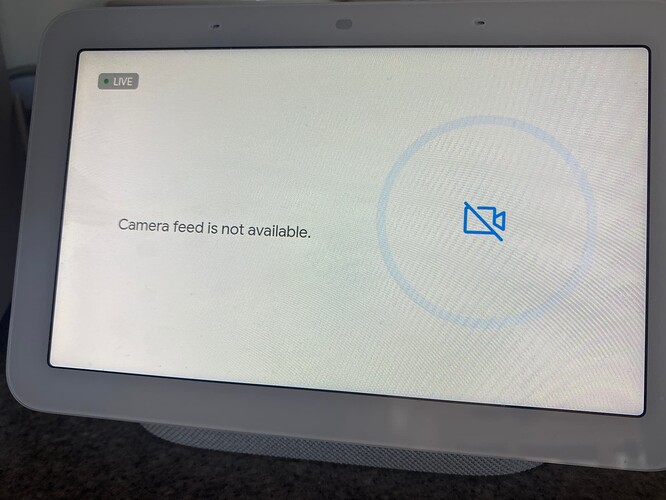 My v3 works but my v2 doesn’t. Any updates on this issue?

Same problem here with latest firmwares. Camera randomly do have a feed in Google hub but most of the time they don’t. I do nothing (such as a reboot or firmware upgrade or else) to have them working. Wyze cam + Google hub combo has a mind of its own. Pretty useless in my opinion. At least video feed through Wyze app works.

I get the feeling that this is not even considered an issue by wyze because it has gone on for so long. There is no problem when using wyzecam software, but Google hub sucks. It works sporadically.

I’m having the same issue all of a sudden. This all worked fine for a few days now and this is my baby monitor. Removed the device and readded it to the Google home app and nothing still. All it does is show that the camera feed is not available after I have to hit the live feed button when telling it to show the camera or selecting it. Huge problem at the wrong time. Luckily it works on my phone, but this is going to be a return if this doesn’t work. This was the reason I bought this camera.

Hello there … I just purchased the v3 and it seems to work with no problem what so ever … But … v2 still will not show on the google hub … Still trying to figure out what I have to do in order to get to show on the hub… If I do,I will let all know what I had to do to overcome this hurdle …
October 25 2022 …Update
Well the one cam(v2) still showing "CAMERA FEED IS NOT AVAILABLE … Before it would show a dark screen with :(green) do and the word right next to it “LIVE” and then it will show CAMERA FEED NOT AVAILABLE … still trying …

A couple months ago I had no issues streaming my v2 or v3 cameras to my Nest Hub. Just tried today, and none of them work - “camera feed is not available”. Everything is fine in the Wyze app, and the cameras are still listed correctly in the Google Home app.

Anyone found a fix?

EDIT: Just noticed that I can ask the Hub to show the camera on a different Chromecast device (Google TV), and that works fine.

I have the same issue. It was working for a few hours at a time a few days ago, now works for about 2 minutes, then I get the camera feed not available message. This is completely unacceptable. The response from wyze is always the same of doing a reset. How many times do I have to reset the device to confirm it isn’t working as advertised.

Having the issue too mine says “playing wyze-cam” then goes to the wyze-cam in the center of the screen. Come on support

Same issue with mine. Says “Playing Wyze Cam” but it only shows a blank screen. Using regular sized Nest Hub