Can’t take photos with one camera, but it takes videos

That gives me an idea on mine. I think I’ll take it outside where I have external IR lights and try it. So far I’ve just used it indoors. I’m still thinking it something in the little solenoid that actually moves the filter back and forth. Like maybe it’s just crapped out!

Man- this just gets weirder. Amazon just delivered a brand new shiny cam and HE card. I installed it, Sans the Sandisk (ouch). While I was formatting the card ( same program you said you use, BTW), I tried taking photos. It would not take a photo except on night vision. When the card finished formatting I installed it and tried again. Now, with no other changes, reboots, etc it is taking photos just fine.

It seems to be intermittent on my end. I think I only saw it on the one camera because that was the only one I normally used the function on.

But yesterday I hit all 10 cameras about once an hour to try. I had about 50% success rate. Every single camera failed at least once during the day, and every camera worked at least once. I can’t seem to find a common cause. Frustrating!

The ones of mine that I’ve tried this morning are all working fine, pans and V2. Tried each one switching modes several times around and all worked.
I’m going to flag this thread and see if they will kick it to a Wyze Guru. . I think a tech support ticket will just be viewed as an individual situation and this obviously isn’t.

I just want to point out that this should not have anything to do with the SD card or the night vision mode. The Take Photo button saves a still from the live stream to the local Wyze album and does not (normally) interact with the SD card. It may, however, be related to firmware or app version.

That said, the proper way to deal with this issue it to submit a support ticket. If Wyze gets enough tickets on the same topic, that is how they become aware of any widespread issues. If you file a support ticket and are not getting an adequate response, then post the ticket number here and we can try to get it escalated.

It’s not a big deal and I have had a ticket for almost a year. Never did get resolved. I think it’s one of those sporadic things that are near impossible for tech support to diagnose or address.

I would almost bet a replacement camera would fix the problem.

I thought so too. But now that I am actively looking ALL my Wyze cameras have episodes of being unable to take pictures. None have issues with event recording to the cloud or streaming video both locally or when I am out of the house. And SD card recording also works just fine. Very odd. Not fatal certainly but annoying.

Alright, this is a weird one. I’ll kick this link over to the team to make sure they’re aware. Thanks for flagging me!

It may, however, be related to firmware or app version.

Boom! I would guess this issue is a software issue or a connection sync issue. Imo

@sammyb when take pictures failed, could you help to submit a feedback in Account-> Help & Feedback → Submit a Log, please help to add my email address “schen@wyze.com” in the to list. We could check what happens in the backend from the log.
BTW, there is a known issue, when viewing the playback, and playback is pause, you will not be able to take photo at that time.

I sure will. Never tried to take a photo from paused playback but good to know.

Just sent a log. Oddly the app crashed when I added your name to the email the first time but went fine the second time.

Sent another log, tried another camera and it also failed.

Got the log, thanks a lot ! BTW, I think the crash is not because of my email

, We will also check for that.

hopefully not! I think it’s probably something unrelated.

@rbruceporter thanks so much for the log, for the log we found the take photo failed could be related to screen too dark, we have some algorithm that prevent to take a all black picture, if it is possible, could you take a try for this version of app and see if it could resolve the issue when the scene is too dark.
http://d.6short.com/appts

And this fix will also be available in next release app.

Got it! I will give it a try tonight when it gets dark here. That certainly makes sense. I use an external IR illuminator at night.

I was able to take a photo with the camera at night and have attached it. Thanks very much for your help! 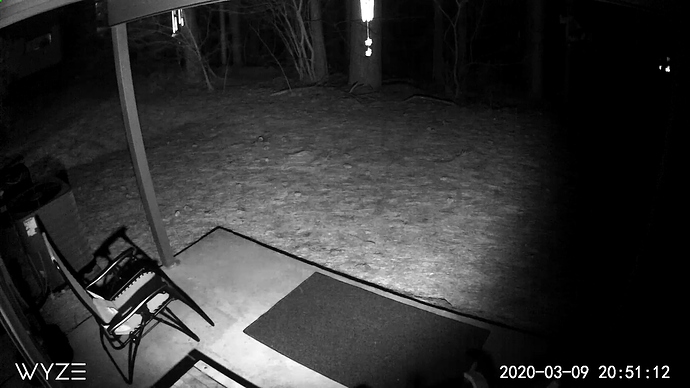 3 posts were split to a new topic: Shipping discounts and Wyze stock?