Cam V3 notifications and Person detection unreliable. Anyone else?

I have two Wyze Cam v3 cameras with Cam Plus set to Person detection and push notifications. Despite this the software does not tag what is obviously videos with people, and even when it does I sometimes will not receive notifications. This has been occurring for at least several days and I opened a support ticket about the notifications but have not heard back. Wyze’s Service Status and Known Issues lists a very similar known issue that was supposed to be fixed on April 10. I’m curious whether anyone else has similar problems. In the past few days I’ve found at least 8 videos with a person in it that were not tagged Person and of those that were properly tagged I have an arbitrary loss. April 26 was the worst as most of the time I was not notified.

Concerning the person detection, the videos are almost all the same, yet sometimes they are not tagged person. Essentially it’s a person walking up or down the driveway and maybe getting into or out of a car. They are all very similar and I suspect it is not the AI that is at fault here but instead something to do with the AI not actually being run on the video. In other words a bug.

Concerning the notifications for videos successfully tagged as Person, they seem to be missing arbitrarily. I’ve never had this problem with any other apps that I can remember. I have a debugging app installed that logs all my notifications and I’ve compared the Wyze notifications that I’ve received to the Wyze events. Here’s are the events for two recent days and whether I received a notification in parentheses. (Note cam2 triggers a smart alert which is a separate notification.)

My V3s do fairly well at identifying people and vehicles, but I, like many others have reported, have problems with missing and/or delayed notifications. I have found that AI notifications are much more reliable and timely if “All Other Motion Events” is enabled in the Notifications settings. This, of course, causes a lot of unwanted notifications, pretty much negating the usefulness of the AI feature.

What is somewhat interesting is that I have a rule set up to turn on a light connected to a Wyze plug, which is triggered when a person is detected. It has always worked well, with very little delay. But notifications from the very same events on my Android devices are very unreliable, unless “All Other Motion Events” is enabled as mentioned above.

Thanks. I also have an android phone. I agree that enabling all motion notifications negates the usefulness. The camera is tripped by any light or tree movement because I have detection set high. OTOH if I set it low it then sometimes doesn’t detect the motion I want (people).

Unfortunately, all of the complaints here and on other forums seem to fall on deaf ears. I don’t believe I’ve even seen an acknowledgement of the problem by Wyze, Probably too busy getting the next new product out the door, like the recent floor lamp.

I am having similar issues.

Can you share your App Version and FW versions on the V3’s?

I signed up to be a Beta Tester for the app and load the Beta FW as well. I am not experiencing this issue with my V3’s. Notification is little longer than the V2, but a recent update seemed to have made this difference minimal. I will say that the iOS app provides alerts faster than the Android app. Seems to be 7 to 30 seconds difference.

I’m using Wyze App v2.19.15 and firmware 4.36.0.280 on two V3 cameras. In App Settings there is an option ‘Running in the background’ which is off. It basically says allowing the app to run in the background “can keep receiving the notifications” and requires a persistent notification which makes no sense. I don’t understand why Wyze can’t just have reliable push notifications like every other android app.

This evening I walked in the motion zone at night and was detected as a person but no notification. That is, until I opened the app 20 minutes later. At that time the notification was delivered and quickly removed. 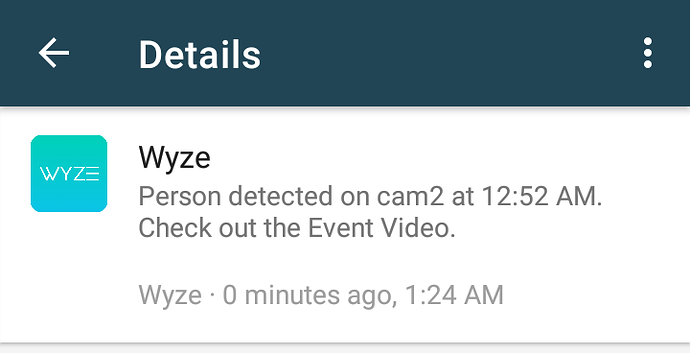