Very simple. He bought the item from another seller for a higher price. Then he’s asking Wyze to refund him the higher price. I said nothing about honoring the warranty. My beef is with that particular statement.

Okay, except the only source for that assertion… is you? The OP said the camera was 9 months old and didn’t say where it was purchased. As noted, whether it was from Wyze (who sure were still selling V2s 9 months ago) or an authorized seller, the price paid is irrelevant to Wyze honoring the warranty. The excerpt posted said they will get back whatever they paid if no fix is available. Not sure why you’re assuming it was bought gray market or something.

You can pretty much infer that he didn’t buy it from Wyze. Wyze never sold the V2 for $30.

So maybe he was rounding up about the $30. Or exaggerating. Or maybe he bought it for $30 from HomeDepot or Amazon or any number of other places. It doesn’t sound like an outrageous selling price at all, particularly if that includes tax and shipping. 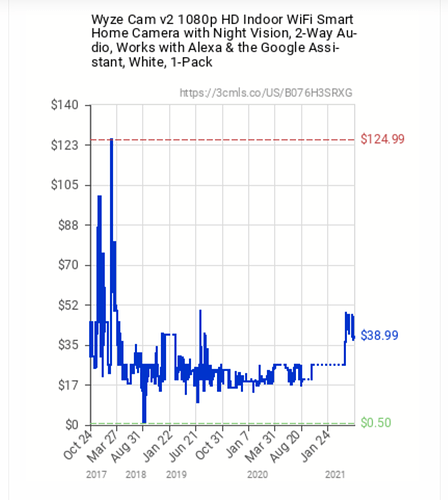 I just gave you an example where it could have been $28 and you are hung up that they said $30? Maybe they gave a round number instead of not posting the specific dollars and cents of the transaction for brevity.

The OP never said original purchase was $30. What was said was if Wyze wouldn’t provide a replacement they should provide a credit of $30 so the OP could purchase a V3 as a replacement.

I never said $30 was outrageous. It’s that he paid it to another company and he wants Wyze to refund the extra amount as well.

I never said $30 was outrageous. It’s that he paid it to another company and he wants Wyze to refund the extra amount as well

Which is exactly what their warranty says they will do?

The warranty is to replace the item, not refund the markup that a 3rd party added on top of Wyze selling price.

For the record I find it kind of hilarious what an argument we’re getting out of some dude’s five dollars.

Honestly I’m not sure why I’m responding. They ended up giving the OP more than $30 by crediting them for a v3, which are the terms they list out in their warranty anyway.

Just in general, as long as it was an authorized reseller the cost is moot for warranty, Wyze has the right to choose repair or replace when honoring their warranty, and they could just elect to replace with a v3 like they did instead of providing a refund.

The warranty is to replace the item, not refund

So now you’re saying Wyze should replace the camera?

I never said that Wyze shouldn’t, check my responses. I just find it unreasonable to expect Wyze to cover another company’s markup.

You might find it unreasonable, but Wyze didn’t when they wrote the warranty. It’s not open to interpretation.

Wyze will, at its sole option, either (a) repair or replace any defective Product or component or (b) accept the return of the Product and refund the money actually paid by the original purchaser for the Product to the payment method used by the purchaser.

under no obligation to replace it with a V3

I never said that. Quote the relevant text.

If anyone wants these black v2’s Micro Center still has a ton of them for sale at this price. Of course, you do have to live by a Micro Center to get them though.